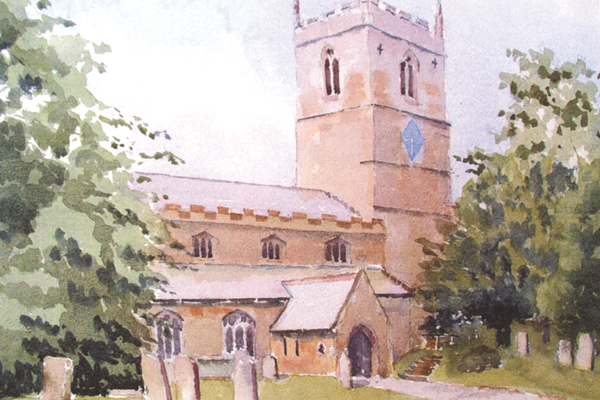 Words by:
Alan Middleton Featured in:
May 2012
Share Article

The Lincolnshire Wolds town of Caistor has probably been an inhabited place for at least 7,000 years and there is evidence of continuous occupation since the first century AD. Caistor was a fortified town in Roman times and was the site of a Roman camp; many vestiges of Roman occupation can still be found in the town. The Roman road, Ermine Street, passes nearby and another important road is the ancient High Street, which runs from Caistor to Horncastle.
The railings around Hestcroft House in Church Street include a sword, said to be the one used to rally demonstrators in the 1536 rising, when Lincolnshire people rebelled against the religious policies of Henry VIII. In the church of St Peter and St Paul can be found ‘the Gad Whip’, probably a goad for driving oxen. For more than three centuries this was part of a peculiar ritual involving a man from Raventhorpe cracking the whip and holding it over the vicar’s head during the reading of a lesson on Palm Sunday; a tradition started in 1536, the year of the uprising. However, the Victorians disliked the practice and it ceased in 1846. Much of the town was destroyed by a great fire in 1681, which cost the lives of several inhabitants, so the present buildings in the town centre date from that time. One of the gems of Caistor is its water springs, perhaps the best being Syfer Spring in Fountain Street.

The Caistor Palmsun Fair, held from time immemorial on the Saturday before Palm Sunday, for the sale of sheep and cattle, was an institution famous all over England and it continued until the 1930s. The largest sheep fairs in England were held in Caistor. These were very big in the first part of the nineteenth century; the biggest of all being in 1858 when more than 60,000 sheep were sold. At the time of the fairs, many inns were required to deal with all the buyers and sellers. One such establishment was the Talbot Inn, in High Street which was built on older foundations in 1642.

Fast forward to the twenty-first century and changing times and drinking habits led to the closure of the pub, which started to become derelict. It was then acquired by Lincolnshire Co-operative and converted into a modern convenience food store which opened in 2010, retaining the front of the old Talbot Inn. During the pre-planning process six sets of human remains were discovered and, after consulting the planning authorities, Pre-Construct Archaeological Services Ltd was appointed to undertake a dig on the site. At the end of a five-week excavation, sixty sets of human remains had been found, all believed to be Roman, including complete skeletons.

Pre-Construct director, Colin Palmer-Brown, said: “The graves are orientated east to west, with the heads to the west, which fits well into Christian tradition. There is also an absence of grave goods such as brooches, which is consistent with Christian burials.” Mr Palmer-Brown also suggested that the cemetery dates back to the late Roman period, around the fourth century AD, after the Emperor Constantine legalised Christian worship in AD 313. Shards of pottery found alongside the graves strengthened the case for this being a Roman cemetery.

The human remains either have, or will be, reburied or left undisturbed in situ. Pottery and other artefacts have been donated to the new Caistor Arts and Heritage Centre at 28 Plough Hill.