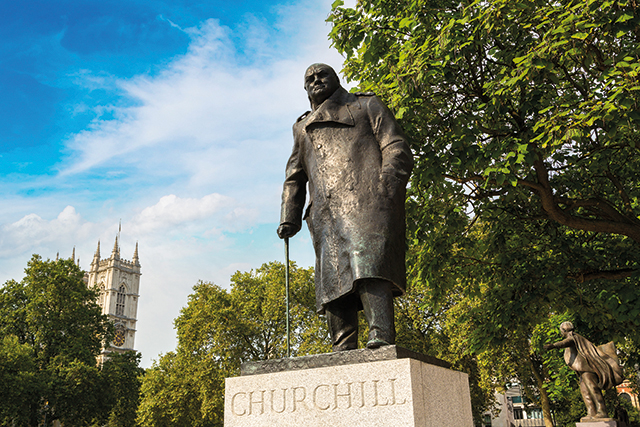 Alan Middleton tells the story of how news of the end of hostilities in May 1945 was received in the city of Lincoln.
It was the news they had all been waiting for, and when they heard the familiar voice of Prime Minister Winston Churchill booming out from radios and hastily constructed public address systems at 3pm on Tuesday 8th May 1945, this is what they heard: “Yesterday at 2.41am, the representative of the German High Command, General Jodl, signed the act of unconditional surrender of all German land, sea and air forces in Europe, to the Allied Expeditionary Force and the Soviet High Command. Hostilities will end officially at midnight tonight… The German war is therefore at an end.”

They listened largely in silence but then the whole country erupted. Scenes of wild excitement, the likes of which had probably never been seen before, engulfed the city of Lincoln and every other town and village in the county. Thousands of deliriously happy people spilled out onto the streets. In Lincoln, the largest crowd congregated between the Stonebow and the old Midland railway crossing at St Mark’s station. Some stood in groups singing the songs that had helped get them through the war, others danced a dance of sheer happiness.

At 9pm it was off to the South Common to witness the lighting of the city’s gigantic bonfire by the Mayor, Councillor Harold Bennett. As darkness fell, dozens of other bonfires could be seen around the county. Just after midnight a few jeeps arrived and scattered thunderflashes and fired off flares and rockets.

People were said to have been in an atmosphere of pure joy and relief.

The party continued into the next day and night, as even larger crowds danced in the High Street to music provided by gramophone records amplified through loudspeakers outside the Guildhall and Stonebow. The Usher Gallery was floodlit and searchlights figured prominently in the celebration. There were two at the Cathedral, one at the Ritz cinema and another on Thornbridge.

The scenes in Lincoln on those two nights were such that they have lived in the memories of those present for all time. A huge service was held in Lincoln Cathedral on VE Day and at many other churches throughout the county. Another important feature of the celebrations was the tea parties, aimed mainly at the children but the adults enjoyed them too. Among the delicacies on offer were fish paste and potted meat sandwiches, jellies, blancmanges, and perhaps even a bit of cake for the lucky ones. It was even said that ice cream appeared at some parties. Maybe not what we would regard today as a lavish spread but for those days it was mouthwatering stuff and brought a twinkle to many a young eye.

Many of these parties were held in the street using trestle tables but church and community halls were used as well. After the food it was singing, dancing, sports and games. In some streets, pianos were borrowed and there were a good variety of makeshift drums.

The Mayor and Mayoress visited as many of the street parties as they could and the revelry continued long into the night. Toddlers were allowed to stay up well past their normal bedtime. The Skellingthorpe Road children had their party on the Coop sports field, in Reepham it was at the Fox and Hounds, while Robey’s canteen was used for Canwick Road. I’m not sure how much the younger children understood what was going on, but we certainly enjoyed ourselves (I was not quite 4).

And there’s one more thing people remember about those incredible days: the specially decorated Lincoln Corporation double-decker buses. They were decked out in red, white and blue, with the flags of the Allied nations painted on the side.