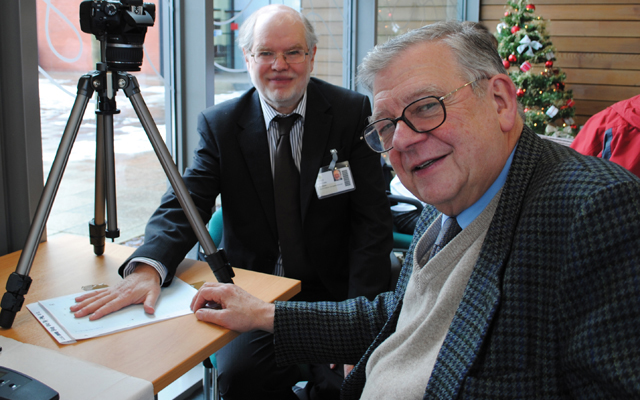 Who the DNA do you think you are?

A scientific study exploring how our history lives on in our DNA is putting Lincolnshire under the microscope – and it could hold the key to future breakthroughs in medical research…
The people of Lincolnshire are playing a starring role in a major scientific study which aims to produce a genetic map of the British Isles which will guide researchers in their quest to better understand the causes of hereditary diseases.

A team from the University of Oxford’s ‘People of the British Isles’ project is working with a legion of local volunteers who are providing DNA data which could prove pivotal in future medical research.

The work is also uncovering insights into how Britain’s complex history of invasions and migrations has shaped its people through the genetic variations that still exist today in different parts of the country.

The research project, launched five years ago with funding from the Wellcome Trust, has already seen more than 4,000 blood samples taken from volunteers in rural locations across the UK, including almost 200 from Lincolnshire.

The samples, which are anonymised so cannot be traced back to individuals, provide an important ‘control group’ for medical researchers looking to identify genes responsible for certain diseases and are already being used in several important studies.

In December the researchers returned to the University of Lincoln to meet up again with some of the Lincolnshire volunteers. They will make another visit to the county in May this year when they stop off in Grimsby.

Dr Bruce Winney, from the People of the British Isles team at the University of Oxford, said: “We are going back to our original volunteers who have already given blood samples and asking them a series of questions, such as whether they are left or right handed, whether they can roll their tongue – even whether they like the taste of Marmite! We are also taking 3D photos of their faces. By doing this, we are hoping to find the genes involved in normal variation, such as facial features like the shape of the nose or the size of the forehead.”

Britain’s rural populations are central to the success of the People of the British Isles project. This is because the task of identifying the genes responsible for diseases is complicated by the influence of invasions and migrations on people’s DNA. By mapping out the genetic traits seen in rural locations like Lincolnshire, where families can often trace their roots back for generations, scientists hope to untangle the effects of history and geography from their studies of disease.

The University of Lincoln has been collaborating with the Oxford team for several years by collecting blood samples from Lincolnshire people. To be eligible for the study, volunteers had to show they, their parents and their four grandparents were born in the area.

Dr Ron Dixon, Head of Natural and Applied Sciences at the University of Lincoln, said: “We thought Lincolnshire would be important to this study because historically it is an agricultural area and people stay with the land. It was not too difficult to find volunteers who had four grandparents born in the area. In fact, we found people whose families had farmed the same land since the seventeenth century.”

The initial data has revealed how Lincolnshire and the eastern counties of England were heavily influenced by the Anglo Saxons, who arrived from what is now the Danish peninsula and northern Germany in the fifth century, as well as the Danish Vikings who arrived 400 years later. Other geographic areas have different stories to tell through their genetic make-up. For instance, the DNA samples taken from volunteers in Cornwall show they retain strong Celtic roots, as do residents of the Orkney Islands, who also exhibit the influence of Norwegian and Russian invaders.

Principal investigator on the People of the British Isles project, Professor Sir Walter Bodmer of the University of Oxford, said: “All the genetic data that we have collected is being maintained as a resource for future medical research. It’s a sort of genetic map of the British Isles.

“At the moment this second stage of our research may not have direct medical significance – our interest is in the basic science – but in the future, who knows? We may be able to use a person’s DNA to reconstruct their face, or identify genes that when seriously disrupted cause severe abnormalities.”

For more information on the project, contact Tammy Day at the Department of Clinical Pharmacology, University of Oxford, on Tammy.Day@clinpharm.ox.ac.uk or 01865 863819. Alternatively visit: www.peopleofthebritishisles.org