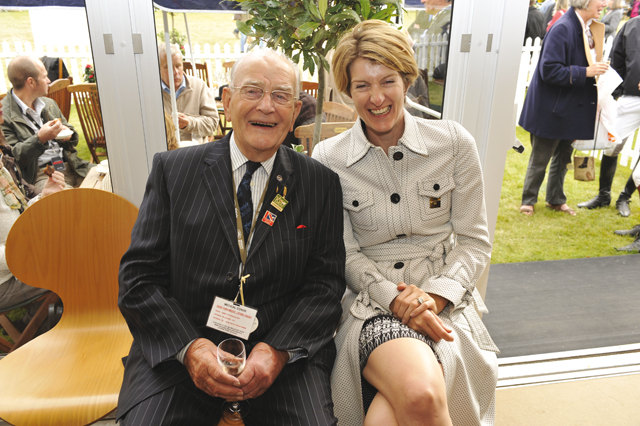 “It certainly doesn’t feel like fifty years have passed since I first went to Burghley,” says the jaunty 85-years-young Roy Bird MBE, who half a century ago was asked by the late Lord Exeter to join the committee of the first Burghley Horse Trials.
Roy, then secretary of the Peterborough Agricultural Society, was asked to assist with the stewarding of the grandstands and selling tickets. “It was not the sell-out it is now, but then the whole story of the Burghley Horse Trials is one of immense success and due to a great team effort,” says Roy, who hasn’t missed a committee meeting or an event since.

Roy, born in March 1926, has seen three generations of the family at Burghley House lead the now famous horse trials – the first being David George Brownlow Cecil, Sixth Marquess of Exeter and also MP for Peterborough.

“As an Olympic gold medallist he was especially popular – he had amazing personality and charm,” recalls Roy. “There has always been a great family atmosphere at Burghley – everyone enjoys it and the horse trials has grown bigger and stronger every year. It is a remarkable event and has made an enormous contribution to the sport of Eventing and the Lincolnshire community.”

It was during his six years in the army that Roy had his first, if inauspicious, equine encounter. “As I was stationed alongside the Royal Horse Guards in Minden I asked if I could have a ride,” recalls Roy – unsurprisingly then known as Dicky. Accompanied by a senior, his first horseback excursion was to collect eggs from the local farm. On the return journey the bag of eggs was handed to Roy while the officer took off for a gallop. It was not long before the hapless Roy was, as an unwilling passenger, following suit. “The eggs were everywhere and I was so sore afterwards I had to see a medic,” he laughs, enjoying the recollection of this funny spectacle. However, the experience didn’t put him off and he continued to ride and eventually, after leaving the army, he and his wife Norma, who he married sixty-five years ago, kept their own horses.

It was after army life that Roy’s life turned towards the agricultural and equine and in 1948 he was initially appointed assistant to the secretary of Peterborough Agricultural Society. Twenty years later he was made chief executive when it became the East of England Agricultural Society and he was involved in the development of the showground at Alwalton. Roy was also appointed secretary of the Royal Peterborough Hound Show and was initially proud to be offered the post of secretary of the Shire Horse Society only to be told, “It’s no honour Sir, they want you to wind it up.” To Roy’s satisfaction, the society, dedicated to horses now considered ‘at risk’ by the Rare Breeds Survival Trust, has survived.

“In terms of attendance the show is the biggest breed show in the world and the society now exports horses world-wide,” he says proudly.

In 1969 he was awarded the MBE for services to agriculture and the horse world and is now Honorary Life Vice President of all three societies. “Through all these societies I have been lucky to have met many incredible people and that has made all I’ve ever done, which admittedly at times has been very hard work, so enjoyable.”

At this year’s 50th Anniversary Burghley Horse Trials, the ever-busy Roy was presented with a specially painted plate in recognition of his service to the committee.

“I am extremely proud to have been a part of the event – which for many reasons obviously now bears no comparison with Burghley’s first horse trials. That is due mainly to a succession of wonderful chairmen and most importantly its directors. They have always enjoyed a great rapport with everyone involved and brought in many new ideas. It is no surprise that it has been awarded the title of best three-day event in the world on no fewer than six occasions.” However, it was at this year’s 50th Anniversary event that Roy particularly realised just how unique Burghley is. “As I was walking around the showground several people came up to me to say that, just like me, they had also attended the very first event in 1961. It is remarkable just how many visitors return year after year.”