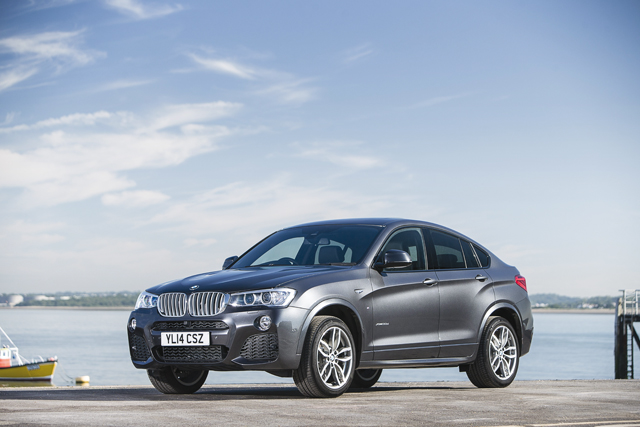 Its dynamic pedigree is underlined by a wide range of cutting-edge high-performance engines, the xDrive all-wheel-drive system and a high level of standard equipment. A choice of three diesel engines, a comprehensive package of BMW EfficientDynamics measures and the extensive connectivity provided by BMW ConnectedDrive are all elements in a driving experience which allows sporty performance and incredible efficiency.

DESIGN
The new BMW X4 follows in the footsteps of the BMW X6, visually combining the character of a Sports Activity Vehicle (SAV) with the sporting elegance of a classic coupé to create an unmistakable presence on the road.

Based on the same platform as the BMW X3, the BMW X4 displays a sporting character of its own. The large air intakes positioned on the outer edges of the front end and the character lines in the front apron lend the X4 a more muscular and agile appearance. This lowers the car’s visual centre of gravity, signalling its sharper dynamics. The effect is further enhanced by the fog lamps sited below the signature twin headlights.

The coupé-like roofline reaches its highest point over the front seats, reflecting the traditional driver focus of BMW cars, before dropping gently down towards the trailing edge of the boot lid. The standalone design of the BMW X4 is further reinforced by the fresh interpretation of the signature swage line running along the flanks of BMW models. For the first time this is split into two; the first section rises smoothly from the front wheel arches to the rear door handles, while the second part accentuates the powerful sculpting of the rear wings.

The contoured C-pillars, muscular shoulders and the broad and low-set rear end, hints at the performance of the BMW X4 before the engine has even been started.