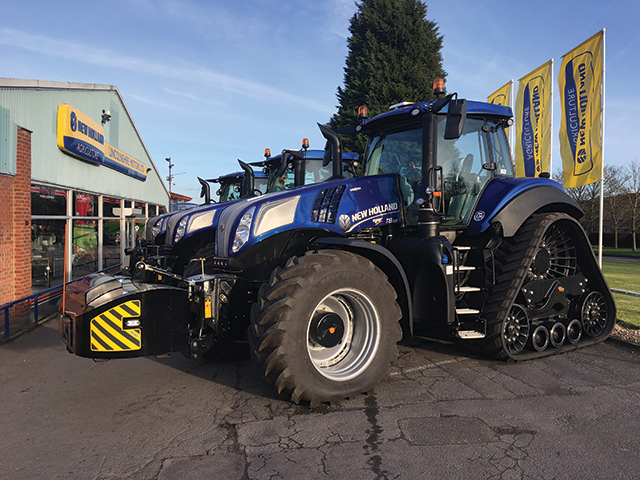 Consistency of service and staff has been the proud heritage of Lincolnshire Motors, explains director Kevin Bell, as the business gears up to celebrate its centenary this year.
Any company reaching this landmark will have some interesting statistics and an archive which illustrates the roots of the business but they are also a strong indicator of momentum for the future too.

2019 marks the 100th anniversary of Lincolnshire Motors being appointed a Ford tractor dealership based then in Grimsby. The ‘blue tractor’, which became known as the Fordson after its makers Henry Ford and Son, was first produced in Cork in 1917 and post WWI production grew quickly. The current agricultural machinery range is still manufactured in the UK at Basildon by Fiat under the New Holland badge.

“The bonds we have forged with our customers cover generations of Lincolnshire farmers,” said Kevin. “My father, Eric Bell, started as an apprentice with the business in 1957 and rose to be MD of the Ford franchise Hartford Motors and chairman of Lincolnshire Motors Ltd. I have accrued twenty-seven years so far but even so I have dealt with three generations of some families – sometimes all at the same time!

“Our most outstanding statistic is that our four most senior technicians, who have been with us since they were taken on as 16-year-old apprentices, have together over 185 years experience of servicing and repairing New Holland machinery. That consistency and depth of knowledge of the marque and also the relationships they have built with our customers is unrivalled locally.”

Lincolnshire Motors Ltd expanded to have additonal depots in Caistor, Welton (both closed in 1991) as well as Louth and Platts Harris, Brigg was purchased in 2003. With strong footholds in the central and northern sectors of the Lincolnshire arable heartlands the business operates a fleet of vehicles which are on call for breakdowns and repairs as well as fully stocked showrooms on the Louth and Brigg sites.

Kevin explained: “We have an exceptional product range in New Holland, proudly manufactured in the UK. Our mid-range tractors are especially suited for our market place but equally T8 SmartTrax crawlers are the highest horsepower vehicle of its type available. There is a seasonality to our business, which made our amalgamation with The Burdens Group in 2018 so logical. They are also New Holland dealers with a strong foothold in the vegetable growing and horticultural areas to the south of the county and together we offer coverage to nearly the whole of Lincolnshire, with a greater range of machines available to customers.”

The Burdens Group has its head offfice in Sutterton and depots in Wrangle and North Kyme as well as those in Louth and Brigg, which continue to operate as Lincolnshire Motors.

“One of the most important aspects of the amalgamation was to retain the staff of both businesses, ensuring the continuity of sales and service across the region,” said Kevin. “It has also brought new opportunities to the business in a competitve environment, with customers having the benefits from being part of a larger group while still retaining the feel of a local, family business.”

This has been the most recent chapter in the history of Lincolnshire Motors but the synergy between the businesses has exceeded expectations with a fuller range of New Holland products, particularly tractors, including the T8 SmartTrax, and a larger range of combines, telehandlers and baler products available from the Louth and Brigg sites. Combined with the Amazone range of sprayers, drills, spreaders and other tractor accessories, as well as Dalbo’s hydraulic rollers, and seedbed cultivators, the diverse farming community of the county in 2019 is exceptionally well served by The Burdens Group and Lincolnshire Motors, whose roots lie in the more humble Fordson.

Lincolnshire Motors will be celebrating their 100th anniversary in style at Lincolnshire Show on 19th and 20th June. They are the only exhibitor with a permanent building on the showground and their display this year will include vintage ‘blue’ tractors as well as the latest, innovative New Holland machinery.