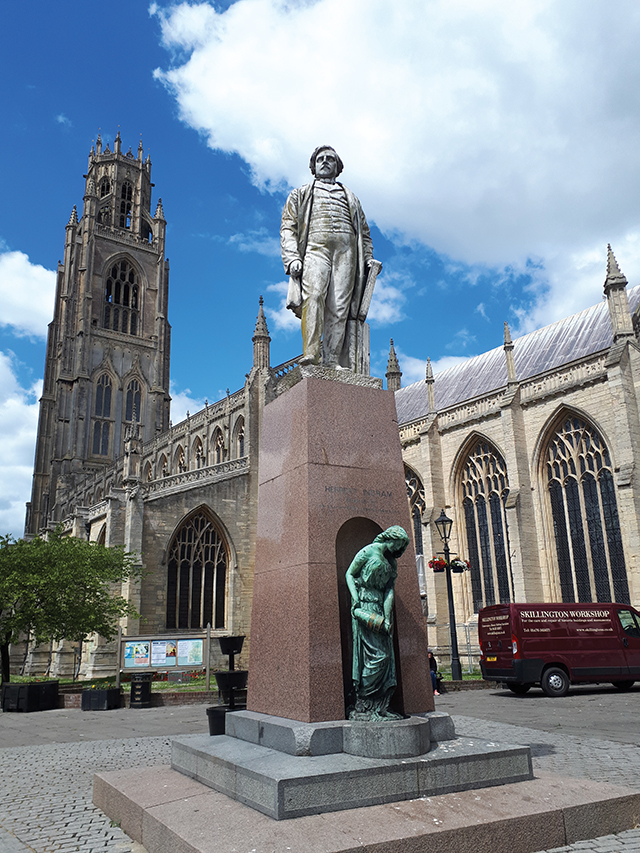 The town has a variety of public houses that will be looking forward to opening their doors once again in the weeks ahead – but even those former establishments that no longer remain have a rich history to tell, as writer and tour organiser Jane Keightley explains.

Pubs are having a hard time at the moment. Even before the coronavirus pandemic reared its ugly head, many were struggling to survive. I hope that, when it is safe to do so, people will be heading back to their locals in their droves after being stuck at home for months on end.

Not so long ago there were more pubs than you could count in Boston. There was no television and no technology. If you wanted to be sociable, pubs were the place to be and many years ago beer was safer to drink than water.

We had three big coaching inns: The Peacock & Royal, The Red Lion and The White Horse. The Peacock and Royal stood where Boots is now in the Market Place and was very grand. Indeed a member of the Royal Family had stayed there overnight once, hence the ‘Royal’ in the name. The Red Lion stood in Strait Bargate and was once a medieval tavern. It was replaced by a new Woolworths store. The White Horse in West Street succumbed to the same fate, being replaced by Keightley’s shop. However the White Horse statue on the front was saved and can be seen in the garden of Fydell House in the town. It is such a shame that we have lost these beautiful old buildings.

Happily some places are still about and are hopefully beginning to welcome customers back. The White Hart is one of these and it has an interesting story too.

It originally occupied the whole of what is now Bridge Street, with the yard going through to Furtherend Lane, which is now West Street. It moved to where it is now in 1805 and replaced an inn called the Unicorn. Quite a while later, probably in the late 1950s the taller part next to the river was acquired adding a lot more rooms to the hotel. This building had for many years been the office and stores of the Boston Water Works Company, a Rate Collector’s office, a library and a potato merchant’s office.

One pub that always intrigued me was The Ostrich. This stood in front of Boston Stump along with the town jail. It was demolished and eventually the statue of Herbert Ingram was placed on the site.

Down towards the end of Wide Bargate, in the direction of the Maud Foster Drain, stood The Red Cow and The Ram. Back in the days when the cattle markets attracted farmers from all over the countryside they would be heaving. They would have had their own stables and breweries on the premises.

Another establishment that is no longer around is The Three Loggerheads. It was a very old pub that stood opposite Shodfriars Hall. Its sign featured three angry men in Elizabethan dress. It closed in about 1960 and was demolished for road widening purposes.

In the days before Boston United had its entrance in York Street and was in Shodfriars Lane, the teams used to change at The Loggerheads and run down the lane in their kit. There were no bathing facilities – they washed in a bucket!

During the First World War the pub was the receiving point for donations and food parcels for interned fishermen in German prisoner of war camps.

The Stump & Candle on the corner of the Market Place and Church Street also has a fascinating history and has changed its name on numerous occasions. Back in 1517 it was known as The Bell and it was here that John Foxe was born, author the famous Book of Martyrs. The pub known as The Bell stood there until about 1780 when it was replaced by the present building.

From about 1850 it was known as The Rum Puncheon and it is known that it opened its doors at 5.30am in the winter to serve hot coffee and rum at 2d a mug to the workmen going to work at 6am on the boats and in the warehouses on the riverside. This must be where the name came from.

I can remember it still being The Rum Puncheon in the early 1970s but since then it has been called The Angel & Foxe, Martha’s Vineyard and now The Stump & Candle.

The Three Tuns pub, which stood on the west side of the Market Place, about where the Seventh Heaven Café is now, is believed to have had one famous visitor. It is said that Oliver Cromwell lodged there the night before the Battle of Winceby. The whole of that side of the Market Place was demolished and replaced with a crescent of shops that still stand today.

The building which is now the New England in Wide Bargate was built in about 1830 to replace the old Cross Keys Inn. The land next to the inn was once occupied by the cottages and gardens of the Bedesman of the Guild of St Peter, whose symbol was the cross keys. It was still known as The Cross Keys until 1969 when it was enlarged and turned into a hotel with its new name of the New England, which alludes to our North American links.

Once I restart my tours again I shall be doing a tour about the history of Boston pubs on the fourth Sunday of every month. No, you don’t have a drink in every one but you will hear many interesting stories about the pubs of Boston both past and present. The ones that I have recounted here are just a few of the tales that I have to tell.