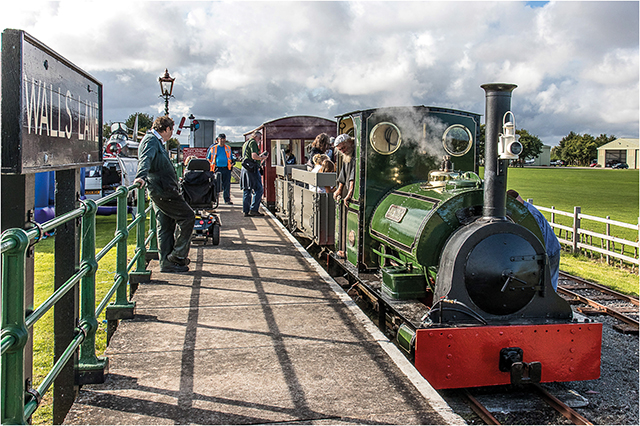 All aboard! To celebrate the Lincolnshire Coast Light Railway

Caroline Bingham bagged her place as first passenger of the year on a pre-season run heralding an anniversary year for the narrow gauge line.
The Lincolnshire Coast is still synonymous in many minds with bright lights and the razzmatazz of the bustling resorts but step out from the main centres and the natural and heritage attractions of the Coast are coming more into the spotlight.

Here at Lincolnshire Life we love a trip to the Coast, whatever the season and have already featured this year the new North Sea Observatory. Last month I spent a thoroughly enjoyable morning meeting the volunteers and enthusiasts behind the Lincolnshire Coast Light Railway. They all bring a wide variety of skills to preserving, restoring and running a large rolling stock of engines, wagons and carriages; several of which were manufactured in the county and had working lives on private estates or industrial narrow gauge lines in Lincolnshire.

Volunteer Chris Bates was my guide for the visit and briefly explained the origins of Light Railways: “The width between the rails is less than those of main railways, in the UK that’s 4′ 8½”. Before the First World War they had been developed to serve industry, mines and quarrying and were ideal for accessing out-of-the-way places. The British military were slow to realise the potential in the conflict but once they did, hundreds of steam and petrol locomotives were manufactured plus adapted wagons for carrying men, armoury and supplies as well as ambulance vans for bringing the injured servicemen back from the lines.”

After 1918 most of the lines were redundant and stock and rails were sold off. Some were exported as far as India and Australia while others found their way to Lincolnshire. Ideal for operation in remote, wet areas of the Fens, the largest system was the 23 miles of the Nocton Estate Light Railway where it was used to transport potatoes, crops – even post; plus a line to deliver sugar beet to the Bardney sugar factory.

By the 1950s the railway had started to contract as better roads were laid on the estate and lorries and tractors became the load haulers of choice. Inspired by the revival of interest in narrow gauge lines, especially in Wales, in 1958 a group of enthusiasts chose a site at Humberston near Cleethorpes and bought 700 yards of track, a Simplex locomotive, some bogie wagons and four-wheeled wagons to establish the Lincolnshire Coast Light Railway. It opened in August 1960 as a public transport link between the bus terminus, the beach and the Fitties Holiday Camp. It was an instant success carrying 60,000 passengers a year.

Its unique status as the world’s first ‘heritage’ railway on a new site took a few years to be recognised. In 1961 a steam locomotive ‘Jurassic’ built in 1903 was purchased. It was built in Bristol and had operated in a lime works in Warwickshire. A Lincoln built Ruston & Hornsby diesel locomotive was also added to the rolling stock.

Despite its initial success, by 1967 a rival minibus service had taken much of the passenger traffic and pressure from the landords, the local district council, saw the line relocated a short way south, extending further into the Fitties. Passenger numbers continued to fall and after the trackbed lease was not renewed by 1985 the site had been cleared and much of the equipment and rails were put into store at Burgh-le-Marsh.

Some rolling stock was handed over to the LCLR Historic Vehicles Trust to renovate and display in the Museum of Army Transport in Beverley. When that venue site closed, ambulance vans and some wagons which were now appreciated as valuable parts of Lincolnshire’s heritage were relocated to a member’s property near Mablethorpe.

“It all seemed over at that point,” continued Chris, “but with hindsight it was just the beginning for what has been dubbed the ‘Lazarus Line’. The developers of a new and innovative holiday centre at Ingoldmells were offering a home for an attraction on their site. The owners of Skegness Water Leisure Park gave and have continued to give generous support for the relocation and development of LCLR which ‘rose from the dead’, reopening here in 2009.”

In this 10th anniversary year of the re-birth of the line, the volunteers and trustees can look back on the significant milestones they have achieved. We took our railway ride in the Class D World War One wagon built by Clayton and Shuttleworth in Lincoln in 1917 which was used to carry shells but with the support of a grant from the People’s Millions was converted to a disabled-access carriage.

Restoration of Jurassic began in 2015 with money from the Heritage Lottery Fund and drew large crowds when she first ran again under steam in 2017, alongside the fields and Skegness Aerodrome which border the 1½ mile round trip. Princess Anne visited the site in 2017, accompanied by the Lord Lieutenant of Lincolnshire Toby Dennis, whose family created the Nocton Estate and its narrow gauge railway.

All this has been achieved through the hard work of a small group of volunteers. Several rode the track for my visit, the wagon pulled by Simplex 8874 diesel locomotive Major JA Robins RE. I met others in the large locomotive shed where some stock is stored and others are under restoration. It is a rail enthusiast’s, as well as small child’s, dream. Any one of Rev Awdry’s characters could be hiding in there, heady with the smell of engine oil and the camaraderie of the volunteers.

“The volunteers work mainly on Wednesdays and Saturdays. It can be very ‘bracing’ in the off-season but even during the bitter winter of 2017-18 volunteers extended the track using heavier, more modern rails we sourced in Carlisle. Sleepers came from the London Underground while the Ffestiniog Railway supplied track bolts.”

I boarded at the station, Walls Lane, which has a small waiting room and freshly painted platform railings. A new water tank is under fabrication in the shed ready to supply Jurassic with plenty of water while she builds steam. The volunteers take great pride in the authenticity but also immaculate presentation of the site.

2019 is the first of a series of anniversary years for LCLR and the public are invited to go along to enjoy a series of operational days. This season opens on Saturday 15th June when all the train rides are free (even on paid days the fare is only £1 per person making this the best value heritage railway in the UK – and probably beyond). The 10th Anniversary Re-opening Gala is on Saturday 13th July when Jurassic is planned to be in steam and as many of the diesel engines as possible will run.

From 13th July the railway is then open at weekends and some Wednesdays (check the website for details) until the end of August. The finale of the season will be on Sunday 15th September to coincide with the Annual Classic Wheels event adjacent to the Walls Lane station at Skegness Aerodrome.

I have put my prized 0001 ticket as the first passenger of the 10th anniversary year in a very safe place and must thank Chris and the other volunteers for their warm welcome. Go along and take the family to experience this fascinating insight into part of Lincolnshire’s transport heritage.

GET ON TRACK
More volunteers are always needed to help maintain and operate the railway. Membership is just £10 a year and donations towards the trust’s work can be Gift Aided. See the website for more details of how to become involved.