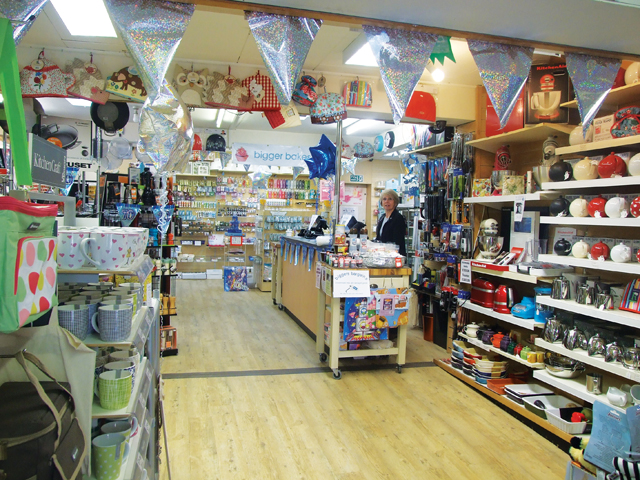 It is hard to believe that there is anyone who has ever driven or walked under Newport Arch, Lincoln and not had their attention immediately drawn to the beautiful window displays of Biggers of Bailgate.
Whatever the season or occasion there is a colourfully co-ordinated and immensely varied range of products on show, which still only gives a glimpse of the ranges stocked by this Aladdin’s cave of a shop.

Director, Peter Bigger is a second generation member of the family firm who has worked in the business for fifty years. “Well,” Peter explained, “the longest-serving accolade must go to my mother, Nellie Bigger, who with my now deceased father, Fred, bought 48-49 Bailgate in 1944 and established the shop when Fred, a Bomber Command veteran, was demobbed at the end of the war.”

Nellie, aged ninety-two, still occasionally comes into the shop to celebrate new milestones and catch up with their dedicated and long-serving team.

The business was an ironmonger’s and bicycle repair shop, where for the first few years the family, now with five children, lived above the premises until a move to a larger house in West Parade. Peter joined the business when he was sixteen.

He said: “I can remember clearly in 1957 the shop became double fronted and this was only one of the four extensions which have been made to the building over my lifetime.

“The business itself has evolved just like the building. We stopped doing cycle repairs and concentrated more on garden products and kitchenware. Our next change was a slow shrinkage of the gardening products to the shelves of treatments and accessories we now stock, so that we could expand our cake decorating, homebrew and bakeware ranges.”

What has remained constant is the level of customer service and knowledge that the Biggers staff give their shoppers.

“Simon Bilton and Susan Holtby have worked with me for thirty-three and twenty-eight years while co-director, and my nephew, Andrew Madden has notched up twenty years,” Peter continued.

“We are a friendly and flexible team who get very excited when Andrew orders new products and lines which we know are in demand and will be popular with customers.”

Currently the shop stocks between 8,000 and 10,000 lines, including cleaning products, cake baking and decorating items, cookware and utensils, pots and pans, linens, a key cutting and knife sharpening service, candles and much, much more.

So there is plenty of choice when Deborah Baker, who has been working in the shop and dressing those beautiful windows for fifteen years, comes to make one of her regular changes.

“We are immensely proud that the business has reached its seventy-year anniversary and that has been achieved by identifying products which we uniquely stock and can give the best back-up service to. We are not a hard sell team but we know customers will see the value of quality products.”

One of the biggest changes Peter has seen is the influence of television programmes and celebrity chefs on people’s cooking and baking habits. Trying to anticipate and keep up with the latest gadget or craze keeps everyone on their toes, but if the line can be secured Biggers know it will be a sell-out. The latest example of this has been cake lace, as used in The Great British Bake Off, which they now stock.

Newer members of the team are Dee Thompson (twelve years), Joanne Madden (four years) and marketing and e-commerce manager, Kate Edgar, who was brought into the company a year ago to launch and manage the Bigger of Bailgate e-commerce website.

“This has been a mammoth task,” said Peter, “and so far 3,000 of our lines are available, with more being added all the time.

“We only sell within the UK because of the problems with shipping some products, but we receive enquiries from very far afield including service personnel whom we can usually help through the BFPO system.”

So that showcase of a window is just a tantalising glimpse of the thousands of products which you can purchase instore or buy online from Biggers of Bailgate.

Peter summed it up when he said, “We have prospered by listening and responding to our customers’ requests and it gives us all a great deal of satisfaction that great products, traditional values and service are still so appreciated amongst the buying public.”