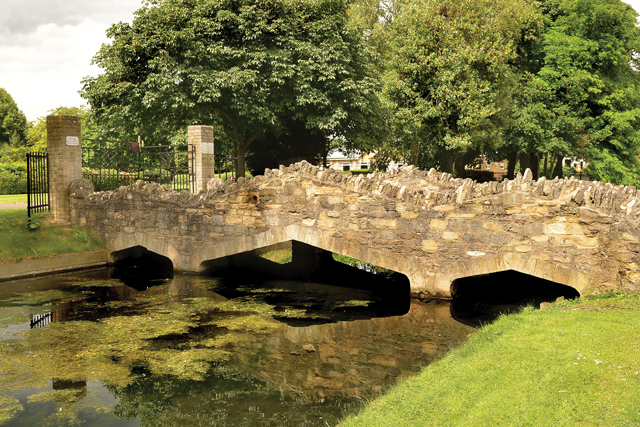 New homes and major investments are injecting extra vibrancy into an expanding South Lincolnshire market town.
Bourne, with its free parking, colourful floral displays and mix of shopping and services, never stands still and it is proud to be a destination where there is always something new to discover.

The finishing touches have been put on the £2.14 million Wherry’s Mill scheme – a mixed housing and retail complex aimed at helping to further regenerate the town. As we went to press, Lincoln-based chartered surveyor Hodgson Elkington said one of the seven retail units in the development was under offer and the agency had received interest in the others.

The growth of the Elsea Park and Abbeyfields housing developments on the south side of Bourne have led to a new school being built. The Elsea Park Church of England Primary Academy is due to welcome its first youngsters in September.

A new McDonald’s is taking shape in South Street, next to the town’s Texaco garage, signalling a bonus of sixty-five new full and part-time jobs later this year, and this part of Bourne continues to capture attention. In the town centre, Bourne’s traditional Thursday and Saturday markets add a dash of colour and act as an extra magnet for shoppers.

Bourne has many famous sons. It is the reputed birthplace of Hereward the Wake and associated with figures such as Charles Worth, who became a well-known fashion designer. Charles Sharpe, a farmer’s son from nearby Pickworth, was awarded the Victoria Cross for his bravery in The Great War.

One of the best known names is Raymond Mayes, founder of the motor racing marques English Racing Automobiles (ERA) and British Racing Motors (BRM), who certainly put Bourne on the map. ERA started in 1934 and BRM’s first car was unveiled in 1949 at Folkingham Airfield. Visitors can reflect on that period by dipping into the Baldock’s Mill Heritage Centre.

Town Clerk, Nelly Jacobs said: “We are very proud of Jade’s achievements. She was given the Freedom of the Parish of Bourne in a special ceremony in the town’s Corn Exchange Hall.

“Jade was also taken around local schools, where she really inspired many young people. Matt’s success is also much admired.

Mrs Jacobs said there is always something new happening on the business and social scene in a town which is also home to major food, drinks and service companies.

Creating a great first impression for shoppers and visitors is a top priority and this summer Bourne has been pulling out the stops and ‘saying it with flowers.’

“We have introduced extra floral displays with the help of The Len Pick Trust. One area that has been planted to good effect is the ground near the former public toilets in South Street, which features a newly-designed bed,” said Mrs Jacobs.

“The Trust also sponsored hanging baskets for the town centre by allowing traders to have them at low prices.”

Drivers will spot eye-catching floral planters at the entrances to the town too and Mrs Jacobs hopes that this year’s efforts will impress judges of the East Midlands in Bloom competition. Bourne has previously won silver gilt medals.

Adrian Smith of The Len Pick Trust, funded through the benefaction of a Bourne farmer and businessman who died in 2004, said it had been approached for assistance.

“Mrs Jacobs contacted us to see if we could help and, given that it is the 10th anniversary of the death of the late Mr Pick, who created the trust for the general benefit of the inhabitants of Bourne, we have,” he said.

The Trust funded the renovation of the small garden area in front of the old South Street toilets, work which was carried out on its behalf by Debbie Cooke who lives nearby and who recently won a silver medal at Chelsea.

“We were pleased to subsidise the cost of hanging baskets and we also provided two replacement ornamental trees, in the Market Place and Bus Station,” said Mr Smith.

Mrs Jacobs said Bourne Academy had also been doing its bit for the landscape, by creating three five-feet-high metal, wood and willow sculptures for the town’s Stamford Hill roundabout. They will be seen by visitors approaching and leaving Bourne on the west side of town, throughout the summer.

“In common with many other market towns, Bourne has some vacant shop units but we find that they don’t stay empty for long. The Wherry’s Lane development – which features retail units and private apartments, aims to revitalise Bourne further,” she said.

New arrivals include the fashion boutique Blue-eyed Dolls, but you will also find long-established family shops, such as the ladies and menswear store Jessie Bellamy and the hardware specialist Harrison & Dunn.

The Town Council is now looking to put the Town Hall and Library on South Kesteven’s District Council registers, so that if their current owner – Lincolnshire County Council – looks to sell them, the Town Council and community will be given six months to sort out its own bid for the buildings.

BOURNE TRADERS
Bourne’s position just a few miles from Stamford, Spalding and The Deepings means it attracts people from a wide catchment area.

Stores based alongside the A15, which runs through the town centre, are in a great position to get noticed, but visitors should also explore niche areas, including Angel Precinct, Crown Walk and The Burghley Centre.

One newer arrival, the fashion boutique Blue-eyed Dolls, has breathed new life into a unit in North Street, increasing the town’s choice in womenswear. It also sells accessories.

A few doors away, the well-established independent Jessie Bellamy offers different brands. Ladies appreciate the shop’s lingerie-fitting service and, in addition to its menswear ranges, the shop offers gentlemen’s evening and wedding hire.

Owner Caroline Creasey said: “We are continuing to do very well, but we are always looking for new things which we think will appeal to shoppers. We recently introduced the Bianca and Emreco brands, which are proving popular with customers.”

When it comes to treating yourself to a bit of sparkle or splashing out on a special piece of jewellery, Bourne’s Crown Jewellers, Moore & Scrupps and Hoppers are out to spoil.

“Matt works in the business full-time, creating bespoke pieces from scratch, by either remodelling old jewellery or making something new to a customer’s personal design.

“We are different to jewellers that are fully retail and which concentrate on buying in and selling ranges. Today, not many businesses have their own goldsmith on board,” said Cathy.

“Matt saw Jade Etherington get the Freedom of Bourne and noted how heavy her three silver and single bronze Paralympic medals were, so he went on to craft her a beautiful necklace, which features a glass pendant containing four discs representing those medals.”

Family jeweller Moore & Scrupps’ Bourne outlet is one of five owned by the business. Staff are happy to help customers to choose from an amazing selection of ranges, including Pandora, Thomas Sabo, Daisy and Dover & Hall. The newest arrival is Bouton jewellery. Moore & Scrupps also offers repairs and a valuation service.

Not all of Bourne’s enterprises are based in commercial premises, some business owners work from home. Vanessa Norcliffe became a Travel Counsellors franchisee in January, after taking redundancy from a national travel firm for whom she had worked for seventeen years.

It was a big move, but her services have proved a winner with family and friends. Now Vanessa is getting referrals from the wider community – which is how her business works.

“I enjoy using my knowledge and experience to offer a personal service and I can deal with anything from a family holiday to Butlin’s, to an overseas wedding party or a tailored package for a couple planning a luxury holiday taking in several different destinations,” said Vanessa.

Lorraine Cunningham of Set in Stone, in Pinfold Lane, is a traditionally trained signwriter, with a flexible approach to business.

“For many years I concentrated on signwriting, then the industry became computerised, so I trained in stonemasonry. I began doing memorials, which became the main part of my business,” said Lorraine.

“Now the signage side is expanding. My business has become more evenly split, since I invested in a new machine capable of colour printing, which means I am able to meet the increasing demand for products such as business banners.”

BOURNE BUSINESS CHAMBER
It’s been going for 8½ years, has seen its membership grow to about seventy members, and more business owners and managers are welcome to join.

Regular meetings of the Bourne Business Chamber take place in the town’s Wake House on the third Tuesday of the month, giving members and guests a great opportunity to hear speakers, network and share ideas.

The club was started by South Kesteven District Council’s Bourne Town Centre Manager in 2006, with a handful of members. A couple of years later the town’s Chamber of Trade & Commerce and Bourne Business Club merged, to create the Bourne Business Chamber.

In 2010 it was taken on by its current chairman, Landmark IFA Ltd wealth management consultant Paul Ross, along with Tim Armstrong and Kevin Hicks, who set about forming a committee to take it forward.

“At our first meeting I introduced two single statements: ‘We are a positive club – negativity is banned.’ Secondly, ‘You can criticise something, but you must be constructive afterwards’,” said Paul.

“This was greeted with a round of applause. We have therefore decided that this is the overall theme of the club.”

Paul said Bourne Business Chamber continues to attract interest from potential members, who can join for an annual fee of £40.

“I try and ensure our meetings are upbeat and entertaining. People are giving up a couple of hours of their time and I want to make sure it’s worthwhile,” he said.

“We have introduced two social events each year and choose a different local restaurant each time. The overall theme of our club is ‘buy local’ and this works because many of our members have gained a lot of business this way.”