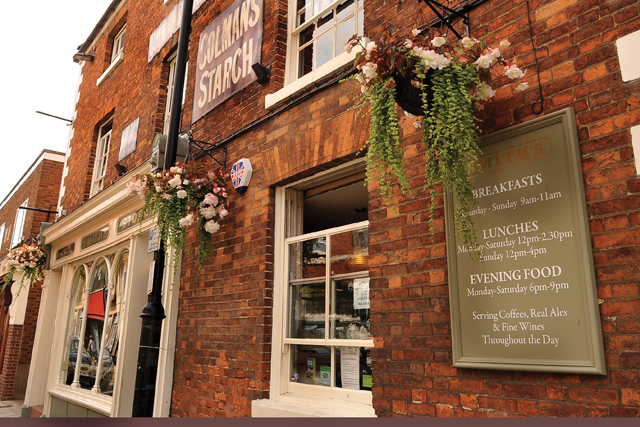 The Queen’s Diamond Jubilee and the highly successful London 2012 Olympic Games have served to bring back the feel-good factor in towns and cities up and down the country.
And the small South Lincolnshire town of Bourne is reaping the rewards, with traders and businesses reporting an optimistic atmosphere around the town.

Work is going on to revamp areas of Bourne in a bid to attract more investors and visitors and members of the public have been inspired by the London 2012 Games, bringing a welcome boost to gym and swimming pool usage.

A multi-million pound town centre redevelopment is underway, which will see the complete refurbishment of Wherry’s Mill and the construction of a new adjoining building featuring ground floor retail and commercial units and fourteen first and second floor apartments.

The £2.14 million project started in May and will be the first step in a much wider regeneration scheme which will also include the creation of an area of serviced land suitable for future development. The building works are expected to run until spring 2013.

He said: “Anything like that is good for the town. We have the lowest amount of shops vacant in the South Kesteven District Council areas and I am confident they will all be filled.”

Another development underway in the town is the creation of a one-stop shop for council services, including the library and South Kesteven District Council’s customer services.

Improvement work has been going on at the Abbey Road end of Bourne Corn Exchange since April and is expected to last for about thirty-two weeks. A second phase of works will see the development of the first floor into office accommodation.

Feedback from members of Bourne Business Chamber, which represents a diverse range of businesses from renewable energy and IT services to shops and alternative medicine providers, indicates that they have experienced a slow start to the year but things have been picking up recently.

“Generally it was a slower year. But things have improved significantly of late and the first few months of this tax year have been extremely busy resulting in the highest start of year turnover since LITES PC was launched in 2007,” said Taff.

There seems to be an optimistic air among the business community despite the double dip recession.

Carpet and upholstery cleaning specialist, Home Revive’s managing director, Tim Armstrong said: “Most businesses are aware of the current climate and the need to make savings, but the feeling I get from my customers is that given all the difficulties we are managing quite well.

“It is good to see people in and around Bourne mainly upbeat and positive. My business is buoyant and we hope to update our equipment to state of the art this year.”

“We have steadily grown this year into our new premises,” he said. “My business involves offering people around the Bourne area the opportunity to build an extra income to fit around their existing commitments.

“The company is having an extremely buoyant year. As an example of this, the business has grown by twenty-two per cent, compared to this time last year.”

Another group in Bourne which was formed to boost trade in the town is the Bourne Traders’ Association led by Gordon Cochran, of Gordon’s Photographic.

Mr Cochran said the high level of rents and rates for units in the High Street is a cause for concern particularly in the current economic climate and as a result he has just downsized from a shop in the High Street to one in a courtyard thirty feet away.

“The rents and rates for the High Street shop were driving me out of business. If the economy stays the way it is, there will be a few more folding,” he said.

“If the council, the government and the landlords cut rents and rates we might be able to regenerate a bit of life into the High Street. We have to make the High Street count.”

The Traders’ Association played a big part in the town’s Christmas shopping event which attracted more than 1,000 people into Bourne and the Association held a promotion event at Easter too, both of which were very successful.

“The shops have put up hanging baskets to make the town look a bit better and we are due to meet shortly to discuss our next promotion,” added Mr Cochran.

50 YEARS SINCE WORLD WIN
Damon Hill will be in Bourne to help celebrate BRM’s racing past.

The small Lincolnshire market town of Bourne seems an unlikely place to be linked with Formula One motor racing.

But it has had a long association with the sport, going back nearly seventy years when it was home to the British Motor Racing team (BRM) which won the 1962 Grand Prix World Championship, with racing legend Graham Hill at the wheel.

The 50th anniversary of that epic occasion is being celebrated in the town on 7th October with a BRM Celebration Day and son, Damon Hill together with a large number of the Hill family will be present for the milestone event.

The highlight of the day will be when Damon, who won the F1 title in 1996, climbs into his father’s car and makes a triumphant run through the route.

There is an exciting programme planned with most of the Formula 1 BRM models parading through the streets along with a representative grid of the contesting makes of cars for the 1962 season including Lotus, Lola and Cooper.

A cavalcade of 1962 road cars will be driven through the town and displayed while 1960s music will echo around the streets.

Carol Corliss, media and PR officer with the BRM Day committee, said BRM has helped put Bourne on the map and the Hill family are no strangers to the area.

“They were the first father and son combination to win the Formula One world championship. A large contingent of the Hill family will be returning to Bourne for the event.

“They used to spend a lot of time in Bourne and regarded it as their second home so they have a lot of memories from their time here.”

All proceeds from the event will be split equally between The Lincolnshire and Nottinghamshire Air Ambulance and The Bourne Outdoor Pool.

The town still has links with the motor racing industry through its specialist racing car manufacturer Pilbeam Racing Designs Ltd, whose managing director, Mike Pilbeam used to be chief engineer at BRM.

He said there were a number of local companies which existed because of the town’s links with BRM.

“We are here because BRM was here. There are quite a few other companies which have grown out of the existence of BRM in Bourne and that’s been fantastic for us because we have found lots of good local firms who have helped us with supplies and continue to do so.”

Pilbeam’s latest project is to build a new car for the Le Mans 24 hour race.

“Our cars race as Pilbeams at Le Mans and we have been commissioned to build a new prototype which it is hoped will take part in the BRM Day parade or at least be on the static display,” said Mr Pilbeam.

Bourne Heritage Centre located at Baldock’s Mill ensures that the town’s long association with motor racing and the BRM team are not forgotten. It houses a room filled with photographs, memorabilia and an impressive display of silverware won by BRM cars and drivers on international circuits.

BULL INN
The world’s much-loved longest running radio soap-opera, The Archers, attracts 25 million listeners. Its fans look on its home as being Inkberrow in Worcestershire, but the original inspiration for the programme actually came from a small village just outside Bourne.

In 1946, radio producer Godfrey Baseley visited Rippingale to interview Henry Burtt and his son Stephen as part of a radio programme called Farm Visit which later led to a conference being called to develop ideas to make farmers move with the times.

After much discussion, Mr Burtt suggested what was needed was farming’s answer to Dick Barton – Special Agent, which was the most popular radio programme of the day.

Baseley followed this up in another meeting with Burtt in Rippingale and it proved to be the catalyst for The Archers.

The village’s pub, the Bull Inn, shares similarities with the local hostelry in The Archers and it has even named its meeting room ‘The Archers’, after the programme.

Proprietors Sue and Eben Atkinson bought the High Street pub ten years ago and carried out a total revamp to transform it into the traditional country pub it is now.

It not only serves award-winning food and fine real ales but offers accommodation, meeting facilities and a function venue.

“We serve traditional food making everything ourselves with fresh ingredients but can also do nouvelle cuisine, à la carte and bar snacks,” said Sue.

Sue has played a huge part in community life having been a school governor and church warden in the past. An outreach post office is also run from the pub and it has just supported the village Beer Festival by donating a barrel of beer.