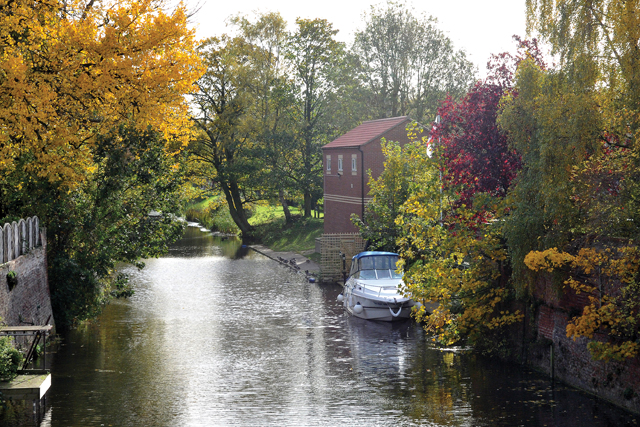 This North Lincolnshire town has a formula for community and business success which required closer inspection.
Initial appearances can be deceptive – catch this market town on a quieter day and you may, inadvertently, decide it is a rather sleepy place.

But, on closer inspection, you find that Brigg contains quite a few surprises, including a wealth of quaint and highly individual businesses along its main streets and tucked away in its courts and yards.

Fascinatingly, here is a town which has managed to cling on to many of its family-run enterprises, where similarly sized destinations have failed, so this could be a good place to find that unusual Christmas gift!

Brigg is also the place to find good schools, numerous organisations and clubs and longstanding traditional events too.

The town’s Mayor, Councillor Ben Nobbs said that there seems to be something for people to do every day of the week, provided they have the time and energy.

“At the moment, Brigg is actually doing very well, despite the general slowdown.

“It does not seem to have suffered like other places. We have a lot of independent businesses in the town and they are holding up well,” said Councillor Nobbs.

“We have noticed that when a shop closes for some reason or other, someone else quickly seems to step in and make a go of things.”

One long-standing trader which immediately springs to mind is Wallhead’s – a well-known menswear shop, which has been a feature of the town since 1897. Customers travel more than 200 miles to shop there.

Other individual stores include the shoe repair and keycutting business Pickerings. Jaylaurs offers alterations and haberdashery items, the Kennedi Boutique sells tempting womenswear and there is also a craft shop, Past Times.

“I think our regular Thursday and Saturday markets help to attract local shoppers. The Farmers’ Market, where people can buy everything from speciality breads to ostrich burgers and cheeses, takes place on the last Saturday of the month and also brings in a lot of people,” said Councillor Nobbs.

And there was real pride in 2009, when it was named Best Rural Farmers’ Market in the UK by FARMA.

Brigg has traditionally offered those in search of liquid refreshment and food an amazing choice of pubs, although there aren’t quite as many today as there once were!

In addition, to its smaller shops and businesses, the town has its own Tesco and Lidl supermarkets, both of which are currently looking to expand.

Grandad’s Shed and The Loft Restaurant above it, are a familiar feature in Wrawby Street, where Paul and Beryl Keane are second generation family members.

Paul has developed his flair for selling furniture over the last nine years of working closely with his sister and brother-in-law in the family business. Beryl has been involved in The Loft since it opened n 1995.

Mr Keane said: “We are constantly sourcing new and interesting ranges, whether the furniture is oak, beech, mango, pine or painted for living or dining rooms, kitchens or bedrooms. It is all solid and not flat pack.”

The business also provides a special bespoke service, where its craftsmen design and handmake furniture to customers’ individual requirements .

A restoration service is also available.

The Loft serves everything from breakfasts to lunches, using local Lincolnshire ingredients.

The restaurant is not only going from strength to strength, the Keanes have continued to develop the outside catering side of the business. The Loft was also recently shortlisted for the national beverage award for its coffees – proving that an initial investment in a top Italian coffee machine and staff training has made a difference.

Design and website company Edge Interactive Ltd, which merged with another successful business in Spring 2010, moved into Brigg in 2004 after enjoying significant growth during its first year in business.

Brigg was chosen as its headquarters because it is close to the firm’s expanding customer base and motorway networks and because of the quality of local suppliers.

A spokesman said: “During our seven years in the town we have increased our sales and turnover and a large majority of our customers still come from the local area.

“The current financial climate has meant that the business has had to adapt to tighter deadlines and smaller budgets. We believe that the evolution of the services and products which we now offer has placed us in a stronger position than our competitors.”

Aside from its mix of shopping, this market town is known for its events, such as the Horse Fair, the 800-year-old Brigg Fair and a Fiddle Festival (although the latter two didn’t take place this year). The town also has a Beer Festival.

This year they featured an Adventure Challenge in May, the Brigg Bomber Quadrathlon in July – which involved participants in swimming, kayaking, running and cycling – and the September Brigg Sprint Triathlon. All were based at the Ancholme Leisure Centre.

Now, with the festive season in full swing, there’s something else for residents and visitors to look forward to, Brigg Christmas Fair and the switching on of the town’s lights on 3rd December, starting at 4.45pm.

The Mayor and Mayoress, Councillor Ben Nobbs and Barbara Morris will be on stage for the ceremony, with stars from the Plowright Theatre pantomime Mother Goose.

TEN YEARS OLD
Brigg Garden Centre is not only one of the region’s largest and most popular centres – 2010 sees it celebrating its tenth anniversary.

Owned by the Woodthorpe Hall Group, it has undergone substantial expansion and investment over the years and now boasts more than 20,000 square metres of indoor and outdoor shopping space.

This popular destination, which is staffed by 125 people, also has a 450-seater restaurant and an eighty seat coffee area.

Visitors can buy everything from plants and garden furniture to gifts, clothing and homewares. Each year in the run-up to Christmas, the centre also lays on its famed Christmas Land display, featuring festive ranges sourced from around the world.

Manager Rod Austin said the business is keen to support the local economy where it can.

“As a local company, we like to buy locally wherever possible. This brings added benefits. Products made locally tend to be better value and to have a longer shelf life.

“They are also more environmentally-friendly because they are not travelling long distances with all the fuel costs, pollution and packaging that that entails,” said Mr Austin.

Brigg Garden Centre is also heavily involved in the local community. It provides tools and plants to local schools to encourage the gardeners of tomorrow and it has raised funds for, or made donations to, organisations such as the Lions, Lindsey Lodge Hospice, Macmillan Cancer Care, the Northern Lincolnshire branch of the Campaign to Protect Rural England and the Hedgehog Care Hospital at Authorpe, near Louth.

BYGONE BRIGG
Brigg was granted its Royal Charter by King John, more than 800 years ago.

The town, which sits in the Ancholme Valley, started off as a crossing point for the River Ancholme.

During the 1700s, the Valley was drained, making way for a series of beautiful and unusual bridges across the river. The County Bridge in the town centre dates back to about 1828.

Another, Horkstow Bridge was built in 1844. This small, picturesque suspension bridge was designed by Sir John Rennie.

During the seventeenth century, French brandy and other fancy goods were smuggled down the River Ancholme and into the town.

Brigg has its own song. In 1906, the folk composer Percy Grainger wrote the words to Brigg Fair. Music was added by Frederick Delius.