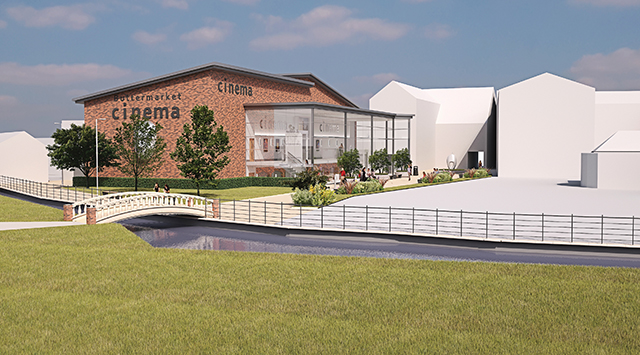 Past and present are being embraced in Sleaford, reports Kate Chapman, with plans for a modern three-screen cinema in the pipeline and a new project which hopes to uncover the secrets of the town’s castle.

Exciting plans to build a £4 million three-screen cinema with a restaurant and food court are currently being moved forward for the town.

North Kesteven District Council has already committed £1.5million to the project and last summer agreed to allocate an additional £2.5million funding to the Heart of Sleaford regeneration scheme.

The project would fulfil a long-held aspiration and also deliver a food court, public open space and a footbridge over the River Slea, connecting Money’s Yard to the Market Place.

Following the council’s investment decision, it was agreed work would proceed on the design concepts, and processing a planning application for submission.

Cllr Richard Wright, leader of North Kesteven District Council, said the new building would be sited on unoccupied land, behind shops on Bristol Arcade and the complex of buildings alongside the Library, where recent work to enhance the historic frontages has been completed.

“Local people continue to tell us that they want a modern multi-screen cinema and this proposal will deliver that as a central part of a major economic boost to Sleaford town centre,” he said.

“Providing a cinema is a bold expression by the district council in support of a modern, multi-use town which meets the needs of a growing and changing town.

“This is much more than a financial investment; it is a game-changer for Sleaford and a massive investment for the whole district. It is the fulfilment of a long-term aspiration for this council and the people of the area and a commitment to the future vibrancy of our market town.”

Across its three screens the new cinema will have a seating capacity of 300.

Ultimately the build contract will be managed by the landowner and a selection process will take place to find a cinema operator. No opening date has been scheduled yet.

Very little is known about Sleaford Castle, so Sleaford Town Council and Sleaford and District Civic Trust are working together to uncover its hidden secrets with a view to encouraging more people to visit the historic site in Castle Causeway.

Civic trust chairman, David Marriage said the first would involve a full site underground radar survey to be followed by a geo-physical survey.

“We really want to know more about the castle and finding out is going to be a community project,” he said, “There is very little of the castle remaining above the ground – there’s just a lot of lumps and bumps with grass all over them, so our intention is to find out what’s under there.

“The results of the surveys may then allow us to take some core samples and go from there.

“At the moment a lot of people in Sleaford don’t even know the town has a castle; we need to have a purpose for doing all of this – we need to get more members of the public down there.

“We’ll be exploring better walking routes to the site, signage and maybe further on there could be a small heritage centre, car parking and the possibility of holding events like jousting.”

Sleaford Castle was once an important estate centre for the Bishop of Lincoln, who was the town’s Lord of the Manor between 1124 and 1139.

Built in the 1120s the castle was essentially a manor house rather than a military stronghold and played host to two English monarchs – King John and Henry VIII.

It was still in a habitable condition as late as 1555 but fell into disrepair during the latter half of the sixteenth century. Eventually the stone was taken away and used to build other parts of the town.

The town’s Bristol Water Fountain, which has not worked since 1905, has also been given a new lease of life thanks to a civic trust project to bring it back to working order.

The fountain was originally unveiled in October 1874 to celebrate the sixth Earl and second Marquess of Bristol by his local tenants and is a reminder of the family’s significant influence in Sleaford.

Last year the civic trust secured a £34,000 Heritage Lottery grant and this, along with money sourced locally, meant the fountain could finally be restored.

Works included digging a new trench to carry both water and electricity to it, while some of the stonework had to be reset and the cast iron fountain head also needed restoring.

The refurbished fountain was officially re-opened at the beginning of October 2019 by the eighth Marquis of Bristol and his wife.

David Marriage, civic trust chairman, said: “This project is very much a community one too, and as part of that we are working to help educate people and particularly the local schoolchildren about the area’s water supply and where it comes from.

“We’re also distributing around 2,500 reusable plastic water bottles, so rather than throwing their single-use ones away people can get their water from the fountain.”

Back in the 1830s water was taken from the River Slea and in many cases was contaminated, resulting in numerous early deaths.

The Bristol Fountain was designed to be built in the Market Square, in front of the former Town Hall and Sessions House, by architects Charles Kirk and Son.

The initial water supply came from a spring in the courtyard of what is now Lloyds Bank. However, the supply always had problems with contamination and in 1875 was vandalised when someone blocked the pipe with a pebble.