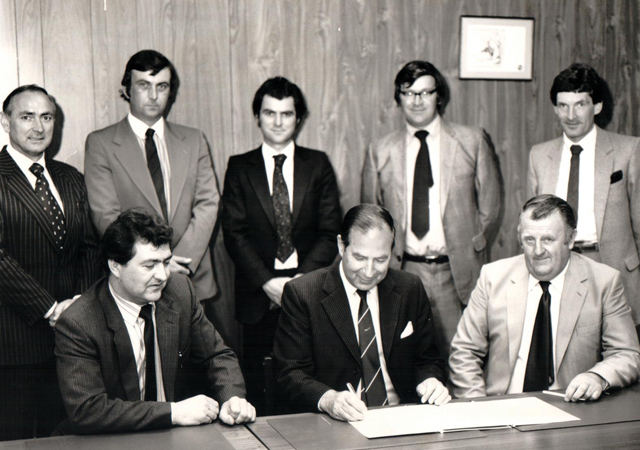 Doubledays keeping in step with tomorrow

The Doubleday Group are celebrating the opening of their new Swineshead showroom and workshops but this is only the latest landmark on their journey as one of John Deere’s leading Dealers of Tomorrow.
BUSINESS FORGED IN A BLACKSMITH’S SHOP
It is forty-four years since John Doubleday took over Fred Campain’s blacksmiths at Holbeach St Johns. John farmed within a few miles of Holbeach and the opportunity to buy the business, which he had relied upon for various repairs and odd jobs, from the retiring smithy was too good an opportunity to miss.

John was thirty-eight at the time and had already been supplementing his farming income trading pre-owned tractors from the UK to the Republic of Ireland but ownership of the blacksmith’s shop opened up the capacity to design and make his own cultivator – the Doubleday Special – ideally specified and suited to the conditions John found on his own farmland.

Word spread about the success of the cultivators and through his connections with tractor dealers, John was able to build a considerable sales network for his machinery. Within three years the smithy site was too small to cope with the volume of business and an application was made to relocate back to the farm at Jekil’s Bank, working from a brand new, purpose built unit. This is where the Group’s Holbeach depot is still based today.

DOUBLEDAYS DEVELOP DEALERSHIPS
The family had always used Ford tractors on the farm and it was a logical decision, when the offer came in 1974, to become a sub-dealer for Ford tractors. The dealership sold a couple of dozen tractors each year but the experience of retailing Fords did not go as smoothly as hoped. In 1976 there were delays in supply which cost the company deals. The uneasy relationship eventually came to the attention of John Deere’s area manager, who called to see John Doubleday in May 1982.

Graham Collishaw, who was at the time a sales rep with the firm and who is now a Doubleday Group director, takes up the story. “Although an offer was on the table from Ford to become a main dealer, in a matter of weeks terms were agreed with John Deere and John signed the papers on 16th June.

“Although John Deere was relatively new in the UK, John W Doubleday Agricultural Engineers were one of the earlier dealers appointed and this decision to partner with a premium brand went down well with not just our customers but with our own farm staff too. The focus on not just excellent build but also driver comfort met with great approval.”

MOVING ON
The change also had a huge effect on turnover and over seventy tractors and thirteen combines were sold in 1984, all within a ten-mile radius of their base.

As the dealership grew so the cultivator business declined, as new machines from competitors entered the market. Even today, though, you can find a few Doubleday levelling harrows still being used for seedbed preparation, especially by sugar beet growers.

The next opportunity for growth came in 1988 when Doubleday took over neighbouring dealers Bourne Tractors, who could not continue to hold both John Deere and New Holland franchises. The new territory and outlet at Dyke, near Bourne was a perfect fit with Doubleday’s operation and by the mid 1990s Bourne Tractors had quadrupled its turnover and was a member of the John Deere £1 million club putting it into the top 35% of dealerships.

Another substantial territory was added in 1999 with the takeover of Evergreen Tractors at Wiggenhall St Germans, near King’s Lynn. Doubleday’s territory now covered sixty miles, east to west and twenty miles north to south. Success has come on the back of a consistently good product range from John Deere but also with a strong offer of other machinery franchises which complement their core business.

THE RIGHT MACHINERY FOR THE JOB
Being based in a strong arable area, Doubledays offer cultivation equipment from Väderstad, Gregoire Besson, Maschio and general farm machinery by KRM. Local firms include Cousins of Emneth and Boston based Larrington Trailers. Hedge and verge cutters and toppers from Spearhead complete the range.

Väderstad has been a particularly successful partnership, with Doubledays now covering the whole of Lincolnshire for the Swedish firm. A dedicated parts outlet at Alford was opened in 2010 to support demand from clients in the north-east of the county.

Michael Alsop, managing director of Väderstad Ltd said: “Doubleday’s new depot is a good representation of their commitment to their customer base and their suppliers. As a family owned company too, Väderstad are able to relate and work well with Doubleday to the benefit of both businesses.”

A LOCAL AND FAMILY BUSINESS
Now under the management of the third generation of the family, the same values and ethos are maintained at the Doubleday Group, of knowing your customers and their business individually and backing this up with excellent service and value.

EXPANSION NORTHWARDS AND NEW DEPOT
Doubledays and their loyal and professional workforce have enthusiastically taken up the challenge of John Deere’s Dealer of Tomorrow initiative to expand their territory northwards. The new depot at Swineshead has now opened and is part of the plans not just for today but for the next generation!

“We have over fifty staff now,” explained Zoe, “and we could not achieve what we do without the support and dedicated commitment of them all. All of the depots are now one company under the Doubleday Group and as resources are moved to Swineshead we shall begin a phased closure of the branch at Bourne.

“It is all about creating a business which is best suited to the agricultural industry of the twenty-first century, with the growth in telematics allowing dealers to monitor the machines we sell to anticipate issues before they arise and carry out repairs before they become expensive problems.”

PURPOSE-BUILT
The new depot has been designed and built by the Lincoln based Lindum Group in a prime location just off the A17 at Swineshead. The light and airy showroom has excellent display areas for ranges of John Deere ride-on and conventional lawnmowers, as well as floor and wall display units. The parts desk and service reception are accessed through the showroom with purpose-built offices and workshops at the rear.

In the showroom you will find essential accessories as well as a range of country wear by Musto, and boots by Le Chameau and Muckboot. One wall is dedicated to John Deere’s fabulous range of branded toys, babies and children’s clothing, peddle tractors, trailers and go-karts – a dream destination for any budding farmer or countryside enthusiast when writing their birthday or Christmas list!

Zoe summed up the family’s satisfaction at finally seeing the Swineshead depot open. “We are really looking forward to welcoming and serving our customers from this new magnificent building. We are a business which has succeeded under the stewardship of generations of the same family and we know this is true of our customer’s businesses too. We want them to know that we are here to serve them today with the same dedication but with facilities and skills which are fit for today’s dynamic agricultural industry.”

CELEBRATION OPEN DAYS
You are invited to Doubleday’s new showrooms at Swineshead on Friday and Saturday May 30th and 31st to enjoy hospitality and a prize draw during their Celebration Weekend.

Open from 10am each day and until 8pm on Friday and 5pm on Saturday, there will be a chance to see displays of superb John Deere machinery and agricultural equipment as well as ride-on and conventional mowers.

Alongside the new Parts and Service counter there are displays of Musto clothing, boots by Le Chameau and Muckboot as well as John Deere’s famous toys, clothing, junior overalls and children’s peddle tractors, trailers and go-karts.

Children visiting that weekend will be able to enjoy time in a dedicated Activity Area while parents get chance to view the new showrooms.