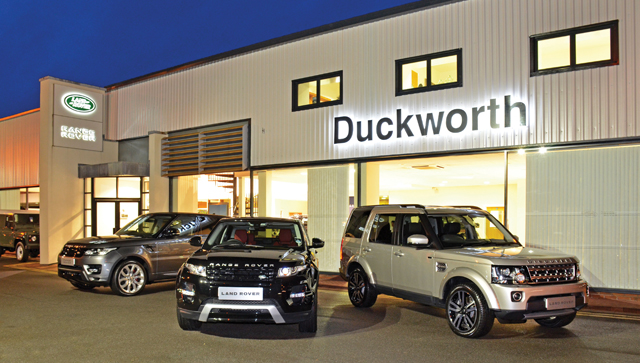 Many businesses have their roots in one person’s devotion to their craft but in the case of the Duckworth family, a passion for precision engineering, machinery and motor cars has run through their veins for three generations.
Chairman, Martin Duckworth cannot remember a time when his late father, James Duckworth, was not inventing, making or operating machinery.

He said: “My father was an engineer by training; a precision gauge maker. Born and raised in Sheffield, he made gauges for the manufacture of gun barrels during the Second World War. He could turn his hand to almost anything – cabinet making, electronics and engineering – and after the war, in the 1950s, he moved to Lincoln.

He had designed, amongst many other things, a thrust border. He recycled the hydraulic systems from obsolete Lancaster Bombers and these machines were used to drill water courses beneath roads. The machines were hired out and also used to dig the channels for radar systems being installed at airfields across the county. He worked on the airfields at Waddington, Scampton and many others in the early 1960s.”

James Duckworth had moved his business to a larger yard in Ingham in the late Fifties, where Martin could explore his own fascination with engineering and particularly motor cars. After school Martin helped out at Arthur Kirk’s garage on Long Leys Road, sweeping up, parking cars and making the tea; a great apprenticeship to servicing from age thirteen.

By the time he had finished his O levels, Martin wanted his own garage and in 1962 James Duckworth and Son was established. Father and son worked together, with Martin running the business by the time he was eighteen.

“I dug the inspection pit and every time a new model came in I bought and read the service manual to learn about each make,” he said. “My late mother, Gwen, did the books. We were very busy with an AA and RAC emergency breakdown service. I bought one of the first krypton tuners in the county which bought in a lot of RAF personnel, wanting their sports and high performance cars tuned. I took on our longest serving employee, Martin Steel, as an apprentice at this time. He was sixteen then and is still with us now at Boston.”

Being based at Ingham, James Duckworth and Son also served the farming community, who were always looking for Land Rovers, their everyday workhorse vehicles. There was a two-year wait for a new one, so Martin began to buy ex-military models and rebuild them. His order book was soon full and the garage became well known as a Land Rover specialist. Fulfilling warranty work on behalf of Land Rover followed in the late 1970s and within two years a dealership was offered on the agreement that a different premises, further away from Lincoln, was found. The move to Market Rasen and the site that Duckworth’s still occupies in the town on Willingham Road followed in 1980.

The initial plan was to rent the showroom and the owner carry on operating the petrol side of the business but a deal was made whereby the newly formed company, Martin Duckworth Limited, would buy the site and rent back the pumps.

“I had all the passion and ambition to expand the business,” remembers Martin, “but this was a huge step for me which was supported by the bank and a grant from Cosira. We were up and running in time for our first stand at the Lincolnshire Show in June.”

Martin recalls that the model range was still very limited: “It was very much a working brand with a two-door Range Rover and the old 3 series Land Rover. There were some reliability issues but the off-road performance was still the best bar none. But throughout the Eighties, the brand was building not only the model range but also as a lifestyle choice in the country and in town.”

Martin knew that the brand could still do better and welcomed the invitation to represent retail dealers on the Land Rover Council. It gave him a unique insight into the product and brand development.

“It was a very interesting time to be part of the Council and the launch of the Land Rover Discovery in 1989, a more affordable model with a diesel engine option, convinced me the brand was heading in the right direction,” said Martin.

In 1990 the decision was made to level the Market Rasen site and put in its place a purpose-built showroom, offices and workshops which were more than capable of matching the manufacturer’s and customers’ expectations of Land Rover service and experience. The timing could not have been better to meet the huge demand for the new models.

Martin added: “I am delighted to say that my son, Ben Duckworth, now managing director of the company, has been invited to join what is now called the Jaguar/Land Rover Retailer Board previously known as the Land Rover Dealer Cabinet.”

Martin and his wife, Sally, have three children – Ben, Guy and Sophie (marketing manager at Duckworth Land Rover and Isuzu) – and the family fascination for engineering and motor cars continues.

Ben trained as an automotive engineer, winning an apprenticeship with Land Rover and worked for them for many years before joining the family business in 2002.

This year Martin Duckworth Limited celebrates thirty-five years as a full Land Rover franchise at the Market Rasen site. It is a testament to the team’s high rate of customer satisfaction and their responsiveness to changes in brand ownership and the market place that the company remains one of the few privately owned Land Rover retailers in the UK.

Martin said: “As challenging as it has been sometimes, we have always invested heavily in the business and this continues today. The Land Rover marque has changed ownership several times throughout these decades but Ford invested millions into the product range from 2000 onwards, as have Tata Motors since 2008. It makes me very proud that we are part of the most sought after brand in the motor industry.”

Martin, Ben and Sophie acknowledge that their success would not be possible without the skilled and dedicated team of people they employ. Many of their core staff have spent all their working lives with Duckworth’s and their careers have progressed as the company has expanded. From a two-man operation turning over a few thousand pounds in the Seventies, Duckworth’s now employ over 100 staff with a turnover which exceeds £65m.

Duckworth Land Rover Boston was bought in 2008, with redevelopment of their site on London Road to match the corporate guidelines. Ben is supported by Gordon Joyce, head of business at Market Rasen and Andrew Shaw, Head of Business at Boston. The company still believes in following the requirements and demand of customers as the key to their success.

In the boardroom is a display of the many awards which the company has won. Market Rasen has received Land Rover Dealer of the Year several times, while in 2014 Boston won After Sales Retailer of the Year and came second for overall Retailer of the Year out of over 130 Land Rover franchises across the UK. Martin is proud of the opportunities available in training and apprenticeships which keep up staff motivation and excellent service for customers. He has also never failed to spot a good marketing opportunity either.

He said: “We were asked to supply a vehicle to be used in the opening scenes of a film titled The Hunt for Red October. I was more than happy to do that and thought I would send it with one of our dealer stickers in the rear view window – expecting that it would either be removed or not appear. When the film came out, there it was, clear as day, which still thrills me if it is reshown. That is the sort of publicity money cannot buy.”

With Martin in the chair and the third generation of the Duckworth family at the helm, the future is bright. Both branches are set for expansion with additional sites being developed, while the company is also the largest Land Rover Parts retailer in the UK. The Market Rasen site continues to be the flagship, meeting the demand for new vehicles, parts, servicing and an outstanding showroom.

As usual Duckworth’s will be welcoming customers old and new to their stand at the Lincolnshire Show on 24th and 25th June to help celebrate this thirty-five-year milestone.