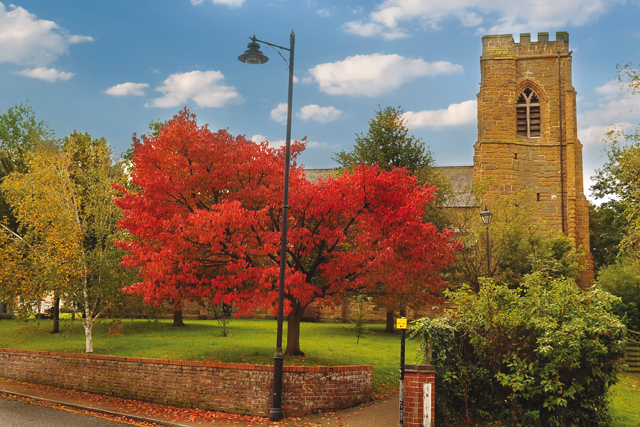 There’s a fresh buzz about a Lincolnshire market town where businesses are ‘cracking on’ with a slick plan to revive its fortunes.
Fired up by Market Rasen’s success in being named a Portas Pilot town earlier this year – which came with a funding boost of £98,599 – traders are pulling together and taking action to make this a much more vibrant destination.

As members of the community interest company Market Rasen Business Improvement Group (MR BIG), they are pushing the town into the spotlight and driving footfall by staging a string of attractive markets and selling promotional goods.

But that’s not all. There are plans to encourage budding entrepreneurs to grow their businesses in the town, to bring empty shops back into use, to introduce retail apprentices and more.

As we went to press, Lincolnshire Life also learned that a new part-time town manager, whose name was still under wraps, had also been appointed.

It seems that Market Rasen has a new spring in its step, to the delight of businesses – many of which have been spruced up with a lick of paint reflecting a new sense of pride in the town – and organisations and individuals which are supporting MR BIG.

MR BIG was formed in January on the back of the Neighbourhood Planning Initiative. About forty businesses attended a meeting. Owners and managers shared their hopes for the town and discussed whether Market Rasen should bid for Portas Pilot status.

An application was ultimately submitted, complete with a Town Transformation Plan and a video.

In mid-May, while awaiting the outcome of its bid, MR BIG’s members threw their energies into organising a thirty-stall Pop Up Market, which traded between 3pm and 7pm and which proved a great success.

At the same time, Market Rasen Primary School children created a mock aquarium in the Lincolnshire Co-operative owned building which formerly housed The Square Bar. The youngsters drew bubble-blowing fishes and people were urged to write their wishes for Market Rasen in the bubbles.

A few days later, Market Rasen celebrated the fantastic news that it was just one of twelve destinations countrywide which had won Portas Pilot funding, out of more than 370 which had bid for a share of a £1.2 million pot of cash!

MR BIG director, Richard Hallsworth said: “West Lindsey District Council holds the Portas Pilot money, which we can draw down quarterly over a period of about eighteen months, in a ring-fenced pot.

“MR BIG was set up as a community interest company, which allows us to be independent and to trade and become sustainable.”

In its application to become a Portas Pilot town, MR BIG said its aspirations were to:
• Tidy up the town
• Put the Market back into Market Rasen
• Have a sustainable shopping strategy (which includes supporting start-ups)
• Pull in people by using innovative marketing ideas

Since its successful Pop Up Market, MR BIG has continued to build on its markets theme, and it is a move that is certainly getting the town noticed.

“We started by agreeing to stage six markets. On 7th July we had about thirty-five stalls and on 1st September that rose to around forty-five.

“Our ‘Food Glorious Food’ market on 6th October, where we were helped by Tastes of Lincolnshire and which featured demonstations by celebrity food writer Dominic Franks under the market’s auction shed, featured sixty stalls – including thirty craft stalls in the Festival Hall,” said Mr Hallsworth.

Another Hallowe’en-style market is planned for 3rd November and on Friday, 7th December MR BIG will be supporting Market Rasen Round Table, the Town Council and Mayor’s Charity by having food stalls at the Christmas Carols and Traditional Fayre event, ahead of the town’s usual monthly market the next day. More MR BIG markets are on the cards for 2013.

MR BIG which is open to businesses based within an eight miles radius of the town (who pay a £2 one-off joining fee) now has seventy members.

Other projects currently underway include a revamp of the old Halifax building near the Market Place, thanks to sponsorship from the Lindum Group.

“Within the next few weeks we aim to have created a ‘shop within a shop’ downstairs in that building for fledgling retailers and a place where market traders might move into, while Lindum operates the upper floor as managed workspace,” said Mr Hallsworth.

Market Rasen has lost its farm shop, so in November MR BIG plans to launch its own venture Greens of Lincolnshire in a former fruit and veg shop in the town’s Queen Street. It will open six days a week, sell local produce and offer a delivery box service.

“We also hope to take a joined-up approached whereby a customer can call the shop and ask staff to get them something from a nearby outlet to be added to their delivery,” said Mr Hallsworth.

“We also want to have a corporate scheme whereby we deliver several items to one business address. This project is designed to be sustainable, after we have used the Portas funding,” he added.

RASEN HUB
Information, support and advice, complete with a smile, continues to be offered at the Rasen Hub.

This multi-purpose centre in Union Street is the place to track down a range of activities and services, or get signposted to other people who can help.

People can make appointments to chat to Citizens’ Advice Bureau staff on Tuesdays between 2pm and 4pm.

The Hub’s Craft Club meet on Wednesday afternoons between 2pm and 4pm. Sessions cost just £2 and offer people an opportunity to work on various projects, enjoy demonstrations or simply chat.

On Thursdays, solicitor Wilkin Chapman Grange provides a visiting legal service for clients – with pre-booked appointments between 2pm and 5pm.

Rasen Hub Family History Group is also based at the Centre. Centre spokesperson, Stella Tuplin added the Hub has also offered to help MR BIG to find volunteers for its ongoing efforts to breathe extra vitality into the town.

TRADERS BACK CHANGES
Businesses in Market Rasen agree there is a renewed sense of optimism in the town since it received Portas Pilot status and funding.

Bridget Pitman-Brand, who owns the Market Rasen Pet Centre, said traders are buoyed by the work being done by MR BIG.

“I have witnessed many changes in Market Rasen over the past twelve years and I think this is the best thing to happen here in that time. You can feel the effects of what is being done.

“MR BIG’s help with the markets means people are visiting and looking around and, as a shopkeeper, it has given us a burst of energy. Also, MR BIG is not a short term thing, it is working longer term for Market Rasen,” said Mrs Pitman-Brand.

Ken and Sue Greenwood are at the helm of Rasen Hardware, in partnership with Roger Thwaites.

Mr Greenwood said: “I have been here for twenty years, but the shop has been around for forty.”

The diverse business which attracts shoppers from the surrounding area, including towns such as Louth and Horncastle, sells traditional hardware products and is also a Calor Gas dealer, cuts keys, does engraving and shoe repairs.

“I am MR BIG’s trade liaison member so I speak to other retailers and gather their thoughts, ideas and concerns and take these back to the Board,” said Mr Greenwood.

“Overall MR BIG has been welcomed and it has got going quickly. It is great to have positive and driven people around you. It is all about getting people to visit Market Rasen and increasing footfall and spending.”

Beauty therapist Kate Quinn, from Grasby – who formerly worked from home – and her sister-in-law Tracey Quinn, who has been hairdressing for twenty years, opened Quintessential Beauty in Queen Street in May.

This was before MR BIG started its Markets projects which has brought extra business into the town and she is delighted with the way trade is going.

“Market Rasen is pretty and we are situated on a main route through to everywhere so we are attracting passing trade,” said Kate.

On Tuesdays, holistic massage therapist, Fiona Purmell offers a clinic at the salon.

Quintessential Beauty is among businesses which have taken advantage of a trial of the smartphone application TikTap, which was arranged by MR BIG and which allows clients to use their mobile phones to check in for appointments.

The contactless mobile coupon and voucher redemption system allows businesses to offer everyday deals and vouchers to shoppers. Customers select these, using an app, and redeem them using their mobiles.