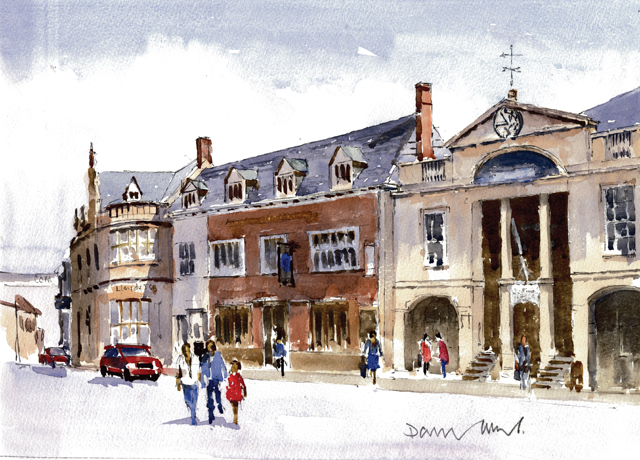 Drive through this wonderful old market town a little too quickly and you will miss some interesting shops and attractions.
Stop and wander at leisure and you are likely to be pleasantly surprised to discover that there is rather more on offer than you imagined and that this is also a centre of employment, which is home to some well-known companies.

Over the past year, Bourne has naturally experienced a taste of the ups-and-downs which are common to most of today’s retail and commercial centres.

But Town Clerk, Nelly Jacobs, said there is good news to report. Jobs have been created, some businesses have expanded and a proposed £2.35 million development is one step nearer reality.

But to really make the most of Bourne, you need to park up (the town offers shoppers the bonus of limited free parking!) and explore its hidden alleyways as well as its main thoroughfares – North, South and West Streets and Abbey Road.

Mrs Jacobs said: “Bourne has a growing population and is now home to about 15,000 people.

“Families are attracted by the cheap housing and good schools, most of which have had good Ofsted reports.

“I think that Bourne is doing as well as most other centres but, of course, there are some businesses which we still need, or could do with more of, such as clothing stores, particularly menswear, sportwear and giftware outlets. There are gaps to be filled.”

However, development-wise Mrs Jacobs believes Bourne is on the up. South Kesteven District Council purchased land at the far end of Wherry’s Lane some years ago and is now looking to make progress with plans to regenerate the area.

Although this will be on a smaller scale than at first envisaged, it will feature some commercial units, which Mrs Jacobs said are already attracting interest.

Investment by Anglia Co-op, has breathed new life into the town’s former Budgens store at the foot of The Burghley Centre, following the Co-op’s relocation from Manning Road, where permission has been granted for about 120 houses.

“That business has brought new life into the shopping centre, encouraging more footfall in an area which is home to various businesses, including fashion and charity outlets and a café,” said Mrs Jacobs.

Tesco created about 180 jobs when it opened its new supermarket in South Road in February and Sainsbury’s in Exeter Street has also expanded.

Bourne is an important provider of shops and services for the town itself and the surrounding villages.

This is particularly true when you stop and realise that shopping locally makes real sense at a time of rising food and fuel prices.

Bourne is known for its family-run and niche businesses – think hardware store Harrison & Dunn, The Crafty Patch, which stocks everything from knitting wools to sewing notions and cardmaking supplies, and Walker’s bookshop.

And no visitor should miss spending time in Angel Precinct and Crown Walk.

It’s your choice how you approach these ‘alleys’ because one leads into the other.

Angel Precinct, which runs alongside the Angel Hotel is off North Street and the entrance to Crown Walk is off West Street.

This delightful area boasts some superb businesses, run by very enthusiastic owners, who are determined to offer individual products and services.

If you’re looking to find anything from lighting to baby clothes, an optician, a coffee shop, women’s fashions, estate agency expertise, blooming fabulous flowers or a bagful of old-fashioned sweets, this is the place to visit.

Your Little Angels, in Crown Walk, is a first venture for Emma Loveridge, who is selling new and nearly-new clothes and accessories for children from birth to pre-school age. She has been trading for more than seven months.

“I have been wanting to have a shop for a few years, but I wanted to be based in Bourne and finding the right location was key for me,” said Miss Loveridge.

“This is a nice little shopping area, everyone knows everyone else, and I benefit from passing trade.”

Carol Schofield has run the Bean Bag Coffee Shop (also in Crown Walk) for the past seven years and she is also a partner in nearby Sweet Sensations, which she runs with a former coffee shop employee, Alison Atkins.

“The coffee shop is independent and we make and bake everything ourselves.

Nothing is bought in and I think people seek out this sort of thing. National businesses are not so easily able to vary what they sell.

“But I think providing a quality service is vital. Things like the twenty per cent hike in the VAT rate don’t help. So small businesses have to try and offer new things to tempt people and to give added value.”

Mrs Schofield offers an outside catering service in addition to looking after the coffee shop.

Nearby Sweet Sensations has picked-up the celebration theme, and sells everything from party bags to wedding favours as well as a mindblowing choice of old-fashioned sweets, displayed on shelves groaning under the weight of jars filled with irresistible treats.

Another independent business is Crown Jewellers which started out in Crown Walk, but which has successfully expanded to move into premises around the corner’ in North Street.

Owner Cathy Powell and her team stock a variety of lines, including special occasion jewellery and watches.

“Bourne Sports closed last October, so I came around to look at the premises before the letting sign even went up,” she said.

“This shop is in a good location, right next to the pedestrian crossing, and it is much bigger than my previous premises, which is great.

“My son Matthew is an apprentice goldsmith so, in the longer term it will prvide him with a potential opportunity, not only for making jewellery but doing in-house repairs.”

Bourne is also home to food industry and hospitality industry businesses, such as Bakkavor, Bourne Textile Services – which provides linen services to hotels and restaurant – and Lincolnshire Herbs.

The town is also famous for its connections with the world of motorsport and is still home to businesses such as Pilbeam Racing Designs and Hall & Hall.

And if you enjoy browsing market stalls, the town’s Corn Exchange car park is the place to find everything from fresh meat to household essentials every Thursday. There is also a smaller Saturday market.

“The Chamber currently has thirty-five members, the latest being Utility Warehouse which looks to reduce utility bills. But further interest is being shown by other potential members,” said Mr Hicks.

Apart from its local advertising activities, the Chamber is working hard to promote Bourne’s shops and services and members are looking forward to its Trade Fair, which will take place on 16th September at the town’s Corn Exchange from 9.30am to 3.30pm.

“This previously attracted about 500 people. This year, with the help of South Kesteven District Council, we will hopefully surpass that number,” said Mr Hicks.

Developments-wise, Mr Hicks said Tesco is proving to be a valuable addition to Bourne’s community.

Together with Sainsbury’s and the Co-operative food store, these businesses are attracting shoppers to other stores and services within the ‘triangle’ of the town,” he said.

MOTORING HERITAGE
Raymond Mays and the groundbreaking English Racing Automobiles (ERA) and British Racing Motorsport (BRM) are indelibly associated with Bourne – and you will find a “memorial” to this motoring giant in the town’s South Street.

Today it is BRM’s former chief designer, Mike Pilbeam, and Hall & Hall, both based in the town’s Graham Hill Way, who are keeping this proud link with the world of motorsport alive.

ERA dates back to 1949 and BRM swiftly followed, with Mays unveiling the first car at Folkingham Airfield. BRM moved into the fast lane and the team celebrated Grand Prix glory many times.

In 1965 the business employed 100 people in Bourne. Mays died in 1980 and Rubery Owen sold the BRM collection of vehicles.

Mr Pilbeam, whose career includes working with Lotus and Surtees, set up his own business in 1975.

Pilbeam uses advanced technologies and draws on its wealth of experience in the ongoing drive to meet demand for high performance cars with excellent aerodynamics.

Hall & Hall is based nearby, in Pilbeam’s former premises. The business was started by father-and-son, Rick and Robert Hall, more than thirty years ago.

The company concentrates on the preparation and manufacture of parts for historic F1 and sports cars, but also produces single-seat, high-end cars.

BOURNE DEVELOPMENT
South Kesteven District Council is planning to invest £2.35 million on a scheme to regenerate a key part of Bourne.

Work is due to start this autumn on a town centre project which aims to encourage growth but also protect the town’s architectural heritage.

The current scheme, which is smaller than the one originally envisaged, will be based around Wherry’s Lane.

This project involves the conversion of Wherry’s Mill to create new homes and also business units.

The rest of the site will be fashioned into public open space and prepared for future upgrading in the area.

The idea is to link the current lanes in this part of town and, by working with partners and landowners, produce new interesting areas.

A Council spokesman said: “We want to ensure that good quality heritage buildings are preserved whilst, at the same time, create passageways to explore, good quality shop fronts and linkages to the main streets.”

South Kesteven District Council hopes to appoint a contractor for the work by the end of August.