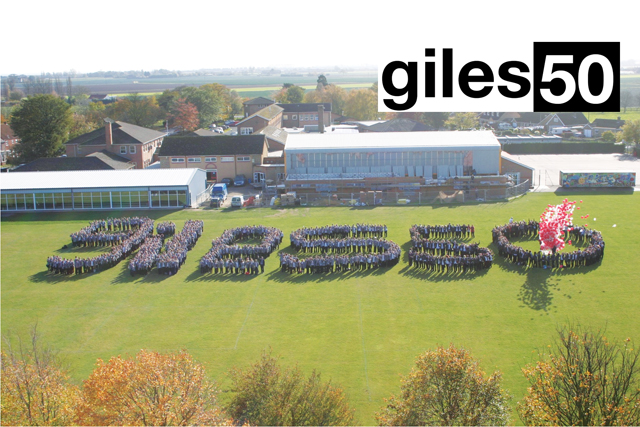 This will be an extra special summer term for Giles Academy, Old Leake as the school celebrates its fiftieth anniversary.
When the first pupils arrived at the newly built school in January 1962, they came from several, smaller local sites to find a staff of eighteen ready to teach the 315 roll-call. It was reported that, for the first time, children in North Holland would have the advantages of specialist teaching, equipment and facilities at the £125,000 complex.

Officially opened as Giles Secondary Modern School on 16th July 1962, by The Earl of Ancaster, TD, the then Lord Lieutenant of Lincolnshire, the head count increased as the school became more popular and today just over 1000 pupils are enrolled at Giles Academy, with a teaching staff of seventy.

During the past five decades the school has only had three headteachers, which is testament to the longevity of their commitment and the integral part the school plays as a cornerstone of the local community. The most recent Ofsted report for the school rated it as Outstanding.

ACCESSIBLE
The school site is open and accessible to the public who have become involved in many of the events held there. One of the most successful was the Wellython, held in 2009, which attracted 1,366 people walking two miles in wellies to break the official world record.

A remarkable partnership has been formed with the local church, St Mary’s, Old Leake. The grounds of this beautiful building adjoin the school site and it always forms the backdrop for school photographs. It has become an annual tradition for Giles Academy pupils take part in a whole school Remembrance Service, with members from the local branch of the British Legion at the War Memorial in the churchyard.

ACADEMY
The school became a Specialist Arts School in 2005 and the Performing Arts still have a great take up among pupils. There is a school production every year (‘West Side Story’ for 2012) and a pantomime every Christmas, for which all the work, costume, lighting, music and staging are completed in-house.

The school converted to Academy status in September 2010 which has given greater independence and the ability to bid for funding on its own behalf. Deputy Head, Ian Widdows has been responsible for some of these submissions.

He said: “By becoming an Academy we have been able to propose and win bids to build more teaching rooms and a swimming pool. Three other local primary schools use the pool as well so we have managed to secure this wonderful resource and open it up to the local school community too.”

The use of the pool is just one of the sports facilities that is included as part of the Healthy Schools programme, to which Giles Academy subscribes. The increased levels of physical activity are matched by the commitment of the eleven on-site catering staff to serve local produce which is freshly prepared in the school’s kitchens. The school day begins at 8am with a free Breakfast Club which is regularly attended by 100 children, including those who come from neighbouring Old Leake Primary School. Roast dinner on Tuesdays is the most popular lunchtime menu choice and recently the school was awarded a 5-star food hygiene rating by Lincolnshire County Council.

As Deputy Head, Sue Barnicoat said: “There is a need for us to promote healthy eating and lifestyles to combat a growing trend of obesity in the district and the Healthy Schools programme helps us to get the message across to pupils and into homes too”.

CELEBRATIONS
This year there have been several events to celebrate the golden anniversary. For pupils there was a hobbies and activities afternoon in January where they tried pastimes popular in the early 1960s. With access to computers banned, it included Airfix model making, beekeeping and Sixties-style hair and beauty on the timetable. For ex-pupils, staff and parents there was an open invitation in February to ‘Afternoon Tea, Tour and Entertainment’.

On Monday, 16th July, exactly fifty years on from the original dedication and opening of the school, Mr Tony Worth, the current Lord Lieutenant of Lincolnshire, will attend to officially open the eleven new classrooms. This will be followed by a musical event and fete for the present pupils, past pupils and the local community. Further details can be found on the school’s website.

The school has always believed in helping children to achieve the best that they can possibly be and this has produced not only excellent results in league tables but also pupils who have gone on to receive national recognition in their field.

TO THE NEXT FIFTY
One of the impacts expected of the school in 1962 was that it would drive a great improvement in the pattern of life in Old Leake for children, their parents and the wider community. This is still the underlying motivation and ethos of the school today as it considers the years ahead. Headmaster, Chris Walls sums it up best when he says: “We have created an environment to inspire our teachers and students, in which both Grammar and Vocational curriculums are available. Please make an appointment with my secretary, Diane Law, if you would like me to give you and your child a tour of our school in action.”

FIVE DECADES OF LEADERSHIP
There have only been three headmasters of the school during the last five decades. Mr W S Hollins was in charge from 1962 to 1978. He was replaced by Mr D Vincent who retired in 1992. Mr Chris Walls took his place and has remained until present day.

The school has a history of long service among its staff and finance officer, Mavis Warrant, has spent twenty-eight years of her working life at the school. Mavis (nee Sharp) has another aspect to her long association in that she, aged fourteen, was among the first intake of pupils to
the school.

An image in the gallery shows Mavis in her uniform, a picture taken by her family, as so many of us do, to record her first day at a new school.

NEW UNIFORM JUST THE BUSINESS
As part of the approaching fiftieth anniversary it was decided, during discussions with pupils, that the school should select a new uniform. The previous one had been in place since the school opened and it was felt that the consultation should go out to all year groups.

Some of the final choices reflect the less formal aspects of a twenty-first-century lifestyle, such as the girls not wanting to wear ties anymore (but they did want to have a skirt rather than wearing trousers all year round). The sixth form have abandoned their sweatshirts and chosen a slightly different variation on the uniform to reflect their seniority and a more businesslike approach to their studies. Boys, adopting current fashion trends, have discarded their sweatshirts too and have added a cardigan to their options. One thing pupils have in common is the bright red lining to all the jackets which is a vivid and smart contrast to the light grey base colour. Deputy Head, Sue Barnicoat explained that the teaching body and management could not be more delighted with the choice: “The pupils have taken great pride in making this decision and they have all adopted the new uniform. Even the headteacher and deputies have their own uniforms, which they wear in November on Takeover Day. It is smart, attractive and versatile reflecting the ethos that we are all working as a team and we are raising the expectations of each pupil’s personal appearance.”

MAKING A SPLASH
Melanie Marshall, a former pupil, is an ex-Olympic swimmer and she came back to Giles Academy in November to officially open the new swimming pool.

International connections are being achieved through the Comenius Project, which links schools across Europe as part of an eco art project. The murals and artwork around the new pool were created by the school’s artist in residence, Warwick Eade, who also does outreach work within the local community. Some of this work by both pupils and the public is then shown at the Giles Gallery in Strait Bargate, Boston.