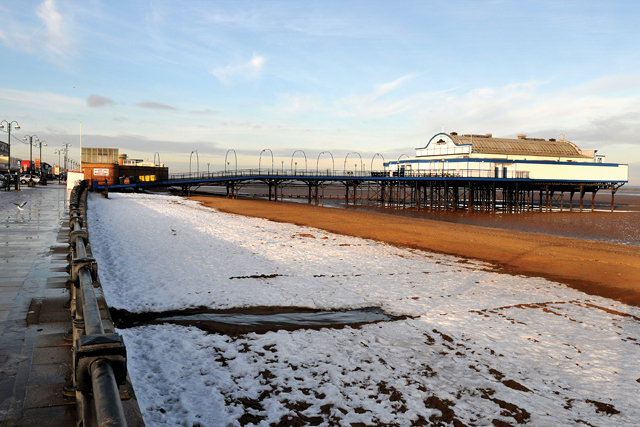 For many people, the first thing that springs to mind when you mention Grimsby, is the town’s world famous port facilities and its remarkable fishing heritage… but this is an area which is rapidly diversifying.
The port facilities have helped to attract hundreds of food-related businesses, along with warehousing, logistics and other industries. And efforts are being made to boost Grimsby’s shopping and leisure facilities and bring in new digital-age enterprises.

But even more excitingly, Grimsby is poised to benefit from the big bucks waiting to be made from the emerging chemical and rewewable energy sectors – think wind farms.

As 2011 begins, business leaders say these mushrooming industries could open the door to brilliant business deals for this part of the world.

“As 2010 draws to a close, the business community in North East Lincolnshire is looking forward to 2011 as a year of opportunity and potential growth,” said Mr Brett.

“In recent weeks, certain sectors of the economy – in particular chemicals and renewable energy – have experienced an unprecedented level of enquiry for new business.

“However, some of the more traditional sectors remain cautious about the future, given the cuts in public expenditure that are about to commence.”

Mr Brett said traders are particularly worried about rising business costs, such as the hike in National Insurance in April. There are also fears that the rise in VAT, which will hit in January, will stifle a recent pick-up in the amount of money that people have been spending.

“The principal opportunities for the area remain in the traditional South Humber Bank industries, of chemicals, energy and ports and logistics. The Government’s desire to increase electricity generation from renewable sources means that there will be a large scale increase in offshore wind generation,” said Mr Brett.

“Major wind farms are planned off the Lincolnshire Coast, which will need to be both constructed and serviced. Two opportunities for construction are being proposed by Associated British Ports in Hull and Able UK at Killingholme.

“The restrictions of the port at Grimsby mean that it cannot compete in this sector, however, it is best placed for future operations and maintenance. Already three companies have established bases in Grimsby Fish Docks or Grimsby East, as it is being marketed by the Grimsby Renewables Partnership.”

The Partnership recently exhibited at Renewables UK in Glasglow and Mr Brett attended in his role of ABP Grimsby and Immingham deputy ports manager.

“It is extremely encouraging for Grimsby that it is at the forefront of efforts on the East Coast, to establish operations and maintenance bases for the offshore wind sector,” he added.

Mr Brett said the Partnership received many enquiries for information about services which are available at the Port.

“We believe this will offer a major stimulus to the economy in North East Lincolnshire for a range of sectors, including engineering, education and training, as well as the marine industries.”

Of course, all this activity has to be good news for Greater Grimsby – the brand developed to help catch the attention of potential UK and international investors.

A North East Lincolnshire Council spokesperson said this identity is being used to raise the profile and people’s perceptions of the area by highlighting the town’s superb location, facilities and industry clusters.

It is also hoped that it will encourage the area’s existing businesses and residents to have a sense of pride in the region.

A year ago, the Greater Grimsby Renaissance Partnership told Lincolnshire Life how a twenty-five-year Masterplan aimed to breathe extra vitality into various parts of the town, from Alexandra Dock West to Cartergate and Riverhead Square.

“In terms of projects, such as the development and delivery options for leisure and library facilities and the development of Alexandra Dock West, a design competition has been approved to explore the potential for developing a fully-integrated leisure centre, central library, customer service point and office complex.”

Despite the dark shadow of Government’s cuts, which are casting uncertainty over the future of the retail industry, Freshney Place Shopping Centre is looking towards a bright and prosperous future.

This attractive complex is home to more than 100 shops, from department store giants House of Fraser and BHS to High Street names, including Jane Norman and HMV, and small, independent retailers such as Ceasefire and In the Pink.

Centre director Amanda Austin said the range of retail occupants has been boosted by recent new arrivals. Caffechino offers visitors a new place to meet friends and relax over a coffee, while Hawkins Bazaar gives shoppers the chance to buy unusual and quirky gifts.

She said the return of Shopmobility also showcases the centre’s emphasis on accessibility and the desire to provide the very best of customer service to everyone.

“The occupancy of Freshney Place is very positive. At a time when many towns and shopping centres have been losing retailers, we have managed to increase our occupancy. We have attracted several new businesses this year and hope to build on these acquisitions through 2011.”

The centre team is proud that, in addition to attracting Grimsby shoppers, it regularly pulls in visitors from a twenty-five miles radius of the mall – allowing it to compete with rival centres in Hull and Lincoln.

Ms Austin said that further developments throughout North East Lincolnshire are planned through a twenty-five-year Masterplan, which everyone in the area is keen to see come to fruition.

“Economic changes will dictate how the plan will progress, but everyone agrees that these improvements are essential to the future prosperity of Grimsby. Closer working relationships between the private and public sectors will ensure these changes see their full potential,” she said.

In addition, she believes that the development of renewables in the area is a great opportunity, which must not be missed.

“If we are able to capture this opportunity, the benefits would be enormous to Humberside and North Lincolnshire, creating jobs, additional housing, increasing wealth in the area and building the retail and leisure offer in the region,” she said.

Staying with the theme of shopping, perhaps one of Grimsby’s other attractions is that it offers people choice. If mall shopping is not for you, you can always explore what is on offer in the Freeman Street, Victoria Street and Abbeygate areas of town too.

CLEETHORPES
Grimsby’s award-winning neighbour Cleethorpes is not only a popular holiday resort, it has also been dubbed as one of the best places to live.

Bustling with tourists at the height of the summer season, it’s also well worth visiting in the Wintertime – when you can enjoy a bracing walk on the beach followed by a delicious plateful of golden fish-and chips.

And if you love arts and crafts or just want somewhere to take a break and gaze out to sea, you should make a point of popping into The Discovery Centre in King’s Road.

This is where you will find Artlandish Ltd, an arts charity which boasts two galleries, a shop where you can buy original gifts and The Observatory, on the top floor.

Gallery general manager Amy Wood said: “The Community Gallery showcases a wide range of different people who we work with, whether that is local artists displaying their work or schools, youth groups and community groups which we have worked with on projects.

“Attractions lined-up for 2011 include PureRaw (from 28th January to 16th February), which is two artists showing their work around the theme of extreme emotions

From 18th February to 5th March, young Grimsby photographer Joseph Marriot will be showing people the wide range of pictures he takes of the local area.

In the Exhibition Gallery, Artlandish and Friends will be showing their work throughout January.

“For the whole of February we have a Cut Click Mail Exhibition. People from all over Lincolnshire have been submitting work via post for this, so visitors can expect to see a variety of work.”

And, in September, the Gallery is preparing to welome back artist Vivienne May McKellar, who was recently artist-in-residence in The Observatory in November.

The Observatory, which is based on the top floor of The Discovery Centre is popular with both locals and visitors to Cleethorpes because it offers a fantastic view of the town and, on a good day, you can also see Spurn Point and Hull.

GRIMSBY AND CLEETHORPES
Designer creator Ashley Gregory is fishing for some big bites in the interiors world after winning the opportunity to exhibit at a top venue.

The twenty-six-year-old’s amazing ‘fishtank tables’ have captured the attention of the Furniture Industry Research Association (FIRA) and his work is being displayed at its Hertfordshire centre, for four months

It means that Ashley’s strikingly-different Aqua Fusion designer furniture will be given great exposure.

And, fingers-crossed it could turn the Cleethorpes entrepreneur – one of the youngest–ever designers to get his work on show at FIRA – into a household name and see him following in the footsteps of acclaimed designers such as Terence Woodgate, Kevin McCloud, Kelly Hoppen and Matthew Hilton.

Ashley’s quirky VDiner, and his other versions, can be used purely as aquariums or as functional pieces of furniture.

After also being given the seal of approval by London designer Lee Roland, Ashley now hopes to sell his pieces commercially – say for reception areas and boardrooms – and also to have them stocked by three or four retailers in the near future.

Mr Shrimpton said Ashley had been invited to display his work because he “demonstrates exceptional talent and has produced some quite outstanding furniture.”

Ashley said: “I am very excited. I’ve seen some fantastic furniture there, but I never imagined I would actually get to showcase mine and for it to be exposed at the highest -possible level. Ask any designer of furniture, this is a real privilege.”