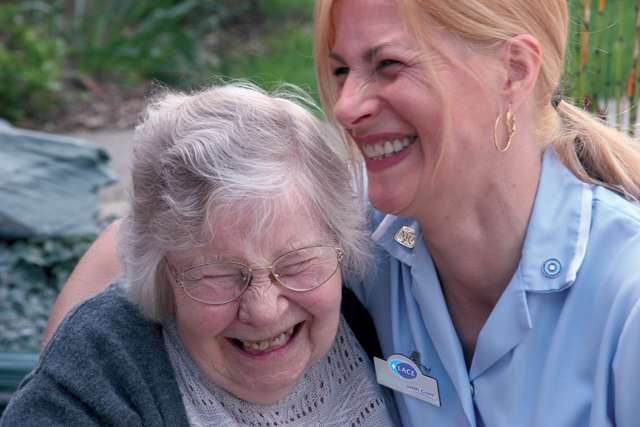 LACE Housing is celebrating its 50th Anniversary by creating a year of golden memories to treasure. 2014 is proving to be action-packed as LACE Housing forges ahead with exciting property schemes, raises funds for a new ambulance and builds stronger working relationships with its partners.
Everything is aimed at providing property solutions and support, tailored to the needs of today’s independent older person. The organisation is also keen to alleviate loneliness and isolation wherever possible.

Best of all, it is all being delivered by a dedicated team of 285 employees and more than fifty volunteers.

During the year, LACE Housing staff, tenants and supporters will also be taking time to reflect upon how far the organisation has come since it was founded in 1964 by the late Frank Eccleshare OBE.

The housing-with-care specialist will also be throwing open its doors and encouraging more people to discover how much it offers individuals or families looking for supportive solutions for their older relatives.

LACE Housing has built up a fine reputation for its housing developments, which offer leasehold and shared-ownership deals, as well as sheltered homes and accommodation which come with extra care.

Chief executive, Nick Chambers said: “The popularity and demand for LACE Housing’s properties has encouraged us to invest in new projects this year.

“February 27th saw Lincoln MP Karl McCartney opening Jubilee Court, off Newport – which is, of course, appropriately named for our anniversary year. This smart new complex comprises one and two bedroomed apartments and is only a short distance away from our very first development – Rasen House in Rasen Lane.

“Apartments within Jubilee Court can be rented or, alternatively, purchased through a Shared Ownership Scheme.

“New funding through the Homes and Communities Agency means that we also have other developments in the pipeline. Again, these are designed to appeal to older people who want modern, easy-living solutions, with support on hand if needed.

“We are seeing an increasing number of people who are keen to rent smaller properties and housing which supports their desire to maintain an independent lifestyle, or which also offer on-site support,” said Nick.

Two funding allocations from the Homes and Communities Agency have allowed LACE Housing to move forward with developments in Saxilby and Grantham.

“We started on site in Saxilby at the end of April and we are building twelve retirement apartments along Bridge Street. Eight of these will be for rent and four for sale. This development is due to be completed in October,” said Nick.

“We also have funding for twenty-one apartments to rent and nine bungalows for sale at Poplar Farm in Barrowby Road, Grantham.”

Estate agent Mundys is responsible for sales at the Saxilby development.

“A lot of people want to buy a property at eighty per cent of its open market value and choosing this route allows them to release money to support their pension and lifestyle,” said Nick.
LACE Housing’s portfolio includes:

On the care front, LACE Housing also has two refurbished flats – within the Ruckland Court Care Home complex on Ermine Estate West and Eccleshare Court Care Home in Ashby Avenue, Lincoln, which can be booked for respite care.

The organisation has also recently been appointed a preferred provider of housing with extra care, in North East Lincolnshire.

LACE Housing is determined to help tackle issues of isolation and loneliness which can be a particular problem, especially for the older generation.

To this end it is busy raising money for a special ‘golden ambulance’, which will be fitted out to the organisation’s specifications, so that it is capable of carrying six wheelchair users at any one time.

Fundraising efforts for this vehicle received a superboost during the month of April, when Nick Chambers was joined by a team of five colleagues who completed the Alfred Wainwright’s Coast-to-Coast Walk – from St Bees to Robin Hood’s Bay – taking the organisation a leap forward towards its £30,000 target.

Under the banner of Lincs Independent Living Partnership, they are continuing to deliver transport services across the County.

The overall aim is to ensure that people who are at risk of being hospitalised have a full range of care and support services on hand, which will allow them to return home as soon as possible.

LACE’S FIRM FOUNDATIONS
Frank Eccleshare OBE was a true champion of the elderly and his action to improve their lives has left a lasting legacy.

After wartime service with the RAF, Frank returned home to continue his trade as a master builder, but it was his concern about the standards of housing that many older people lived in that inspired him to lay the foundations of LACE Housing.

LACE Housing’s first project for older people saw the development of Rasen House, which was completed in 1966, but Frank’s vision has continued to inspire right up to the present day.

Frank received the OBE in 1978. Other honours saw him made a life president of Age UK, Lincoln; a proud recipient of the Lincoln Civic Award – which he originally presented to the city – and an Honorary Lincoln Freeman.

Frank sadly passed away in January 2008, but both he and his late wife Kathleen personally used LACE Housing’s services.

14TH MAY: Service of Thanksgiving at St Peter-in-Eastgate – to be attended by all those who have supported the work of the Association over the years.

18TH AND 19TH JUNE: LACE Housing will be in attendance on stand 7-43 at the Lincolnshire Show, as part of the Lincs Independent Living Partnership – a joint venture launched on 26th March.

20TH JUNE: LACE Housing is hosting an Open Day across all its developments and welcoming tenants, their families, friends and other people keen to learn more about its properties and services.

17TH JULY: Residents and tenants will be treated to a special afternoon tea, with live music in Lincoln’s Assemby Rooms.

26TH SEPTEMBER: Celebrations are the order of the day at LACE Housing’s glittering Annual Awards and Presentation Evening at The Bentley Hotel in South Hykeham.