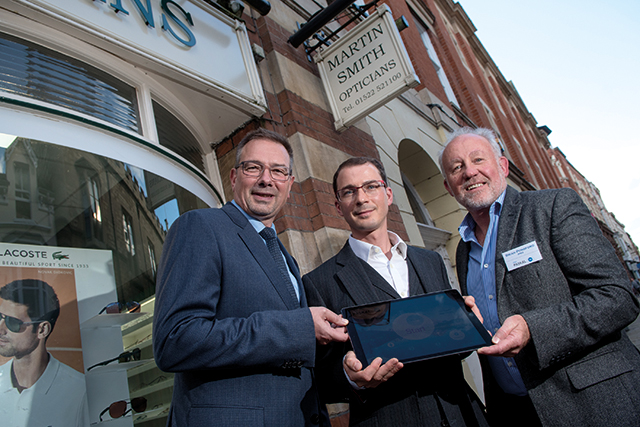 Award-winning Saltergate based optometrist Martin Smith Opticians is continuing to lead the way in optical clinical services and diagnostics by being the first practice in the UK to introduce the Paskal 3D Sight Testing system.
Invited guests saw the launch of the revolutionary and ground-breaking 3D eye test at the consulting rooms last month, in the presence of one of the system’s inventors, Mr Fritz Passman.

Practice owner, Dr Martin Smith BSc DOptom DipTp (IP) Prof Cert Glauc MCOptom, Optometrist Independent Prescriber explained that since purchasing the business aged 24, and especially in the last decade since he undertook his professional doctorate in optometry, there has been a rapid investment in technology to support the quality of services offered.

Dr Smith said: “I started investment in my new business with a computerised appointment system, an electronic phoropter head and a fundus camera and gradually we evolved. In 2015 we took a big plunge and refitted the practice completely to how you see it today. We’re now on our second OCT and our second photographic slit lamp.

“Whilst everything else has changed around it, the projector chart for eye testing has gone from being the most advanced piece of equipment in the practice to the least.”

The refraction method for eye testing has been in place for around 150 years and is only corrected for binocular vision after each eye has been tested in isolation.

Dr Smith said: “While attending Optrafair, myself and practice manager Sue Edwards were invited to see the Paskal 3D Sight Testing System. I had never seen anything like it and it really made me think that we have been approaching refraction in the wrong way. For the first time with this system, we are now able to refract the patient in their natural state with both eyes uncovered whilst the eyes are viewing a background which stimulates their binocular vision.

“The system is not only revolutionary but also very entertaining, a quality which shouldn’t be dismissed as frivolous; refraction is not only boring and in some cases terrifying for the client but we optometrists find it boring too!”

The Paskal 3D Sight Testing system is already being used extensively in Germany, Austria and Switzerland. Both the patient’s eyes remain open in front of the polarised filters, seeing binocular images to keep the eyes relaxed, while being able to present monocular charts to each eye. Images are then viewed via a 3D TV screen which delivers the test in a ‘cinema’ style.

The system is now available to all clients of Martin Smith Opticians to support their expert diagnostic and prescription services.

The practice is also receiving national acclaim for its contribution to the industry, as Dr Smith won the AOP Optometrist of the Year Award for 2015; Sue Edwards (practice manager) was a Finalist for the Opticians Award Dispensing Optician of the Year 2017; and there is a great deal of excitement around the practice for 2018 as Dr Smith is a Finalist for the AOP Optometrist of the Year, and the Optical Team are Finalists for Team of the Year. Results will be announced in January 2018.

If you would like to book an appointment, tel: 01522 521100 Martin Smith Opticians, 22 Saltergate, Lincoln LN2 1DH www.martinsmithopticians.co.uk