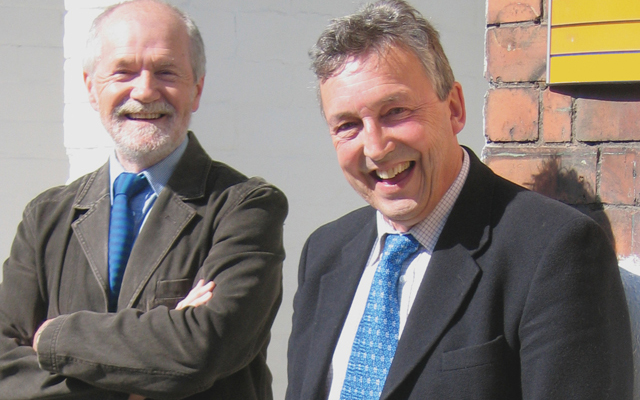 From this month, architects and surveyors, Glew + Smith have relocated their offices to Louth and rebranded the company as GMS Architecture
It seems fitting that since Glew + Smith’s recently vacated offices, on West Parade, Lincoln had an impressive view of the towers and turrets of the west front of Lincoln Cathedral that the new offices of GMS Architecture on Eastgate, Louth should have an outlook to St James’ Church and its soaring spire.

It will be a daily reminder of the core work of the practice; advising and designing for the rebuilding and conservation of historic buildings and monuments. Design for new builds is also undertaken and this experience has served well when the brief is to sympathetically combine the contemporary with the old.

The move and the rebranding have been prompted by the reduction in working hours of practice partner, David Glew, who will now become a team consultant for GMS Architecture. His partner, Chris Mackintosh-Smith, has become team principal, still supported by a team of six members of staff, many of whom have relocated to the Louth offices too.

This is the latest evolution of the practice which was originally started by John S Johnson, taken over by David in 1981 and is now coming under the ownership of Chris.

Chris moved to Lincolnshire in 1997 from Bristol. His family already had roots in Louth and he and his extended family moved to Saltfleetby House. During the subsequent years he worked both as a freelance surveyor and as a technical officer on defence establishments within the county. Chris met David at a seminar and after completing another university degree, he formed a working alliance with David for historic research and building survey work.

With over six hundred Anglican churches in the diocese of Lincoln, although Glew + Smith have not worked on all of them, there has been a continual cycle of work to keep them busy, with 400 church projects carried out to date. The move to Louth will allow more focus to be placed on the east and north where Chris sees the opportunity for further work.

“We have a lot of experience of complex heritage projects,” Chris said. “Many agencies have to be consulted and criteria met. You can be dealing with English Heritage, the Lottery Fund, the diocese or the local authority but your immediate client will be members of the local community or congregation.”

“Projects can take many years of research and applications before they even commence and we have that experience of navigating the problems and pitfalls. We can offer the continuity of experience and care that clients value.”

One of the ways Chris has found of reassuring non-professionals who are involved in projects is to arrange a hard hat day. People can be taken on site, onto a roof or scaffolding, and actually see what work is being done.

“Because a lot of our work is above eye level, or never seen at all, it is hard for clients to understand where all the effort and money is being spent. Once you are looking down on a church roof from scaffolding the size and scale of the works always takes people by surprise.”

The relocation has given the GMS Architecture team a chance to streamline their systems and over the last six months many of their remaining manual operations and archives have been digitalised.

“We shall still be the same practice, with the same staff,” concluded David, “but with a new name and new location. Our clients in Lincolnshire and adjoining counties will still enjoy the same expertise and professional service they have enjoyed for the past decades.”

HELPING TO PRESERVE HERITAGE
Glew + Smith were commissioned by Ruddocks of Lincoln to be architects for the refurbishment of their High Street store in 2009. This was a demanding project which required not only a complete makeover of the shop internally and externally but retention of all the historic features of the building. Major structural improvements were required but the new shop front was designed to match the architecture of the building’s upper stories and paint analysis revealed original colours which were matched as closely as possible.

A LEGACY OF FINE DESIGN
It is thirty years since David Glew read that an architectural practice was for sale in Lincoln. Although he had never visited the county before it proved to be the ideal opportunity to move his wife and young family out of London and settle with his own business. David had already been involved with contracts for historic buildings and churches in what were the early days of conservation but he worked alongside the retiring owner, John S Johnson, over a period of time, to take over the well established practice and develop the specialist heritage surveying and conservation work it undertook.

“I can remember my first clients were St Nicholas’ Church, Ulceby,” David recalled. “We still work for them today and I receive the same hospitality from the churchwarden, Mrs Margaret Thompson, as I did that first day.”

“The contract was to rebuild the church spire and A J Furse dismantled it and H Jowett completed the rebuild. That company later became K J Lipton & Son Ltd, and we have just come to the end of a contract with them to repair the stonework to Nettleton Church tower.”

Not all of David’s work has been on heritage buildings and the practice has designed and project managed many new buildings and homes. Conservation work did continue to grow and David became more interested in Lincolnshire’s architectural heritage. He is a founding member of the East Midlands Earth Structures Society and met Chris Mackintosh-Smith at a seminar on mud and stud buildings.

David has had a working alliance with Chris Mackintosh-Smith for the last ten years and they formed the partnership of Glew + Smith in 2008.

“One of the buildings of which I am most proud is the café atrium for the New Life Church, Lincoln which we completed in 2005.” David explained further. “The challenge was to unite two listed buildings and make what was a dark, neglected passage into a vibrant meeting space.”

“It was a very difficult build because access was only available through two doorways but the result has been a lovely blend of the old and the modern.”

David and his wife, Diana, still live in Nutwood, Nocton a property he bought in 1980 which was a derelict barn. A small feature about the property appeared in ‘Lincolnshire Life’ in August 1983. The house looks very different today and David joked that he probably does too. Although he is reducing his working hours, David’s wealth of knowledge and experience will still be on hand, working as a consultant for GMS Architecture. “I want to give the same continuity for clients, projects and staff that I enjoyed when I took over from Johnnie Johnson,” he concluded. “I’m not retiring but rather reducing the hours I commit but I will still enjoy reassuring and guiding the many non-professionals we work with, and continue my involvement with Lincolnshire’s fascinating buildings.”