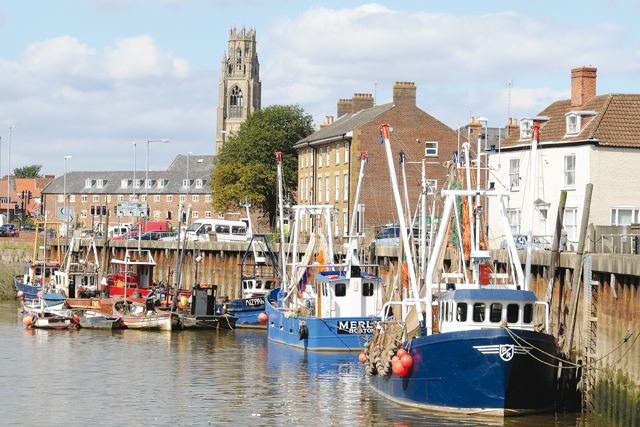 On top of the trend

Market town traders are being urged to throw more weight behind a business group which is determined to drive up Boston’s economic fortunes.
Despite facing some objections this Summer, Boston BID said it is “business as usual” for the organisation which is keen to encourage the town’s independent traders and national shopkeepers to share their bright ideas for boosting local wealth.

Boston Business Improvement District manager, Niall Armstrong, said the town can be proud of the fact that it has fewer empty shops than many other places.
But there is still plenty to do if this port, shopping and tourist destination wants to raise its game.

The BID was voted into existence by traders who pay a levy towards its services – separately to their business rates. And it is making some headway with its plans.

“All the UK’s BIDs, which have come to the end of their five-year life, have so far been re-voted in.

The popularity of BIDs as the way forward for towns keen to help themselves, is growing,” said Mr Armstrong.

“We are always open to suggestions about what we could do to improve life for business owners and managers. Obviously, there has been a change of Government and we may face a slowdown but traders may have good ideas which we could work with.”

Mr Armstrong said the BID already contracts three rangers, who patrol the streets from 7am to 7pm every day, working in conjunction with the police to help nip crime and anti-social behaviour in the bud. They also act as ambassadors when dealing with visitors.

“But many people mistakenly think these people are employed by the police or feel that the Force should be responsible for this work,” said Mr Armstrong.

“The BID has bought street cleaning equipment and two people who are on placement with us (at no cost to the BID) are supplementing the work being done by the council.

“But, again, many businesses think all this work should be done by the local authority, but the Council already struggles to provide a minimum service, so again the BID is providing a service,” he said.

Over the past year many projects have been started or are currently in the process of being rolled out.

These include an offenders database, which will allow levypayers to get a better idea of who is committing crimes against business and work with the police to tackle this, the BID Crime Reduction Partnership, member discounts, promotion through the BID website and a Roadworks Hotline.

“New life has been breathed into two empty shop units in Strait and Wide Bargate, where the former Sketchleys cleaners and Card Fair stores have been given fresh identities, as part of a £52,000 regeneration project.

One, known as Room 52, provides local artists and schools with a super base in which to showcase their work, while the neighbouring Community Room is used by many voluntary groups, to offer people information and advice and highlight their many services.

This project is the result of a three-way collaboration between the BID, Boston Borough Council and South Lincolnshire Community Voluntary Services (CVS). The CVS is leasing the shops from the Texas Group at £1 per year each.

“One of the good things about Boston is that, even in the economic climate, just 3.2% of our available commercial property floorspace remains unlet, compared to four per cent in Spalding and 6.6% in Lincoln. Basically, when units become empty they are reoccupied fairly quickly,” said Mr Armstrong.

We are looking at putting exhibition stands, featuring town maps, into empty premises. These can improve the appearance of empty buildings in a low-cost, flexible way, he added.

Boston also boasts many long-standing business names. On the retailing front these include Cammacks, Oldrid’s, Coneys and Tate’s. Well-known manufacturers include Magnadata and Fogarty.

Cammacks, which was established in 1919 is more than ninety years old and is run by fourth generation family members.

Based in a four-storey building in Wide Bargate, the business also has a Pen Street store, selling three-piece suites and dining room furniture, and a studio in Grove Street West which specialises in beds and bedroom furniture.

Earlier this year Jason Brackenbury decided to do make the most of years of experience and great contacts gained in the field of fitted kitchens into a new venture.

And after approaching Cammacks, on 30th June he launched Kitchens at Cammacks on the ground floor of its Wide Bargate shop, to the benefit of both parties.

“Things are going fantastically and this is proving to be a good move,” said Mr Brackenbury.

Oldrid’s, Boston’s well-known Department Store, is a popular choice with locals and visitors alike and now boasts an ever-growing range of major brands. For instance, the shop has just welcomed the fashion name Wallis.

Managing Director, Annmarie McClintock, said great teamwork is at the heart of the business.

“The success of the store is down to our ability to tailor the mix of brands and products offered, to fulfil the aspirations of our loyal customers. Of equal importance is the flexibility to reflect changing trends, such as the recent revival of needlecraft, sewing and knitting, and the use, where appropriate, of local producers and suppliers,” she said.

Oldrid’s has just launched its 2010 Christmas Shop, which offers a unique mix of festive decorations and gift ideas. The company will shortly be marking the first anniversary of its online store (oldrids.co.uk) and it was due to introduce hundreds of gift ideas for Christmas by the beginning of November.

Tate’s in New Street is one of the country’s oldest and most traditional fish and chip shops.

It is owned by David Tate and his wife Dawn. David has worked in the business, which was formerly run by his late mother and father, Eva and John, for thirty-five years. He and Dawn took over fully in 1992 and now employ about twenty people.

The fish (and chicken) restaurant seats one hundred and twenty people, but there are also tables and chairs outside. Customers flock to the chippie from miles around and it is also popular with visitors who return to the town.

While a good selection of shops is obviously key to increasing any town’s wealth, a good programme of events also plays an important role in attracting more visitors.

And, with that in mind, Boston’s BID team is currently busy planning for the crowd-pulling Christmas Market on 12th December, when live reindeer will be taking part in a special parade.

The event includes an outdoor market with a stage, music, steam engines and children’s fairground rides, plus an indoor craft market in the Assembly rooms.

BOSTON 200
Business people and others have the chance to find out how this busy port town is kept safe from flooding.

A four-day exhibition to mark the 200th anniversary of the great flood of 1810 takes place in the Community Rooms in Strait Bargate, from 10th November to 13th November. It is free, and open to visitors between 10am and 4pm each day.

These will highlight what work has already been carried out and explain what continues to be done to protect Boston in the future.

MOST IMPROVED
Boston Borough Council has moved from being one of the worst local authorities in the country to one of the most improved.

Monumental efforts by staff have seen the council turn Audit Commission appraisals of its performance and improvement on their head.

And they have done what would normally be expected to take two years, in just nine months!

Chief executive, Richard Harbord, said staff had responded after the Commission issued a damning report stating that the authority was performing “poorly.” Now it has been given a clear judgement – it is offering Value for Money.

Mr Harbord said that the effort made by staff was “outstanding.” Their hard work meant that the threat of Government intervention had been lifted.

“To move from where we were nine months ago to where we are now is excellent. It is virtually unheard of and means we are one of the most improved councils in the country this year.”

FAST FACTS ABOUT BOSTON
• Boston’s most famous landmark is ‘The Stump’ – the fourteenth century St Botolph’s Church, which has a 271ft high tower.
• Boston’s Port was established in 1886 and privatised in 1990. Handling everything from animals feeds, to grain, timber and steel, it deals with 1.5m tonnes of cargo every year.
• Tourist attractions include the eighteenth century Customs House at Packhouse Quay; Fydell House in South Street and Boston Guildhall (St Mary’s Guildhall and Guildhall Museum) – also in South Street. The Guildhall is where the Pilgrim Fathers were imprisoned in 1607.
• Boston is home to the country’s oldest working windmill, The Maud Foster Windmill, which dates back to 1819.