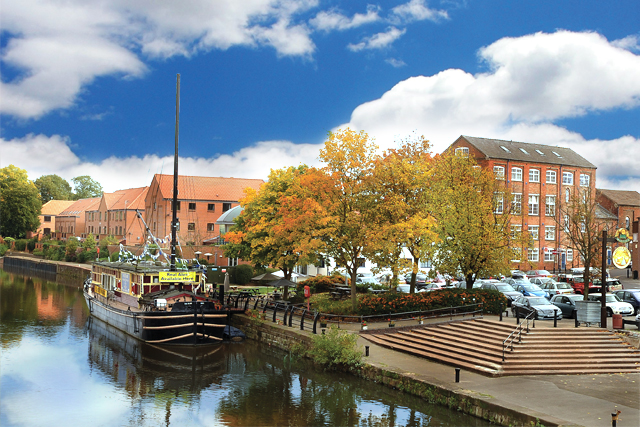 Ready for the festive season

In today’s tough economic climate market towns need to boast a uniqueness if they are to stand out from the crowd.
Fortunately, Newark is bursting with character and blessed with having a superb blend of interesting history, a wealth of independent businesses, great eateries and lively markets.

It is particularly good to see The Buttermarket – the shopping centre behind the Town Hall – looking more vibrant. So is that down to the fact that it has attracted more tenants, or because current ones have expanded?
Centre manager Martin Rendle, who is upbeat about the centre and the town’s prospects, said both factors have had an impact.

He said: “The Buttermarket is a stylish shopping destination, somewhere that independent stores can flourish and that shoppers want to visit to find exclusive styles, handmade gifts and unique items for the home. Some of this success has been down to securing the right sort of new tenants and some has been supporting existing stores as they expand.”

The Buttermarket certainly appears to have grown in popularity with both shoppers and tenants and it is conveniently situated too, because it provides a handy link between the Market Place and Middlegate.

“I think people thought they knew The Buttermarket but, as the tenant mix has changed, so has the atmosphere of the centre and its appeal. We’re trying to encourage shoppers to ‘look again’ and rediscover what’s on offer. Prospective tenants can see the benefits of locating somewhere known for its mix of quality, independent stores,” said Mr Rendle.

All but three of the stores in the centre are independently owned and they mainly comprise small businesses that work really hard to give customers something which they can’t get elsewhere – whether that is products or services.

“We have a high proportion of stores that appeal to women, selling homemade gifts and homewares plus clothing and accessories. But our stores aren’t exclusively female orientated,” he added.

“We have also launched a programme of quarterly events, designed to enhance the shopping experience and put a smile on people’s faces,” said Mr Rendle.

Just four of The Buttermarket’s twenty-four units remain empty, and there’s space in the Colonnade area for more market-style stalls. Mr Rendle added that he is always keen to work with retailers to find something to suit them.

Newark is certainly not immune from the struggles currently being faced by other market towns across the country, but Mr Rendlle believes its wonderful mix of niche stores is one of the local economy’s strengths.

“I feel that the number of independent stores in Newark sets it apart from other similar towns which have more homogenous high streets. We are finding that the ability to offer ‘something different’ is a real selling point and this goes for our events programme too. At the end of the day, it comes down to offering good service and good value, which is what we and our stores aim to do,” he added.

Newark’s Market Place is just a few steps away from The Buttermarket, and is a hive of activity most days of the week and worth a look whether you want a new rug for your hallway, some bird food or fresh fruit, flowers and vegetables.

The town has its fair share of national name shops – think Marks & Spencer, Boots and Wilkinson for starters – but there are also many more independents waiting to be discovered. Sometimes you have to wander down the town’s smaller alleys to find the treasures.

The popular womenswear outlet, Jane Young in Chain Lane, which was established in the early 1950s and has won several Drapers Record awards including Fashion Retailer of the Year on two occasions, continues to be a pace-setter for shops in that sector regionally.

Very much a family concern, now with a third generation of the family in the business, it regularly attracts customers from most parts of the country and overseas. Janet Wilkinson, who was born into the fashion business, is a director of the company along with her daughter, Jane.

“It has been our constant aim to provide the very best in personal service by well-trained and attentive staff who take customers through the collections and advise them on what really does look best,” she said.

Jane Young will be holding a special Joseph Day on 15th November when, in addition to viewing the latest collections from this well-known label, customers will also be able to see all the exciting clothes and accessories the shop has lined up for Christmas.

Fashionistas will also want to check out Blessed in The Cavalier Building, just inside the town on the main route in from Lincoln, which has just marked its first anniversary of trading in Newark. It is run by Carly Aldred and mostly sells brands which are normally found in London. Her sister, Cassie Masters runs Flavours, the café next door.

With Christmas fast approaching, jeweller Andrew Michaels in Stodman Street might also be a name to put on your shopping list, especially if you are searching for a stylish timepiece.

For fashion, gifts and fabulous accessories, Domino on Stodman Street is a must. Nick and Valerie Newsum have sought exclusive collections of decorations, cards and much, much more to tempt you this Christmas.

Most of the town’s businesses are preparing for the busy festive period with special events planned to put everyone in a celebratory mood.

The new Business Club vice-chairman and chairman of its Retail Group, Michelle Allen, said the club has a number of initiatives to help increase footfall in the town – such as late-night shopping and the Christmas Market.

“Newark is a vibrant town for business, but the section that needs more help is the retail sector. We have looked at initiatives to get the retailers working together to increase footfall. Everyone wants a very good Christmas and they are hopeful they will get one.”

It is hoped that the dumb barge, the Leicester Trader, which was the last of what was once a familiar sight carrying cargoes on the River Trent and Humber estuary, will lead to increased footfall into Newark.

Although unglamorous, this type of barge was the workhorse on our rivers and little changed through horse drawn, steam and then motor towage times.

As an unpowered barge she was built in 1953 by Richard Dunston of Thorne, near Doncaster.

Not one of these Trent size barges survives in its original form. The Leicester Trader is one of the few that has remained in near original condition. She has had a varied life since she stopped carrying cargoes to Nottingham and the many other wharves along the Trent.

Barge owner and preservationist, Les Reid has always thought that the Trent Navigation and its rich history should be put on record for future generations before it is lost in the passage of time.

So he purchased the ‘Trader’ and brought it back to home waters in Newark where it will be transformed into a floating museum and heritage archive dedicated to the River Trent.

“It is intended to show how this important waterway played a vital role in the development of the towns and city which the waterway serves,” he said.

“Wherever you go in this country, you will find boat museums or craft but there’s nothing for the Trent or Fosdyke.

“We are always looking for archive material – memories from people who worked on the river, photographs, tales. It’s important to preserve them for future generations.”

The idea is to launch a Heritage Lottery bid so the 82ft barge, which weighs thirty-three tonnes, can be restored as a museum.

Exhibitions of bygone days on the river had been held on the barge and public open days on board have helped raise funds towards the project.

BLESSED
It is hard for new businesses to make an impact when the country is going through a double-dip recession, but one fashion store in Newark has bucked the trend.

Blessed in The Cavalier Building, Warwick Brewery, has just celebrated its first birthday and has been so successful that owner Carly Aldred, has expanded and opened another boutique seventeen miles away, in Lincoln.

Stylish labels, normally only found in London are proving popular with customers young and young-at-heart.

“The Newark shop has done really well and seventy-five per cent of our clientele is made up of repeat customers, week in, week out,” said Carly. “Newark is a quality town with local independent shops. It is a nice environment and everyone knows each other.

“Most of our brands are unique to us in the town and they are bringing people into Newark because normally you can only get them in London,” she said.

“We sell smart workwear, smart casualwear and occasional wear and have customers in their thirties, forties and fifties, who want to look stylish but want something different to the student look which a lot of shops are going for now.”

Carly puts her success down to a number of different things – including Blessed’s loyalty scheme and quality goods.

“We have gone for quality because people seem to prefer to spend a little more on something that is going to last them now,” she said.

Christmas is a special time for Blessed and Carly, when she transforms the shop into a Winter Wonderland with a snow machine, fairylights and late-night shopping. That special ambience is also set to be a key feature of Blessed’s newly launched outlet in Lincoln.