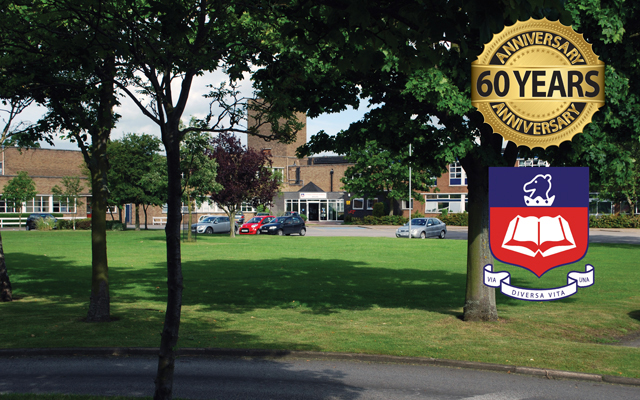 Occupying a large leafy site on Moor Lane, North Hykeham, Sir Robert Pattinson Academy is this year celebrating its sixtieth anniversary.
Head Helen Renard has been in post since 2009 and is proud to maintain the traditions and standards of the school, which is named after the man who was briefly Liberal MP for Grantham and chairman of Kesteven County Council from 1934 until his death in 1954.

A SCHOOL FAMILY
The original roll call when the school opened its doors in September 1953 of 545 boys and girls, 21 teachers and 20 kitchen and cleaning staff has now grown to 1,300 students, 100 teachers and 80 support staff. It is a scale which makes the school viable whilst at the same time keeping it small enough to retain the ethos of a family and a community working to help every student reach their potential.

“One of the quotes from a student picked up during our most recent Ofsted inspection was that she thought of the school as her other family and I think this is one of the highest compliments we could receive,” explained Mrs Renard.

COMPREHENSIVE EDUCATION
The school began as a Bilateral Secondary School and has throughout its further history as a self-governing school, a foundation school, a Beacon school and now an Academy had a comprehensive intake. While the school recognises that the abilities of the students can be diverse, the goal has steadfastly been to make sure that when young people leave they have qualifications and are prepared for the next stage of their education or to begin their working life.

“We know that after leaving here students will go in many different directions but we are able to offer a great choice of Key Stage 4 GCSE, BTEC and NVQ subjects. Our joint sixth form with North Kesteven School has 540 students studying for ‘A’ level and level 3 BTECs. About two thirds of students go on to higher education or university.”

STUDENT ACHIEVEMENT
Every student will find the resources and support for them to optimise their skills and interests. Past students have achieved Oxbridge and Russell Group university entrance. Ex-student sporting champions include Olympic swimmer, Kate Hayward and London Paralympics gold medal winner, Sophie Wells MBE.

LANGUAGES
The school specialises in languages, science and mathematics and this focus has continued since acquiring Academy status in August 2011. French, Russian, German and Spanish are taught and all students achieve a language qualification. Extensive international connections support visits to partner schools in Germany, France and Portugal while the British Council has supported project based trips to China, Romania, Finland and Turkey.

PLACE IN THE COMMUNITY
“One of the assets I feel most benefits the school is our location and wonderful grounds, where Hykeham Hall once stood. When you enter the site, it is very peaceful and could still be in the middle of the countryside,” explained Mrs Renard.

The extensive grounds are used as sports fields but there was ample space for a new building following a bequest; the wonderfully equipped purpose-built John Alexander Music Block was opened in 2004.

Connections with the wider local community begin just across the road from the school’s main gate with North Hykeham Day Centre, where some students work as volunteers and a Christmas Party and Summer Tea Dance are held in the school hall for centre users.

Adult Education courses are held on term-time evenings in conjunction with Lincolnshire County Council and Grantham College and partnership with the Air and Army Cadets has seen a new building in the grounds which is in use both day and night either by the School or by the Cadet Force which many pupils choose to join.

A WIDE CATCHMENT
A recognition that the school maintains traditional structures of houses, sports and competition in its community – as well as fun curricular based contests such as the Robert Pattinson Bake Off or the annual musical production, which next year will be Hairspray – has made the school a popular parent and student choice for secondary education.

Half the students use the bus service to travel from surrounding villages while the convenience of the train station at Hykeham makes the journey from Newark and the hamlets in-between an easy option.

Year 5 development days for prospective students and their parents are held in the summer term, while the September Open Evening is aimed at those in their final year of junior school. Parents are also welcome to book tours individually or in small groups to see the school in action during the day.

DEDICATED STAFF AND GOVERNERS
The Board of Governors for over twenty-five years was led by Mrs Barbara Wells MBE who is now Vice Chair to Dr Neil Appleby, Chair of the Governors. Barbara Wells has made a very special contribution to the school over these many years and produced the 50th anniversary book for the school in 2003.

“This school would not be the outstanding establishment that it is without the skill, dedication and enthusiasm of the staff body and support from our governors,” said Mrs Renard “and in our sixtieth year I am excited to be celebrating the heritage and achievements of this fine school.”