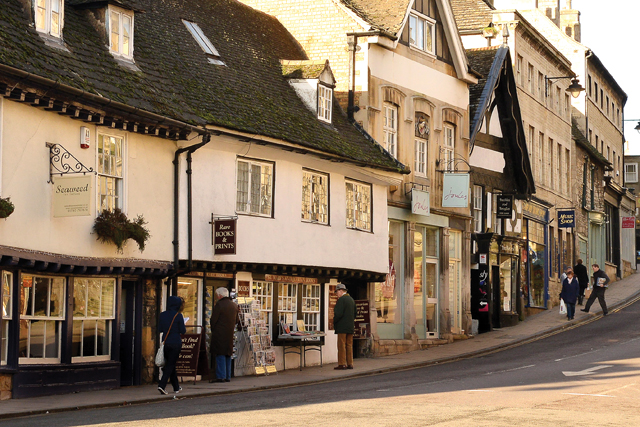 As 2013 gathers pace, it is refreshing to visit a Lincolnshire town where there are clear signs of business confidence and innovation despite the continuing uncertain economic climate.
An ongoing magnet for shoppers and tourists alike, the beautiful Georgian town of Stamford remains a destination where you can be sure of finding something different, whether that is a unique product, a quirky enterprise, new enterprise or unmissable entertainment.

Stamford has certainly seen some fresh investment in recent months and there is the promise of more. Niche traders have introduced stylish collectables and entrepreneurs have moved into the town from other locations.

That is not to say that Stamford has been immune from the challenges facing the UK’s high streets. In common with other commercial centres across the country, you will find empty units.

But, against this backdrop, you will also spot long-standing, well-known shops such as Lambs, Sinclairs, Black Orchid and The Fine Food Store.

When it comes to fresh investment, however, one of the town’s most vibrant businessmen has started the ball rolling in 2013 by building on the success of a brave new venture started last autumn.

Whatever the current state of the economy, Stamford chef, Thierry Daugeron remains one of the town’s shining stars and proof that spending in tough times can pay off.

Just six months after throwing open the doors on the Riverside Café in Wharf Road, Thierry is upgrading the upper floor of his stylish waterfront premises in ways designed to attract an even greater following.

February will see the upstairs Chandelier Room take on extra prominence as the glitzy Champagne Cocktail Bar opens, where he will also be offering lunches from Wednesday through to Sunday lunchtime.

And he is also revamping the adjoining room to create a fabulous nightspot and private function venue, complete with dancefloor. Thierry, who is planning to offer entertainment evenings, will also be hiring out this space – which is capable of catering for parties of up to 200 people – for private, corporate and family functions.

“We are really busy at the moment. I launched the Riverside Café in September, after deciding to reopen a café in Stamford. Three years ago we had something similar in Broad Street, but this is in an even more fantastic location,” said Thierry.

“It seemed to be the right time to do this and actually it is going much better than I anticipated. We are already thirty-five per cent up on our predicted takings.”

The Riverside Café is open seven days a week, from 10am to 5pm on weekdays and between 10am and 4pm on Sundays.

Thierry puts his latest success down to the fact that he is well-known, people remember his earlier café, everything he serves is freshly made and he also has a great team behind him.

In addition to his latest venue, Thierry – who employs twenty-five people and eight chefs – continues to run a highly-successful outside catering business and the Stamford Cookery School, which provides leisure courses for children and adults who want to learn all types of cookery, from French through to Chinese. This year, he will also be running the second Junior Masterchef Competition at Easter.

But it doesn’t stop there: this multi-talented chef and businessman also launched his own range of products, Thierry at Home, at the end of November 2011. These are sold in the café, on his website and at food fairs.

The Riverside building has also created a superb trading opportunity for Jules Hill and her daughter Lucinda Smith, who launched a bijou jewellery, accessories and gift shop late last year.

“Before opening here I traded in Loughborough for twelve years, where I mostly sold interior accessories, but I wanted to move into Stamford and have a business in the town. My daughter is also doing a business degree at University so we are working on this together,” said Jules.

“This is a good location. It is very central and close to hotels such as The George, The William Cecil and The Bull & Swan, and we are able to catch the attention of the passing locals and tourists.

“We have only been here for a short time, but we are already getting noticed,” said Jules. Lucinda has also created a complementary website for the business, www.lucindafrances.com

If you are looking for something a bit special for a loved one or very special friend, Stamford could be the place to find it.

In the run-up to Christmas, watchmaker Robert Loomes of Robert Loomes & Co unveiled a limited edition mechanical ladies watch and the timepiece, which is made in its entirety in England, is already proving a winner.

“It was launched at the Salon QP watchmaking exhibition at London’s Saatchi Gallery in November, where I had been a guest visitor a year before, when Robina and I looked at what watchmaking firms were doing and saw little in the way of classic ladies watches,” said Robert.

“Robina said, ‘We should be here next year (November 2012) with our ladies’ watch. That gave me ten months to produce the (appropriately named) Robina in time for the event and it was very well received.”

Sales have got off to a flying start and, as we went to press with this edition of Lincolnshire Life, Robert already had orders waiting to be made up.”

Just 100 ladies’ watches – which follow the launch of the limited edition Robin men’s version in January 2012 – are being made. They are priced at £5,850 and aimed at both the British and overseas markets.

“The watch is an investment. It is a statement piece and the owner should feel equally at home wearing it in the boardroom or at the theatre,” said Robert.

If you love art, you must make time to visit Kate Marshall at the Stamford Gallery in Maiden Lane.

Kate and her partner, John Partridge took over the business a year ago, from previous owner Ian Parsons, who retired after having the shop since 1997. Ian’s assistants, Claire Harris and Katie Marvell continue to work for Kate.

With walls bursting with a wide range of pictures and a rack of unframed versions, it’s just as well that Kate is happy to let people take their time when browsing for the ideal print or painting to grace their home or office.

“I have a degree in the History of Art and before we took over the gallery I spent ten years working for Jonathan Potter, a map gallery in Bond Street, London,” said Kate.

“Being a Yellowbelly, I was ready to return home to Stamford. Today we are working hard on the business and really enjoying running the gallery. We are stocking limited edition prints by popular and well-known artists, open edition prints and local works too.

“Our website – www.gallerystamford.co.uk – is something new for this year and we also hope to offer framing via this in the future. I think it is essential to have an online presence as well as a shopfront. It is another way of publicising ourselves, although I believe that seeing pictures ‘in the flesh’ is always better,” said Kate.

The future could see Kate staging themed exhibitions, but whatever it holds for the business, Kate believes in having an open door policy and is keen to keep abreast of what the art community locally and further afield is up to.

While spending time in Stamford, shopping is just one of the things that visitors can enjoy.

The George Hotel, which is steeped in history is a great spot to perhaps stop off for lunch, or even book an overnight stay and there lots of other good hotels and guest houses in which to stay.

The town also has a wide range of restaurants and coffee houses and you can also take time out to enjoy entertainment at the Stamford Arts Centre or Corn Exchange Theatre.