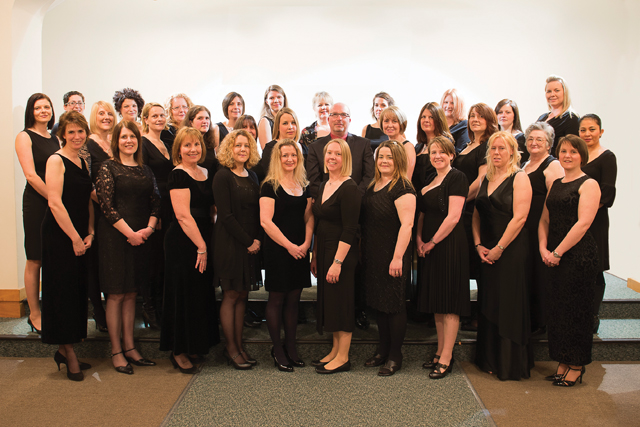 A chorus of approval from military wives

Ever since the Military Wives Choir first burst onto our television screens and into our hearts in 2011, the courage, comradeship and passion of its members has inspired the nation.
And to that end, its success has led to an incredible legacy with the establishment of a charitable foundation providing the support for a growing network of more than fifty similar groups in bases across the UK, Europe and Falklands Isles – including one right here in Lincolnshire.

The original choir was set up two years ago by Gareth Malone, who went to a military base in Chivenor, Devon, to establish a group for wives and girlfriends who were left at home alone while their men were away on duty for months at a time.

From their debut appearance on TV show The Choir, the group went on an extraordinary journey, which included a number one Christmas single, a visit to 10 Downing Street, a performance at the Queen’s Diamond Jubilee concert and a win at the Classical Brits.

Lincolnshire’s choir based at RAF Cranwell has gone from strength to strength after forming last year, thanks to the dedication of military wife, Nicola Swann.

“I joined a local community choir after moving off camp into one of the villages,” she said. “I’d seen the military wives on The Choir, and been inspired, but never had the courage to do it before, but after watching them I thought I’d give it a go.

“I really enjoyed it, I was having a good time and it was really building up my confidence. Then people started asking around Cranwell if there was a Military Wives Choir. Nobody was doing anything about it, so I started making inquiries and contacted the foundation – it was really helpful and told me all about what I needed to do.”

Nicola then enlisted the help of Daz Carter, a choirmaster from Cranwell Primary School, but admits setting up the group entailed more than she had anticipated, requiring the formation of a committee, signing of a constitution and opening of bank accounts.

There are strict criteria as to who is eligible to join a military wives choir: members must either be the wife, girlfriend, or relation of a serviceman or veteran, or else a member of the forces themselves, but there are no auditions and performing in public is not compulsory.

“They are really lovely ladies at Cranwell and we’ve got members from Waddington and Digby too,” said Nicola. “We cover all the services – the RAF, Navy and Army.

“There were no auditions, we just put it out there to see who would come along; it’s just singing, fun and very much a social get-together. We meet once a week on a Tuesday night, but we also do an alternate session on a Thursday afternoon to help the ladies who have children – so as to be inclusive to all.

“It’s really been great for getting people together. For instance there were ladies I’d regularly see at the school gate, but had never spoken to; now we know each other well, because of the choir.

“My children go to school on one camp, my husband is based at another and I was not connected to any of it – and now I feel I am.

“We had about thirty ladies come on the first night and we’ve got over fifty members now, including one who travels from Mansfield.

“She contacted the foundation to find her nearest choir, and they put her in touch with us. It’s the foundation’s aim to help ensure everybody is within travelling distance of a choir.”

It was following the phenomenal success of the single ‘Wherever You Are’, which raised more than half a million pounds for military charities, that those involved set out to create a wider network that could support wives, partners and women serving in the forces. In particular, the women from the first choirs wanted to share the enjoyment and pride they experienced through their own groups and The Military Wives Choirs Foundation has enabled them to do just this.

Through its growing network, the foundation says it is building something that brightens lives, strengthens military communities and enables hundreds of women to experience the enjoyment and friendship that comes from being part of a Military Wives Choir.

Now a registered subsidiary of SSAFA Forces Help (Soldiers’, Sailors’, Airmen’s Families Association), there are choirs in varying stages of development all over the country and beyond, wherever there are women with a military connection, and the idea is that if they find themselves relocated, they will always be able to join another choir wherever they end up.

Military Wives Choir Cranwell gave its first public performance on home soil at Digby last year and has since made several more appearances, including ones for the Royal British Legion, at Sleaford, for Remembrance Sunday and BBC Radio Lincolnshire at Christmas.

“It was very nerve-wracking performing live for the first time, but it was nice as we were on familiar territory, and we received a lot of guidance about waiting to do it until it was right,” Nicola added.

“We’re doing all sorts of songs, some bigger anthems, and pieces like ‘Don’t Rain on My Parade’ as well as more modern stuff like Abba – and then there are the solos too.

“We’ve got some exciting things lined up this year, including performing for our husbands and partners for the first time.”

When performing, Military Wives Choir Cranwell wear named T-shirts, while its formal uniform is black dress, with a distinctive corsage individual to each choir.

Nicola says the year ahead has lots in store, including performances during Armed Forces Week, Royal British Legion Remembrance Concert and the Festival of Remembrance at Whittle Hall.

And you can guarantee wherever its journey takes it, Military Wives Choir Cranwell will be a great ambassador for all those it represents, as well as the county.

For more information about the Military Wives Choir Foundation visit its website www.militarywiveschoirs.org