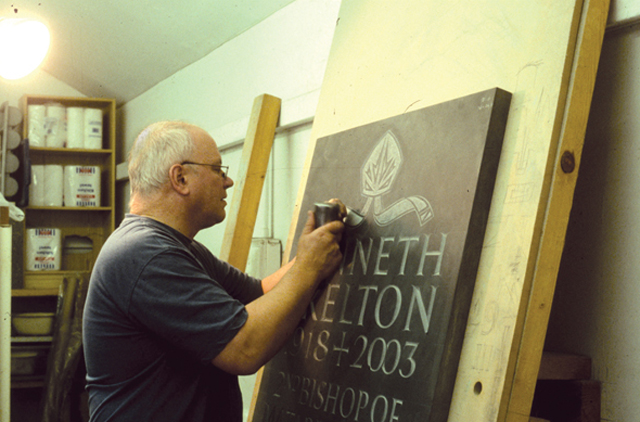 A man who thinks of the words

Caroline Bingham visited artist and craftsman, John Shaw at his Market Rasen workshop to learn more about the art of lettering and design.
I visit many different types of workshop around the county when I am researching information for features in Lincolnshire Life. There are noisy ones, those workshops that have their own scents and odours, those housed in steel clad units on modern, bright industrial estates and the inner sanctums for creative endeavours. John Shaw’s workshop falls definitely into the latter category.

“I like to work in a quiet place,” said John, “and Lincolnshire has given me a peaceful location.”

Born in Harlow, Essex, John grew up in Derbyshire and began his career at Camberwell School of Arts and Crafts, studying sculpture and drawing. To a certain extent frustrated by more fluid mediums for sculpture such as clay, John worked with sculptor Sean Crampton and studied lettering with Ieuan Rees in materials and skills which he felt were more precise.

“I found I took far more readily to the firmness afforded by stone and glass,” John continued.

After graduating, John trained as a teacher and for several years taught art and design in schools and at Leeds College of Art and was then based in Alnwick, Northumberland. During the building boom of the 1980s John was able to give up his teaching career but his freelance work kept pulling him south. In 1990, rather than going back to Derbyshire, John and his wife settled in Market Rasen.

Here John has continued to work, producing inscriptional lettering, relief carving and gilding on slate, stone and marble. His designs appear sandblasted on glass as well as brush lettered on signboards and carved for plaques, headstones, foundation stones and memorials.

“I always design on paper first. My work is not mass produced but is individually designed and produced by hand. Clients come to me with their own ideas and I help them with inscriptions or quotations and materials and styles to produce the best tribute possible for the person or occasion,” John explained.

“For example, I believe that headstones should have a quality of repose. I prefer natural and British stones and slates. I think about the words and the lettering in an abstract way and then I can create a pattern with them. I want the design to enhance the words and to draw in the reader. Lastly, hand carving gives a nice, deep cut which brings light and shade to an inscription.”

Examples of John’s work can be seen in many churches across the county including St James’ Church, Grimsby where a sandblast glass screen allows light to flood into the nave. As well as dealing directly with the quarries, John can help with the administrative aspects of installing his work and maintaining its appearance.

If you would like to know more about John Shaw’s work, he can be contacted on 01673 844300 or visit his website at www.john-shaw.info

THE PRESTON PALS WAR MEMORIAL
A commission John Shaw is presently undertaking is the Preston Pals War Memorial, which will be sited adjacent to Platform 4 on Preston Railway Station. This group of approximately 250 men were recruited over four days in August 1914. During the battle of Bazentin-le-Petit in 1916, 200 out of the 250 in the battalion were killed. Preston Station was the last familiar landmark of home most of them saw before they were shipped to the front. Preston Pals War Memorial Trust was set up to find out more about the men who enlisted, as most records were lost in the Second World War, and also to collect funds for a memorial to commemorate their sacrifice.

John has designed a slate memorial panel, two metres high and a metre wide to fit the scale of the site. Parts of the lettering, regimental badge and butterfly motif will be finished in gold leaf and full colour.