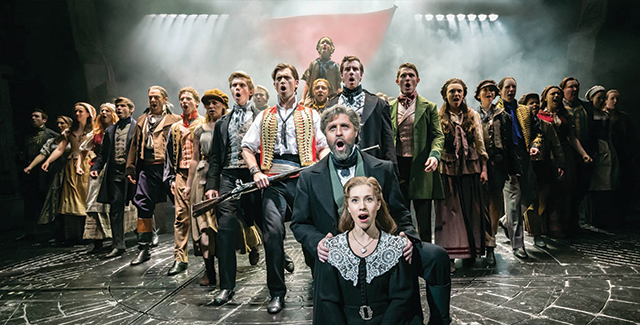 A new star in the family

He’s only thirteen, but Harry Marcus is already upholding a family tradition after a landing a part in primetime TV drama Poldark.
Both the youngster’s parents Jamie and Julie Marcus have acted on TV and appeared in stage shows, while his grandfather was a cabaret singer, and now Harry is following in their footsteps by carving out a successful career for himself in front of the cameras.

Series three of the popular BBC one programme Poldark returned to screens at the beginning of June, with Harry cast as Geoffrey Charles, the nephew of main character Ross Poldark, who is played by Aidan Turner.

“Poldark wasn’t something I’d watched, although I knew about it being on the television, so I wasn’t afraid about going for the audition,” says Harry, a student at Lincoln Minster School.

“When I got the job I went back and watched the first and second series so I could get to grips with the storyline and my character.

“I did the filming for it down in Cornwall and Bristol from last September to February this year.

“It’s such a big show, there are so many people who watch it. It’s taken a bit of time to get some feedback but now it’s out it’s been amazing – everyone on Twitter has been really supportive, it’s been brilliant and I’ve been really humbled by that,” he added.

Harry has been acting professionally for around four years after landing his first part in the musical Priscilla Queen of the Desert alongside Jason Donovan.

From there he has gone on to perform in West End shows including Made in Dagenham (with Gemma Arterton) and Les Misérables and on the big screen he also had a part in the recent remake of Disney’s Beauty and the Beast.

“My Mum and Dad are both actors, and since me and my sister Honey came into the world Dad has edged off the acting and gone into producing theatre, including the local professional pantomimes at Lincoln Drill Hall – so every Christmas I would be there,” explains Harry.

“And obviously with my parents being actors I’ve always been surrounded by it and there in that environment.

“It was my Mum who saw an open audition for Priscilla on Facebook and someone had suggested I should go up for it and I was really grateful to get the opportunity.”

Harry’s own acting idols include Dwayne ‘The Rock’ Johnson – star of the Fast and the Furious franchise – and Spiderman actor Andrew Garfield, whom he was privileged to work alongside recently, for the forthcoming feature film Breathe, directed by Andy Serkis.

The movie also stars Claire Foy and Hugh Bonneville, who Harry was also delighted to meet, and took him to South Africa for filming.

He adds: “It was so nice to meet everyone – they are lovely genuine people and it’s nice to see that the big stars are very down to earth and just like average people.

“I had some lovely scenes with Aidan Turner on Poldark, and it was great hanging out with the cast in general.

“Eleanor Tomlinson (who plays Demelza) was lovely too. Series four is very much up in the air at the moment as I don’t know if I will be in it, it depends on how far the next series jumps forward in time.”

As for the future Harry is keen to continue performing both on screen and stage, while not forgetting the small matter of his school work to keep on top of.

“On the stage you are in front of a whole audience, and the nerves can still kick in, but once you’ve performed and feel you have done a good job, it’s just amazing and you feel really proud of yourself and happy,” says Harry.

“TV takes a bit more time and more time to get feedback too. I would like to continue doing both; they’re so different yet amazing at the same time.

“I have learned while doing jobs. I went to theatre school too, but I’ve really learnt how to act by doing it.

“Of course I have to do tutoring on set too, at least three hours a day. But my school has been lovely, sending work down and my headteacher Mr Wallace has been great by supporting me and letting me have the time off to go on location, and through the whole process generally.”

When he’s not acting and keeping up with his studies Harry is a keen basketball fan and also a member of the choir at Lincoln Cathedral, who have also been very supportive of his work.

However, his greatest fans remain his family who have closely supported him on his rise to stardom. His dad Jamie is no stranger to the world of showbusiness, having appeared in Heartbeat and in shows Aspects of Love and Phantom of the Opera, while his mum Julie acted in Grange Hill and To the Manor Born, as well as touring with The Rocky Horror Show. His younger sister Honey (10) is also creative and an accomplished cellist.

“The last four years have been quite an incredible journey for the whole family,” adds Jamie.

“We are a theatrical family, but we’ve always encouraged our children to do what they love; when Harry is acting and doing these jobs, just the excitement and the life experience the family is having is amazing, to be able to support him in this way is just a small price to pay for us.

“The support that everybody has given him, the film and TV companies, has been incredible.

“He just loves it so much and that’s wonderful to see and we want to give him – and his sister – as many opportunities as we can.

“We are incredibly proud of him.”

You can watch Harry in Poldark on BBC iPlayer or BT TV. To keep up to date with Harry’s news follow his blog on his website www.harrymarcus1.co.uk/home