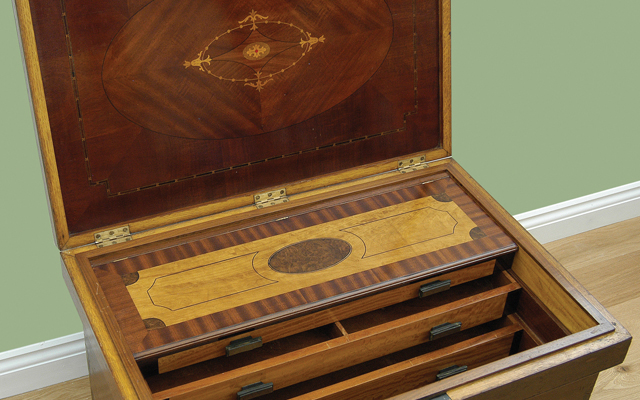 A story of forgotten treasure

As the partner of a local gallery in Branston, Lincoln, I am used to sourcing all manner of art and antiques from across the country, and even worldwide. There is nothing more enjoyable than digging deep to find a hidden treasure, lost over the course of time. In the world of antiques, every so often you come across a rare and extremely interesting item that gradually reveals a story about its heritage.
The gallery purchases items from various sources, including auction rooms, with the view to finding quality items for discerning buyers looking for that ‘something special’. At one auction we came across a large, extremely heavy carpenter’s tool chest, with a brass plaque bearing the name ‘JH Taylor’.

From the outside it didn’t look like anything special, just an old oak chest for keeping tools in, showing the ravages of time and use. Yet on lifting the lid, the interior revealed a myriad of visual contradictions beginning with truly spectacular inlaid decorations of mahogany and satin wood marquetry, with precision made individual drawers and compartments. This was clearly made by a master craftsman who had spent many years learning the crafts of his trade. Having bought the chest and lovingly restored it, we subsequently sold it to a couple from Manchester who wanted it to keep their dining room items in. The joy for us was seeing their evident appreciation of its decorative embellishment and craftsmanship.

Whilst parting with the chest itself, we kept the contents and put them aside without giving too much thought to their value or history. However, we had commented on how perfectly organised they were, with everything in place and divided logically within each compartment. Every layer said an awful lot about the owner – or was it owners? At the very bottom of the chest, neatly ordered, were twenty Victorian wooden planes, a number of chisels and screwdrivers, a leather tobacco case and clay pipe, a spirit level, Junior Scouts belt, timesheets of work done, a notebook, items of jewellery, perhaps from a loved one and a whole host of other items. Here was a story about someone’s life in a box. We believed, by the contents, that this chest was possibly handed down from Taylor’s father, certainly both master craftsmen.

SPECTACULAR INLAID DECORATIONS OF MAHOGANY AND SATIN WOOD MARQUETRY
One of the special items that we discovered in the chest was a nineteenth-century carpenter’s slide rule. Made of boxwood, the rule has a brass joint, a brass cap at the end of one arm, and a brass slide. It is an unusual example of a special-purpose slide rule. Further research on the web revealed that The National Museum of American History and the Museum of Applied Arts & Science in Australia also have copies. It was designed by William Slater Boulton and made by Thomas Bradburn & Sons, in Birmingham UK around 1850.

We contacted the above museums and Peggy Kidwell, curator of mathematics at the National Museum of American History, said: “Carpenter’s rules were by no means uncommon in the nineteenth century, but do not seem to survive in large numbers. On a more intellectual level, carpenter’s rules represented a way for those needing to carry out practical calculations relating to timber to do their work without relying on mental – or written – calculations. They were a special-purpose form of an instrument invented in the seventeenth century that would be commonly used by engineers from the late nineteenth century.”

Through this extraordinary journey of discovery we feel privileged to have been allowed into the world of JH Taylor and his father. Little did they know as they went about their working lives that this box of tools was to become a treasure trove of history. It just goes to prove that if you do your research you will find the true value of objects, often worth more than money. This is why Elysium Gallery has donated the rule to the London Science Museum, which currently does not have this type of carpenter’s rule in its collection.