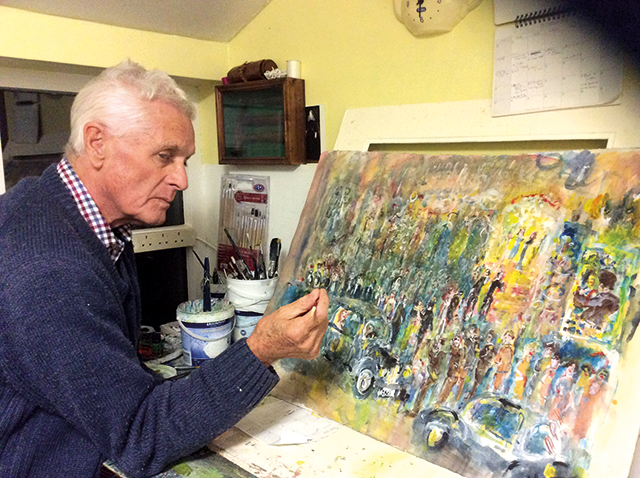 A style of his own

Michael Gibbison’s work can be purchased from The Old House Gallery, Oakham, www.rutlandgallery.com and through the London Mozart Players chamber orchestra at www.londonmozartplayers.com

For artist Michael Gibbison, painting is just like breathing – he simply can’t not do it. Kate Chapman hears how a lifetime’s passion has led to exhibitions. a special residency and a royal encounter.
The 81-year-old great-grandfather has always been passionate about art, painting and drawing from an early age and more recently he has become the artist in residence for the London Mozart Players chamber orchestra.

At the end of last year Michael produced three special paintings to mark the group’s 70th anniversary and was honoured to be a guest at one of its fundraising performances at Buckingham Palace, in London, given in the presence of its patron HRH Prince Edward, the Earl of Wessex.

During the course of the evening he was given the opportunity, along with the orchestra leader, to present one of his birthday paintings to the Prince too.

“It all came about five years ago because my son-in-law’s sister plays in the group – I was asked to do a painting of a cello for her, which she really liked, and that led to other work for the orchestra and its members,” explains Michael. “I must have done about thirty to forty paintings for them since then and last year I did three paintings to mark the 70th anniversary.

“It was wonderful to be asked to Buckingham Palace and to meet the Prince. He was really easy to talk to and very interested in my artwork. It really was quite a night.”

Michael comes from a humble background, growing up one of three siblings, with just his war widow mother raising her young family in Kettering, Northamptonshire.

“My father, like so many, was killed during the war in Palestine. He was in the cavalry regiment of the Royal Scots Guards. Many of our family going back through the generations served in this regiment or others,” recalls Michael, who moved to Deeping St James with wife Glennis in 1991 to be closer to their family.

“I was only 2 when he died. It was very sad and hard for our mum, but for us children I suppose you never missed what you’ve never had.

“As a child I can remember I absolutely loved drawing, painting and anything creative or making things.

“One of my earliest memories, from when I was about 4 years old, was going down to the river bank, picking out some clay and making toys from it. Art seemed to be the only thing that I could do really well.”

Although his creativity was always encouraged, because of the era he grew up in Michael was advised to pick a good, solid trade and he spent his working life as a plumber, both self-employed and contracted.

“I was always very good at DIY and hands on things and art has always remained a big passion for me,” says Michael, “I would have loved to have made it my work, but when I was younger the opportunities that are available now just weren’t around, and although she encouraged me wherever she could, it just wasn’t possible for my mother to support me in those ways, especially when she had three children.

“I kept it as a hobby and used to do some painting most days and whenever I could though, doodling on cigarette packets sometimes.”

Michael’s preferred mediums are watercolour and acrylic paints – both of which are fast drying – something he says was advantageous when he became a father-of-three himself and needed to get his painting done and dried quickly.

He is proud to be completely self-taught, although he was encouraged by Leicestershire artist Les Goodwin, who used to invite him and another painter into his home to work together.

Michael said: “I get my inspiration from everywhere around me and I’ll happily paint anything – people, animals, whatever is there in front of me.

“You have to copy others and their style to learn in the beginning but I just make things up as I go along and sometimes I like to add a little bit of humour to my pieces.

“When I first started out, in the early days you seem to get something good straight away, but as you paint more and more, you find yourself searching for something that’s really good.

“I can paint traditionally, like Turner and Hogarth, but I don’t really like to – that’s not me.

“I’ve created my own style and it’s more primitive, a bit more American rural west I suppose. I’m not comparing myself to Lowry, but there is a similar looseness to my style.

“As far as I’m concerned there’s no wrong or right way to do it; it’s my painting so I can do whatever I like. I have taken commissions in the past but I try not to, as I’m always so worried as to whether people will actually like them or not.

“I just like to paint what I want, and if someone likes it enough to buy it, then all well and good.”

Over the years Michael has exhibited his work in galleries in Leicestershire and Oakham among others as well as selling his paintings online and gifting them to friends and family.

He admits his hobby is like a drug – he cannot stop and nor would he want to.

“Sometimes I paint several times a day. When I leave a piece out to dry I just can’t walk by it without resisting the urge to add something else to it,” he laughs.

“My wife says that even my pyjamas are covered in paint. I have been known to get up in the middle of the night, do a little painting and then go back to bed!

“I just cannot pass by without touching it! For me painting is like a drug; I just cannot help it but I also absolutely love doing it – I just couldn’t imagine not.”