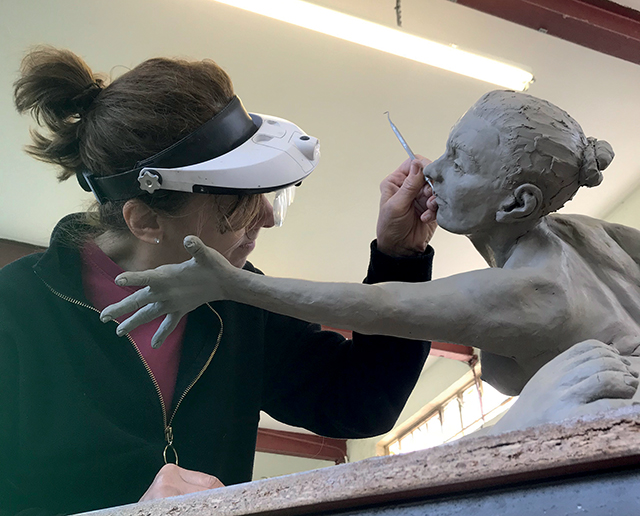 Art which occupies its space

“The clay sculpture has been created, the maquette has been made, it’s all been approved,” says Teresa, who only moved to the county last October, having fallen in love with a windmill in West Lindsey.
“It’s now been moulded and at the foundry. I’ll produce the wax for the lost wax process of bronze. I’ve already done some filming with the garden designer and BBC presenter Juliet Sargeant.”

The multi-award winning maker and elected member of the Royal Society of Sculptors explains the bronze making process: “The mould maker coats the clay in rubber and plaster, essentially creating a shell of two halves, like an Easter egg. Once it’s completely enclosed he separates it and removes the clay, which gets reprocessed. From there we take the moulds and paint in liquid wax up to about 0.5 cm. We put it all together and seal it up.”

At this stage it’s a whole piece, which then has to be cut up into several parts because the kiln will only take up to 50kg. “It’s covered in a ceramic liquid and granules, each drying to a certain temperature. Then the wax is melted and the molten bronze is poured into the vacuum. Once cooled the shell is smashed open revealing the bronze pieces, resembling an autopsy. Now the bits are welded together, the seams ground back and hey presto you’ve got a complete bronze. There are about 11 processes involved and it can go wrong at any point. Each piece can take 12 weeks to produce – from the clay to the bronze.”

The windmill is located on top of a hill, in the middle of nowhere and as Teresa explains, “the wind can be very strong”. Teresa built herself a temporary studio and within two weeks Storm Arwen blew the roof off. “So everything got moved into the first floor of the windmill. To see somebody else working in it again is quite amazing.”

Teresa had looked all over the country and was thrilled to find the historic property. “We’re planning to renovate it and build an extension with a view to living and working there.”

Previous generations of Teresa’s family have lived in Lincolnshire, so when she relocated, she felt quite at home. “My father’s side of the family came from Lincolnshire.” Her father was a maker and from a young age he inspired her. “He allowed me to use his workshop. For my birthday I’d get hammers, saws and chisels. When I wasn’t doing that, I was stitching and sewing, crafting and drawing.”

The theme of Teresa’s work is survival through adversity. “I have experienced a series of life-changing events. The first was my father dying when I was 15, leaving six of us. I was the eldest. That had a profound impact. Several years later my daughter was born with a severe congenital heart defect and nearly died two or three times. Following that I lost a child. Then I had one with autism. I ditched the job and undertook a masters degree at Loughborough University.

“Channeling those negative experiences into being a sculptor became cathartic. I’m fascinated by how much a human being can withstand. For instance, my daughter is 31 and has had three open heart surgeries. She’s still got another one to come and yet never complains. When she was born I was taught not to mollycoddle her, to bring her up strong, to question life and to be as articulate as possible in order to survive. When my dad died, my mum was left with six children and no money. As soon as we were able to, we were working. I’ve had no financial sponsors. I’ve basically clawed my way to the top.”

Being a sculptor is quite physical. “I have lots of energy,” she smiles. “It’s also quite mathematical.

There’s a lot of problem solving. My brain works in a three-dimensional way in terms of when I’m coming up with ideas to represent my intentions. It’s not just about the object but how that object occupies space, how people interact with it in that space.”

“When the idea comes I draw a stickman sketch to get it on paper and then I go straight in with the clay on an armature. I do some research, take some photographs and measurements and get started.”

Prior to this success Teresa, who became a sculptor late in life, was making work and winning awards but not earning an income. “I did that for a period of about 10 years while home schooling my son. The awards get me noticed and are helping me to start making money. In the last few years I’ve had quite a lot of attention on the back of a Best in Show Award I won in 2016 for one of my little mixed media pieces. I was nominated by Richard Deacon CBE, who won the Turner Prize. I met his tutor William Tucker, who advised me to try bronze. I won more awards and had a piece accepted into a public permanent collection in the USA. It escalated, culminating in me being commissioned to create the sculpture for Blue Peter.”

Teresa has several shows this year including FLUX at the Design District – Greenwich Peninsula, Windsor Great Park, Doddington Hall and The Cotswolds. Her Blue Peter sculpture will travel to the new RHS Garden Bridgewater in Manchester. Teresa’s work is in private collections alongside works by Lynn Chadwick and Lorenzo Quinn.

“I’ve made a new piece called What if Icarus,” she reveals. “The story behind it is female ingenuity – often thwarted by the short-sighted.”