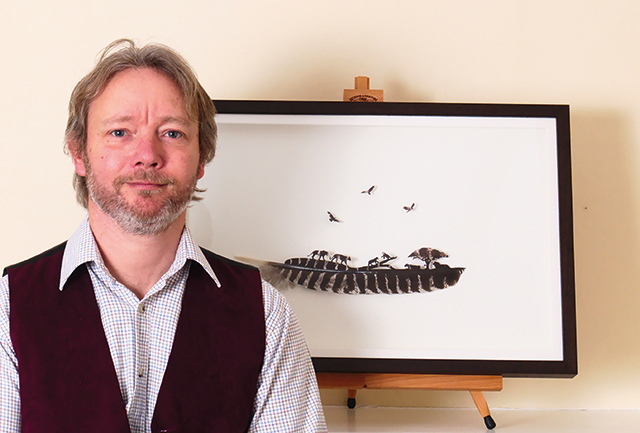 Artistic career plucked from the air

His unique artwork takes its inspiration from the stunning countryside surrounding him, but Nick Orr tells Kate Chapman he can’t believe how quickly his intricate pieces are flying off the shelves.
He first began crafting rural scenes from feathers a couple of years ago – delicately cutting pictures of pheasants, dogs, horses and more into individual plumes – after coming up with the idea thanks to his 11-year-old daughter, who asked him for some feathers from a shoot he’d attended so she could make a collage.

Nick’s artwork has also graced the cover of the NFU’s Poultry magazine and been championed by a Suffolk gallery while commissions come in from all over the UK and beyond.

“It wasn’t something I really set out to do,” says a modest Nick, “It was just something I stumbled into, something I’m not bad at and I’ve found I really enjoy the process of making feather pictures.

“It’s gone from a hobby to a full-time job. When I’m not making them most of my spare time is spent training or working my gun dogs. It’s my absolute passion and one that sees me spending most of the shooting season doing what I love best, picking up with my Labradors.

“It’s this time spent in the countryside, often stood quietly alone for long periods waiting for the drive to start, that allows me to closely observe all that is around me. From the buzzard hovering high in the sky, the fallow doe peeking out of the cover, to the hares running across the field, it is truly inspirational.

“Over the course of a season I must watch thousands of pheasants and partridges take to the sky and they are probably, along with the dogs, the main influences in my work. I don’t think I will ever tire of making pictures with a flying pheasant or two.”

Nick was born and bred in Derbyshire, in a small village just outside Buxton, and after moving down south joined the Navy. For the past twenty years he has been a dog trainer specialising in behavioural work and relocated to South Carlton, just outside Scampton, last year to be closer to family.

“I spend a lot of time shooting and out in the fields and the countryside and I’ve always loved dogs, particularly Labradors,” he adds. “My wife Claire works as a dog groomer, so my behavioural work fits in well, we’re able to bounce ideas off each other, as I work with all kinds of dogs, not just gun dogs.

“As a child I enjoyed arts and crafts at school and I was going to go to art college at one stage, but the Navy called to me more.

“The idea for my artwork came about following some inspiration from the countryside – and my daughter Chloe.

“As I’m a keen shot, we eat a lot of game, and I often end up plucking the pheasants and the partridges. One day, Chloe asked if she could have some feathers for a collage, and it just snowballed from there as I got to thinking that I could do something with them myself.”

Nick’s first attempt involved cutting a silhouette from card and sticking the feather behind it, but it didn’t have the desired impact as the plumes couldn’t be seen.

He then hit on the idea of cutting the silhouette from the feather itself and spent the next three months figuring out how to do it successfully.

The structure of a feather – it has barbules holding it together which act like a natural Velcro – means Nick can painstakingly cut the design into the barbules one by one, from the outside in, without it falling apart.

“I don’t know a great deal about art, but as far as I’m aware there doesn’t seem to be anyone else doing this kind of thing,” he adds. “It takes around three weeks from start to finish to create a picture – there’s a lot of work involved in the design process before I actually start cutting it out, using a massive magnifying head set and the tiniest scalpels.

“I started off with pheasant feathers when I realised I could actually do it, but they are not big enough, so I’ve swapped to bronze turkey feathers as they’re bigger.

“When you think about it, most artists have an infinite canvas to work on; I only have a feather – which when cut halfway is 3.5cm deep and around 20cm long.

“I don’t remove any of the excess until it’s all cut out, so even I don’t know until the last moment how it’s all going to turn out.”

Due to the delicate nature of his work Nick says he still spoils around one in four of the feathers he works on and adds that a whole piece can easily be ruined right at the last moment.

The majority of his work is commissioned and, after a chance meeting with artists and gallery owners Kate and Anthony Denton, he has started exhibiting in their Suffolk venue too.

“Most of my work is commissioned by hunting, shooting and fishing fans – and those subjects are my passions too. I love it,” says Nick.

“I’ve also done a couple of African hunting scenes. At the moment it seems that as soon as I’ve completed a piece, it’s sold, I haven’t had time to build up any stock.

“But I would love to cut some different feathers – maybe one from a golden eagle; that would be fantastic. When I do get the chance to do my own stuff, I like to experiment and do something a little more arty and abstract.

“And even though I’ve done lots of pieces already I still absolutely love it – there’s always that question of what the finished piece will be like, will it be good enough?

“It’s a passion, which combines perfectly with my love of dogs that inspires me to create the pictures I do. And if it hadn’t been for my daughter asking for feathers I wouldn’t have found something that I love so much.”