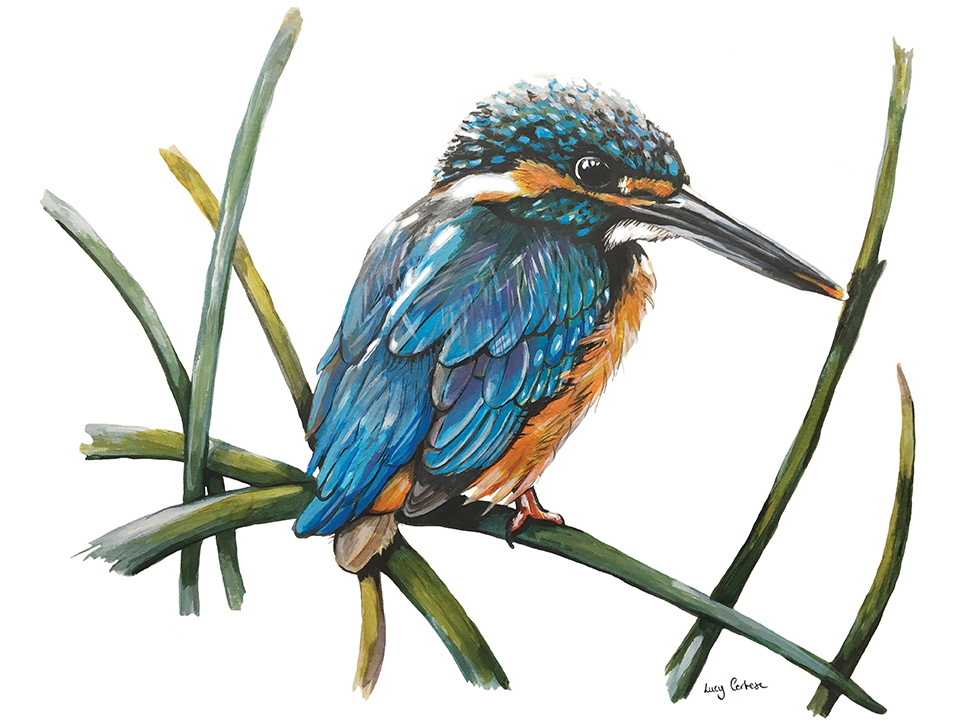 As an artist and stone sculptor, Lucy Cortese is inspired by her passion for animals and nature, which come alive through her unique stone carvings, pencil drawings and watercolours.

As an established artist with an eye for detail and a real talent and desire to capture textures and shapes using different mediums, Lucy has been creating art, “since I was old enough to hold a pencil,” and taking commissions since her early teens.

“Creating is my passion. It stems from my love of animals and the desire to create what I see,” says Lucy, who grew up in rural Rutland and studied Fine Art at Loughborough University before going on to Bath College to study stone carving.

“I always loved drawing at my grandparent’s house and although my grandpa wasn’t particularly good at drawing, he would help me to improve by telling me time and time again ‘to draw what I see’. My love of art has been nurtured by my family.”

Based in her own home studio in Leicestershire, Lucy was a finalist in the David Shepherd Wildlife competition in 2009, where her tree frog watercolour sold at the private viewing at the Mall Galleries in London. She currently exhibits at Lincoln and Stamford’s Little Red Gallery, where her watercolours and sculptures in clay and stone have been on display since 2019.

“One particularly fun piece currently on display is a clay sculpture of a Shetland pony that I saw rolling around on its back with its legs in the air. I really enjoyed sculpting this as it was challenging to capture the moment, especially with wet clay legs to support.”

APPEARING ON TELEVISION
Lucy was one of three artists chosen to appear on BBC TV’s Home is Where the Art Is, which was televised last month. Alongside her current art commissions and creative work, she spent two months creating an idea for a bespoke piece of art. The process involved working to a brief and subsequently presenting her idea on camera, alongside the other two artists.

Time was limited for the creation of the artwork, but Lucy says that this was made even more exhilarating by the knowledge that she would only have time to produce the piece once in that timeframe. There was also the pressure of proving herself by pitching an idea that suited the brief, a process which she says she found exciting and interesting as the other two artists’ work was so different from her own.

“The producers contacted me completely out of the blue and asked if I would like to be involved in the programme,” she explains.

“The piece I created in the programme was my interpretation of a brief I was given by the buyer. It was a piece reflecting their interests, which included adventure, sport, family and big cats, with a surprise element.

“I created a stone sculpture from two blocks of Portland stone. The top stone featured three individual lions’ heads, each one carved into its own corner, the back corner needed to wholly embody them as a family while reflecting their likes and, as a little bit of fun, I carved a small grotesque holding a heart, with the husband and wife’s initials as the piece was a gift from her to him.

“The bottom stone featured mountain silhouettes on all sides with the motto: ‘Always a little further’ ascending towards the peak of the mountain; an allusion to adventure and striving to achieve. To commemorate the husband’s 15 years dedication to charity work, I incorporated the roman numerals XV at the bottom of the two back corners.”

“My workshops are for all ages and abilities,” she explains, “I’ve done workshops in schools, for promoting heritage skills in communities and for anyone who wants to try their hand at something new.”

In her own home studio, Lucy loves to create pencil drawings of wildlife and people that focus on detail and 3D sculptures in stone and clay. She says she finds creating pieces in a monotone coloured medium fascinating “as the amount of pressure or surface texture applied will translate the suggested three-dimensional shape”.

“A lot of my inspiration comes from nature and animals. I like to work from my own photographs, so I often take trips out to photograph wildlife. I have a catalogue of images which I pick and choose from when I am feeling inspired to create a piece on a particular subject.

“I have also drawn inspiration from mythological creatures, especially for stone sculpture.

“I like to reflect what I see, especially when I am commissioned to draw, paint, or sculpt a treasured pet or companion. It’s quite a realistic approach to the subject. I enjoy capturing the expression and focusing on the detail of the subject.”

ANIMALS IN ART
Lucy has always been an animal lover – her first pets were a pair of ducks bought for her by her parents for her fifth birthday.

“During my childhood I had ducks, chickens, rabbits, guinea pigs, sea monkeys, giant African snails (that didn’t actually grow to be a giant), stick insects, fish, lovebirds and even a cockatiel,” she says.

“I’ve also always loved horses and used to ride from a young age, but I’m terribly allergic to them! I was desperate for a dog and finally at the age of 28 I fulfilled my ambition and am now am the very proud owner of a Samoyed puppy called Sasha and a fish called Nemo.”

Lucy first got involved in working with stone through her Saturday job at a memorial masonry business of a family friend and subsequent exposure to sculpture and painting through her Italian heritage during family trips to Italy.

Lucy’s most recent series of work is entitled Urban Birds of New York following her trip to the city, but she says she enjoys all types of commissions from simple house name and number plaques, bookends, benches and headstones, to pet portraits, people portraits, as well as larger clay and stone sculptures.

“One of my favourites pieces was a curved musical love seat in stone, incorporating a quote from Shakespeare ‘If music be the food of love, play on’ with bases carved with the musical stave, clefs and notes from two different types of stone.

“I also enjoyed painting a pet portrait watercolour of a Border Collie and capturing the dog’s character and expression. In pencil and mixed media, I drew a picture featuring cello scrolls, which was particularly close to my heart because I play the cello.”

Lucy says the most challenging piece she has ever created was a pair of matching angel stone sculptures with lettered bases for a grave. “These were 2-3ft tall and had to match exactly. This was quite a difficult task, especially when it comes to working with a natural material, which has natural imperfections. The design incorporated a standing angel, complete with wings, stood on a base and each base had its own inscription all carved out of one block of stone.”

Lucy has also produced illustrations for two books by her sister, Beth Cortese, a children’s author, called The Sharson Chronicles and Buttercup and Her Many-Legged Friends, published by Rowanvale Books.

“The main challenges of being an artist are trying to train my need to create at the right time of day,” says Lucy. “I often get inspiration to create something late at night, which is not always ideal, being able to balance the paperwork and promotional side while creating new work. It’s knowing when to stop. 9am-5pm hours definitely don’t apply here. Music is a big factor in keeping me motivated. Nothing gets the blood pumping and the paint flowing than a bit of Def Leppard or Pink!”