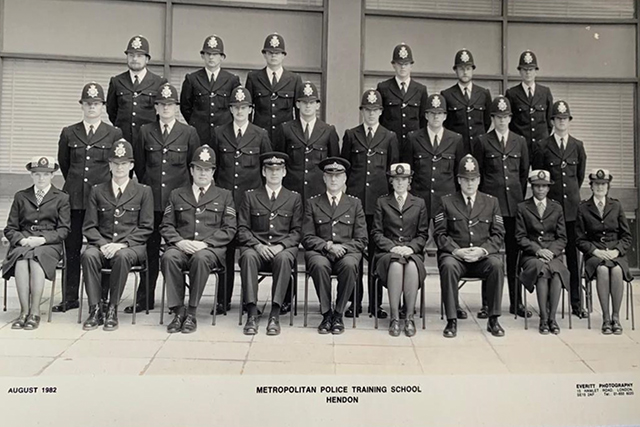 He retired from frontline policing several years ago but, as Kate Chapman reports, that hasn’t stopped former Lincolnshire detective Stuart Gibbon drawing on his 30 years’ experience in the force to keep helping others.

Since his retirement in 2012, Stuart has been giving talks and offering advice to groups and vulnerable people about spotting scams and making sure their homes and online assets are secure through his business GIB Consultancy. He also consults with authors of true crime and crime fiction, advising them on aspects of law and order so they can accurately portray police procedure, as well as writing his own reference guides on the subject.

Stuart – who rose to the rank of Detective Chief Inspector (DCI) with Lincolnshire Police working cases in Grantham, Skegness, Stamford, Bourne and Spalding – has already released two books, The Crime Writer’s Casebook and Being a Detective, while his latest offerings have been described as essential research companions for all fans and writers of fiction crime and true crime.

“I really enjoy writing the books – it seems there’s quite a demand for them as there’s a lot of interest in true crime,” says Stuart, who is based in Sleaford.

“I consult with several authors and help them out on issues around procedure and what happens in certain instances as they want their books to be as realistic as possible.

“I’ve worked with Stephen Wade before, after meeting at a literary festival in Lincoln, and since our previous titles were so popular, we decided we’d do some more.

“These latest books, which are the start of a new series, explore lots of different areas and will be very useful for crime writers as well as those who are interested in watching crime documentaries.”

Stuart, who grew up in Gateshead, says his desire to work in a profession where he could help people stemmed from his childhood when his family home was burgled.

“I wasn’t very old at the time, but I’d been out with my mum for the day and when we got home we found the house had been ransacked,” he recalls, “I could see how it upset my mum and the rest of the family, it was quite a frightening experience. The person responsible was never caught but it had quite an impact on me.

“Even though I wasn’t very old I knew it was wrong, and it put in my mind that whatever I was going to do when I was older, it would be based around helping people and I suppose after watching TV shows too, the policing profession appealed to me.”

As soon as he was able Stuart joined a local volunteer police cadet force where he took part in activities including first aid, swimming, displays and started learning about criminal law.

“When I was 15 or 16 the idea of being a detective still appealed, but unfortunately Northumbria Police weren’t recruiting, so I wrote letters to all the forces in the north down to the midlands, and I don’t really know why, as I wasn’t keen on going to London, but I wrote to the Met too.

“They were the only ones who were recruiting. I was invited down to take part in some tests and was offered a place.”

Stuart spent two years in preliminary training before taking up a place at Hendon, the police training college in London. After passing his exams he was posted to Wembley as a PC, where he spent many happy years learning the ropes of the job. But his desire for detective work remained strong and after passing his exams Stuart moved into the CID in the 1990s. He then relocated to Lincolnshire in 2000, working in a number of the county’s stations both as a uniformed and plainclothes officer.

“I spent around 12 years with Lincolnshire Police, working all over the place, including a stint in headquarters – I covered most of the county and dealt with quite a variety of incidents,” he adds. “I worked on everything from robberies and burglaries to major crime, serious assaults and murder investigations – despite the notion Lincolnshire is a rural, sleepy county, there was certainly a lot going on.

“I was with the major crime unit when my role was regionalised, which meant I was on call across five East Midlands forces, and that’s when after 30 years I decided it was time to retire and let someone else have a go.

“I took a break, but I knew I still had lots more to offer so I set up the consultancy, initially doing security and advice talks across the county to groups like the Women’s Institute.

“Unfortunately, the Covid pandemic has put a stop to these, but I hope to start them up again soon. It’s a sad fact but criminals prey on the most vulnerable people in our society, so if my advice can help just one person or if they pass on the information about a potential scam or something similar to someone else, then that’s got to be a good thing.”

As well as group talks, Stuart also works with the media and has appeared in a number of true crime documentaries himself, commenting on police procedure as well consulting on cases with the local press.
He’s also keen to keep writing more books and hopes his latest offerings, focussing on arrest and burglary, will prove popular.

He said: “Each book in the series concentrates on a specific area, with the first exploring arrest and detention. Stephen has written a section looking at the history of this and how it was dealt with dating back to the 1800s, while I’ve looked at the more contemporary side, covering how things have changed since the 1980s, and the legislation brought in.

“There’s a lot of practical information explaining how the police actually arrest someone and what it entails, what happens afterwards and the processes around being detained, bailed and charged.

“The second, about robbery and burglary, is the same – we’ve got a section looking at the history alongside more contemporary information.

“There’s lots of case studies and practical examples too. I hope people will find them interesting.”