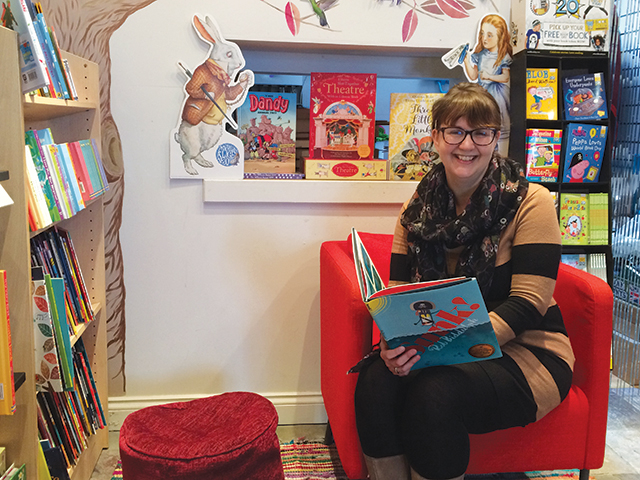 This month Independent Bookshop Week will underline the continuing passion among the nation’s readers for local booksellers with a difference. Lindum Books in Lincoln’s Bailgate is certainly proving itself, with recent recognition in the British Book Awards.

Located just off Castle Square, opposite the White Hart Hotel, the shop is ideally situated for uphill residents as well as the city’s many visitors. Shortly after I arrive on a quiet Wednesday morning, two ladies on a daytrip enter the shop. Announcing that they need to feed their reading habit, they are delighted to find not only that Lindum Books has a shelf stocked with the eye-catching, neat grey covers of the popular Persephone collection but also a wide-ranging secondhand section up the stairs.

Owner Sasha Drennan leaves the customers to explore and since any good bookshop must have a passion for reading at its centre, I ask her to recommend some of her favourite recent reads. Her enthusiastic reviews take in crime mysteries, recent sci-fi and reissues of overlooked mid-twentieth century novels by women writers. Authors with a local connection feature strongly among her picks, including Woodhall Spa born Adrian Tchaikovsky and young adult writer Kerry Drewery, who have both been welcomed for readings and signings.

We take a seat nestled among the children’s books at the back of the shop, where comfortable chairs, a beanbag and rug are arranged for a regular storytime session for little ones. I ask Sasha about the recent announcement of Lindum Books as the Eastern Regional winner in the Best Independent Bookshop category of the British Book Awards.

“It’s the first year I’ve entered. I felt that we are now established and I have something to say about us. I told them about our events, about the Book Club that we do, about the storytimes we do, how we theme our windows, what we did on Shakespeare day, the national book campaigns that we contribute to. I sent the form off, with no expectations. Then you hear nothing, until we heard we were on the regional shortlist, and then that we had won the regional.”

At the time of our meeting, Sasha was looking ahead to the trip to London for the awards ceremony and celebrating along with her fellow booksellers.

“We will probably be at the same table, which will be nice because some of them I will know from going to the Booksellers’ conference every year and some of them I won’t have met before. It’s always nice to get together with booksellers and ‘compare notes’.”

Sasha grew up in Lincoln and after a university course in London, she returned to the city to undertake a Masters degree. This led her into business analysis, project management and service management roles before redundancy prompted a change of direction.

“That was 2013,” she recalls. “I already had a month’s trip to Australia booked, so that gave me a bit of breathing space. I started thinking about it and looking at properties and the practicalities of what putting a bookshop together would be, probably while I was still finishing work.”

A prior knowledge of business practice and development ensured that when it came to market research, Sasha was able to progress her project and find a suitable property in the city.

Sasha explains: “I was originally looking at the old Reader’s Rest building on Steep Hill, that was up for sale but because I hadn’t had a business before, I wasn’t able to get the percentage business mortgage that I needed to buy that.”

The property owner who purchased the Reader’s Rest was, however, able to offer Sasha alternative premises for leasing. Previously a kitchen shop, the current Lindum Books building is nestled among the city’s main historical tourist attractions and a host of other independent boutiques in the Bailgate. The shop has just celebrated its third birthday, having opened to the public in 2014. This despite uncertainty about the future of booksellers over recent years.

“There had been a lot of murmuring about the death of the book trade because there had been a massive fall in the number of independent bookshops over the couple of years previously,” says Sasha.

Sasha runs the shop along with another part-time bookseller, and a third staff member who looks after Saturday trade. Offering much more than just a pleasant environment in which to browse a range of titles and genres for your next read, the shop hosts regular events for all ages and in collaboration with customers, writers and local venues.

A quarterly book club for up to twelve readers gathers for an evening of discussion and refreshment. A monthly, interactive storytime and craft session for pre-schoolers is run with the help of the local Rhubarb Theatre, and is always based around a children’s book that is in stock. These are free and were initially funded by one of the first James Patterson grants.

“They gave us enough to fund it for a year, but it was so successful that I decided to continue with it. It brought a lot of new customers into the shop, who have then continued to use us as their local bookshop,” says Sasha.

This variety of events, and the steady appearance of visitors during the hour I spend with Sasha, is a sure sign of the continuing growth of the shop and its commitment to both readers and writers. Posters on the walls and the shop counter announce forthcoming appearances by popular historical fiction author Karen Maitland, history and heritage expert Tracy Borman – both of whom have strong connections with the city – and going into the summer, crime writers Mark Billingham and John Connolly. Many of these events generate a large turnout and so Lindum Books works together with The Collection museum just down the hill to host these.

“It’s not all about the big names. Big names are great and they bring people in but the smaller events are just as much fun. We love to introduce our customers to local authors and debut authors.”

Leaving Sasha to assist her customers and catch up with familiar faces, I am happy to browse the new titles and the shelves of fiction, both contemporary and classic. My bibliophilia means I am unable to leave without a book in hand and I gladly pick up a recent collection of writings by the late AA Gill. Despite the shop’s relatively small size, the choice and arrangement of the books makes it easy to contemplate carrying off an armful of reading matter. If you are stuck, the Lindum Books staff are on hand to give their recommendations.

“We enjoy what we’re doing. We love what we sell and we know what we sell. We have the space and the time to engage with people, if they want that. And it’s amazing what discussions you can get into in a bookshop,” says Sasha.

The shop also has good relationships with two other independent sellers in the city – The Bookstop Café on Steep Hill, and Unicorn Tree Books in the Lincoln Central Market – which are able to cater to different reader tastes.

“We’re all under the same constraints. We don’t want to take trade from each other, so if we can send people around, it helps,” says Sasha.

“For an independent bookshop there is no ‘standard approach’. That is the beauty of independent bookshops. That’s why being nominated for this award feels really odd. Having got through the early stages and now being in the final, with the possibility of being said to be the Independent Bookshop of the Year, we’re not really in competition, because we’re all different.”

THE HOUSE AT BAKER STREET BY MICHELLE BIRKBY
“Birkby has taken an angle which I do not think has been done before, which is Mrs Hudson and Mary Watson solving crimes. They are very well written and the mysteries are good. I didn’t guess them, which is unusual. They are also set cleverly on the Sherlock Holmes timeline, so you do also see Sherlock and Dr Watson along the way. They are great fun.”

CHILDREN OF TIME BY ADRIAN TCHAIKOVSKY
“Originally a local boy, from Woodhall Spa. He was the winner last year of the Arthur C Clarke Award for his sci-fi novel Children of Time which was mindblowing. It is about what we are doing to the planet.”

CELL 7 BY KERRY DREWERY
“Another county author. She has written young adult novels and this is the first one to hit the public consciousness, probably the best one I’ve read since The Hunger Games. It’s quite fresh in its view, and is set in Britain, rather than America, which is great.”