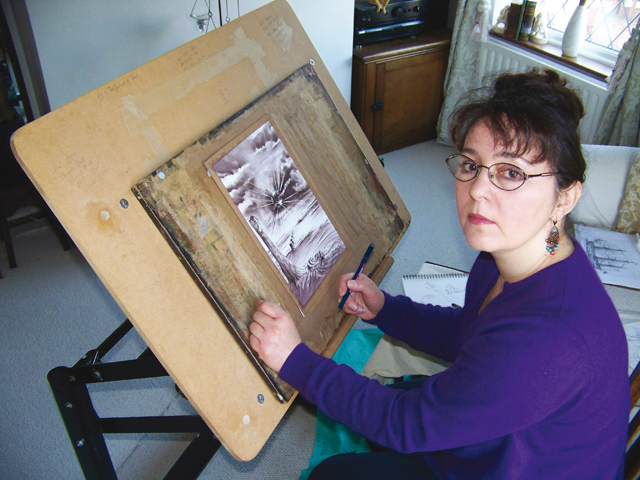 In an age of conceptual artists and installation art, when pickled sharks or unmade beds can sell to collectors for absurd prices, Karen Devereux creates her artwork the old-fashioned way – with skill, care and intelligence.
The Tetney based artist’s pen-and-ink drawings hearken back to the late nineteenth and early twentieth century Golden Age of Illustration; a time when artistic giants such as Arthur Rackham, Aubrey Beardsley and John Tenniel created astonishingly rich work which, thanks to advances in print technology, could be viewed by a mass audience in high quality, and relatively inexpensive, reproductions.

Karen views her work as belonging to that tradition, and her painstaking line certainly follows in those classic footsteps as far as technique is concerned. However, her ideas and style are very much her own.

She is fascinated by folklore, old churches and the quaint rural tales and gently rolling landscape of Lincolnshire, all of which feature prominently in her gorgeously lush yet subtly unsettling renderings. Asked to define the essence of her work, Karen quoted a couple of lines from Wordsworth’s Prelude:

‘Fair seed-time had my soul, and I grew up
Fostered alike by beauty and by fear.’

Beauty and fear form a synergistic relationship in her creative vision. The myth-sensitive artist seems to have tapped into the rich, deep well of folklore to be found in the collective unconscious.

Whether illustrating the Haxey Hood Fool; a woodland nature spirit hidden in the undergrowth; a stretch of lonely, haunted coastline; sombrely brooding skies; intricate and curious details of church architecture; or the poignant isolation of an abandoned, tumbledown cottage, Karen’s approach demonstrates a painstaking attention to detail and a highly personal, moody integrity.

Even her landscapes have an intense, elemental quality. “I don’t do pretty nature!” she told me emphatically.

Karen studied at art college for a year, but is largely self-taught. She has experimented with colour work but prefers the black-and-white textures of pen-and-ink, a medium not widely used these days, and which she feels presents a greater challenge to her abilities.

“There’s no hiding place with line drawing,” she said with a wry smile. “You can’t fake it. It’s like walking a tightrope. Get it wrong and you just have to start again.” Consequently, she has to plan in great detail exactly what she intends to do before even touching pen to paper. “You can have happy accidents in art, but you can’t rely on them happening.”

Karen’s interest in folklore can be traced back to her childhood, when she was often laid up at home with bronchitis. There were always plenty of books in the house and her father, a talented artist in his own right, would draw pictures for her inspired by the fairytales they would read together. Being an only child, she would also amuse herself by making up her own stories.

As she grew up in a seafaring family, superstition played a part in everyday life. “We never brought greenery into the house, except at Christmas, or threw bread onto the fire, and at the turn of the New Year the darkest-haired person in the house, which would always be me, would bring in the coal. These things were simply considered perfectly normal,” she said with a chuckle.

As she became older, Karen’s interest in folklore and superstition grew. She began to research the subject, and found it to be a tremendous source of inspiration. When added to her fascination with the Lincolnshire landscape and love of old buildings, an artistic vision was formed which she continues to refine.

One recent project was a series of drawings depicting the life and works of John Harrison, the inventor of the marine chronometer, who lived much of his life in Barrow-upon-Humber, Lincolnshire.

This versatile artist has also made her first foray into children’s book illustration. ‘The Little Lost Engine’ features nine of her line drawings and is available from Cleethorpes Coast Light Railway.

Karen’s work is increasingly in demand and commissions are taking up more of her time. Among her patrons are the former astronomer royal, Sir Arnold Wolfendale, FRS and internationally renowned sculptor, Howard Boyd. This interest is set to rise to a higher level when an exhibition of her work opens this month. Entitled, entirely appropriately, ’Divine Lincolnshire’, this showcase of her finest and most evocative work runs from 6th – 21st April in the Chapter House, Lincoln Cathedral.

In these days of superficial and disposable ‘art’, Karen Devereux is producing work of lasting merit. Inspired as she is by the timeless genius of her artistic heroes such as Gustave Dore and Mervyn Peake, this rare creative talent is surely destined for lasting success.

More information about Karen’s work can be found at: www.lkdevereux.co.uk