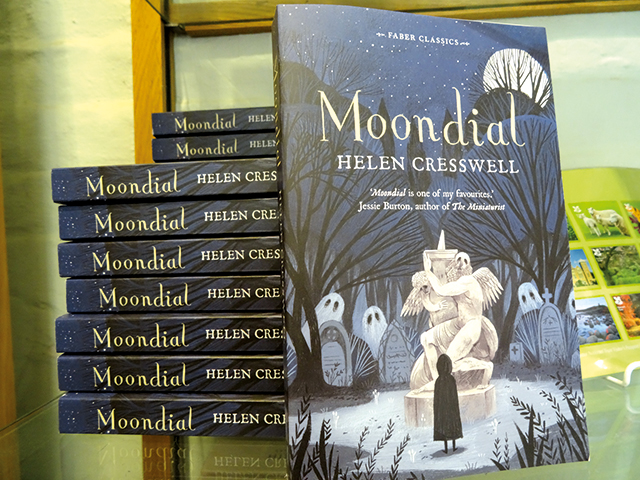 Moondial, a children’s book written by Helen Cresswell, was jointly published in October 1987 by Faber and Faber and the National Trust. The story is set in 1985 Belton village and at Belton House.
It features children from three different time periods – Minty of the 1980s, Tom from the 1860s and Sarah from the 1770s. Moondial, a ‘time shift within a time shift’ centres around the sundial in the gardens of Belton House. As 2017 marks the thirtieth anniversary of Moondial, an exhibition loaned by the Cresswell family has been on show in Belton House’s library.

Helen Cresswell, a BAFTA award winning children’s author, was passionate about developing the imagination and creativity of youngsters. She travelled all over the UK visiting schools to share her belief in the power of reading. In 1984 she approached the Educational Advisor for the National Trust to suggest that imaginative stories set in their properties could raise children’s interest in them.

In her autobiography, Helen wrote ‘I played with words as other children play with Lego’. Her play with words began with poetry at age 6, later producing around 100 children’s stories including Moondial. After becoming a teacher, she returned to writing in 1963. Helen wrote early in the morning, with a pot of tea beside her. She would sit on the floor and write in a large plain book, with ‘real pens and real ink’. When writing Moondial, as with other timeless fantasies, she used a white pen with sepia ink. After writing between 500 and 3,000 words, she would then type up her work, while it was fresh in her mind. Helen never edited the content once it was written.

In looking for a National Trust property as the inspiration for a story, Helen needed to have a ‘feeling’ about a place. Helen already knew of Belton House, as it was only an hour away from her home in Nottinghamshire and the family had visited the village when her husband played cricket on the green. When Helen visited the house she had several strange experiences. Her daughter Caroline Rowe remembers walking through the churchyard with her mother with both of them feeling a blast of cold air as they turned the corner of the church tower. In one of the bedrooms at Belton House, Helen’s blood went cold and she nearly fainted, feeling there was something unpleasant about the room which involved a little girl. She was upset by this for several weeks but Helen knew she had found her story. When Helen first saw the sundial in the Dutch garden, with the two wrestling figures of Cronos (Time) and Eros (Love), she felt this was going to be central to the book. She researched sundials at the British Horological Society library near Newark, and used some of the inscriptions she found in her book.

Belton House was built in the 1680s for the Brownlow family. The Brownlow and Cust families owned the house until 1984 when the National Trust took ownership. The house is surrounded by formal gardens, pleasure gardens and parkland. Sir John Brownlow, Viscount Tyrconnel, was a politician who represented Grantham and Lincolnshire. He inherited the estate in 1721 and brought the sundial to Belton House soon after. The sundial is made of limestone and was carved by Caius Gabriel Cibber, a famous sculptor at the time. This year the National Trust’s fundraising raffle at Belton House aimed to raise £10,000 to repair the base of the sundial. Visitors and the National Trust have contributed to this funding and the sundial base is now repaired. Today Belton House is a very popular family destination throughout the year.

A legacy of Helen’s book is the Moondial Trail which she worked on with the Learning and Community officer at Belton House. The trail begins in the west courtyard, going through the entrance into the garden. School parties are encouraged to use their senses along the trail. Standing on the north terrace the path to the sundial lies ahead. Going through the church gate the trail reaches the icy corner of the tower and Tom’s headstone, before going onto the Orangery and the fountain in the pool of the Italian garden. This trail helps children experience the garden as the author and Minty did.

I spoke to one school child who went on the ‘Below stairs’ tour and experienced life as a kitchen boy. He dressed up as a servant polishing the silver in the kitchen which was used as part of the filming of the television series. He learnt that all the kitchen boys were called Tom. Tom in Moondial is the kitchen boy from the 1860s. Connecting the house to the kitchen is a tunnel with a rail for moving food to the dining room. When the kitchen boys were in the tunnel, they had to whistle or hum to stop them eating anything on the way.

The BBC made a children’s television programme of Moondial with Helen Cresswell writing the script. Her method had been to write the book first and to keep the television script faithful to the book. The six episodes were filmed at Belton House and village, with local children taking part. The series was broadcast from February to March 1988 and was repeated in 1990. A DVD of the series can still be obtained.

The illustrator of Moondial, P J Lynch, was a young man who had recently left Brighton Art College and was illustrating book covers for Faber when he was given Moondial to read. He told me that once he had read the book, he was excited about illustrating it. There are around twelve line drawings which are evocative of the mood of the story and add an air of mystery to the book. P J Lynch’s front cover cleverly captures several elements of the book, including the Halloween masks taken from the faces on the urns in the garden and the cloaked figure of Sarah. He was particularly pleased with the front cover which is still used by Faber.
Helen’s daughter, Caroline Rowe contacted Belton House in January 2017 and offered to lend some exhibits from her mother’s collection linked to the Moondial for the thirtieth anniversary. The exhibits are on display until November in the library, a fitting setting for an author who loved books. The exhibition includes the original handwritten manuscript of Moondial, first editions of the books and the original handwritten script for the television series. There are also photographs of Helen Cresswell and filming at the house. During August Caroline visited Belton House to see the display. She was delighted to see the exhibits being viewed and to see two Moondial books being purchased in the gift shop.

In Moondial Helen Cresswell had hoped to raise children’s awareness and interest in National Trust properties. The process had begun with her contact with the National Trust in 1984, followed by her visits to Belton House and the television filming. The publication of the books in 1987, plus the television programmes widened the numbers of children discovering Moondial. This certainly has proved to be very successful for Belton House, with many families and school parties visiting every year. When I visited in August the house and grounds were alive with families enjoying the adventure playground, pond dipping in the mirror pond, playing football and cycling. Helen Cresswell was not only a successful author but a true advocate for children and the National Trust.