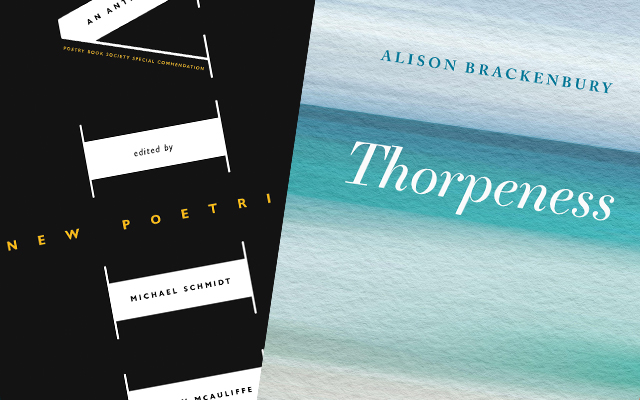 There are no recipes for writing great poetry. There are verse forms, devices, rhyme schemes and allusions that might inspire or challenge – but no secret ingredient that can be passed down. But can a recipe become a poem? Alison Brackenbury believes so.

A central poem in her eleventh collection Thorpeness (recently published by Carcanet) recalls her grandmother, Dot, a Lincolnshire shepherd’s wife and once a professional cook. It begins with ‘Aunt Margaret’s Pudding’, taken from Dot’s recipe book. In this way Brackenbury shows how food can evoke characters and times past. ‘Dot took for granted custard seas, / in which all puddings swam –’ we learn. Of samphire, she writes:

My grandmother could cook it, for
she grew up by that dangerous shore
where the sea skulked without a wall.

Brackenbury, who now lives in Gloucestershire, is deeply connected with the county where she grew up. Born into a family of domestic servants and farm workers, she depicts everyday labourers and the details of the rural environment with fondness, but also an awareness of what is transitory.

Her poetry is moved by the seasons and it records both subtle and stark changes in the environment. Likewise it reflects precarity and hardship – how people manage – which will resonate all the more with readers in our own difficult times:

Often there is a scarcity of words in the poems, many just four lines – but a little goes a long way, as in ‘Packing the Papers’:

It seems to me for the first time, sadly,
they have all gone, the ones who could tell.
Our obituaries, if any, I note gladly,
must come from those who never knew us well.

The same word can be repurposed too. Captivated by William Anders’s photograph Earthrise, each line of ‘Apollo, 1968’ ends in ‘dark’. The final line ‘I never dreamed that we would reach such dark’ might be read as simultaneously a celebration of that voyage into the vastness of space and a lament for the ways in which the planet’s ecosystem has changed catastrophically since then.

Parallel to this is a stoical attitude to death, and sometimes a dark humour too. ‘The Lincolnshire Chronicle’ describes an habitual funeral-goer in the family, eager for gossip:

You ticked them off on fingers, rapt,
as my bored father’s best shoes tapped,
then gazed into the Chronicle
which sang you each fresh funeral.

That which is lost or buried manages to resurface somehow. Bits of history are reawakened in the mind, or rediscovered on a lockdown walk, as described in ‘Willow Pattern’, which Brackenbury was moved to write by coming across oyster shells and bits of smashed pottery (‘….one white scrap whose two blue birds, / smudged lovers, soar unbroken.’)

Lincolnshire folklorist Ethel Rudkin also reappears, alongside more famous writers of the past – Shakespeare, Dickens (whose wife Catherine, we learn, also wrote a book of meal plans) and Edward Thomas. Details from history and personal acquaintance sit alongside magical meetings. Handel and Hendrix, London neighbours who never knew one another, are brought together through imagination in Brackenbury’s ‘Purple Haze’.

Thorpeness itself is for the poet a place in the imagination only. Brackenbury had never visited it when she wrote ‘Shingle’, the final poem in the collection, but always meant to go there:

Will I get to Thorpeness?
Well, not today
since my feet clash the beach
the other way.

Poetry is found, and finds us in unexpected ways.

Another Lincolnshire writer, Nell Prince, whose poems have been collected in the latest edition of Carcanet’s New Poetries series was inspired as a teenager by John Donne’s ‘The Sun Rising’, since when, she says, she has often used ‘conceits’ – but is just as inspired by the sensuous as by formal technique and objectivity.

One is struck immediately by the energy and ingenuity in the face of decay, of dead forms, that comes across in her writing – the subjects often showing an interest in the gothic and gloomy. It is there in the first lines encountered in New Poetries VIII, where ‘something ivy is at work’ in a cemetery. And in the sense of freedom she ascribes to falling leaves, in ‘Frivolities’ (‘all ease / and unforced flight’). Poetic inspiration is found too in the name of insect species (not moths but ‘homeosoma nimbella, / tyria jacobaeae, / thalera fimbrialis’). Ragwort brings to mind jazz – the ‘go-go gold of sax’ – and represents life in the midst of destruction. During wartime, we learn, it sprouted in bomb craters: ‘Ragwort opts, despite / everything, to come through’. There is descent and some way of ascension.

Playing with perspective and expectations in grammar, sound and imagery, her work invites repeated reading (and hearing). One hopes a first collection of her own is not far off.

Just as there is a remarkable attention to sound in Prince’s poems, music is a recurring subject. A body becomes a guitar (or a guitar a body) in ‘Plectrum My Ribs’:

Go on. The penny’s your
pick. So pluck me a song.
Stab at the empty. Tune
and strum my obsolete ribs.

‘The Record Feels the Needle’ is even reminiscent of a song, ‘Spin the Black Circle’ by the US rock band Pearl Jam – both play on the ambiguity of the subject, both pay tribute to the inanimate objects that can give us most life.

Her expansive sense of perception is wonderfully displayed in ‘The Syrup’s in the Sound’, where stars are seen at night ‘where the leaves had been’ (these being dead maple leaves, which she describes transforming through all that the weather can bring down on them) – ‘From so much massed loss to these / I turned my thoughts –’

The rush of words and ideas is intoxicating. In ‘I’ve Drunk the Malmsy’, the tipsy, drifting speaker cannot put their finger on what it is that is giving the drink its particular effect: ‘…perhaps / a special silt or stone / got in and made it have this / deadly, druggy nose.’ Curiosity and not knowing, wondering and wandering, bring their own joy.

As a way of framing this poetry of drifting and disruption, there is a wonderful symmetry to the first and last of Prince’s contributions to New Poetries VIII. ‘Daft Cemetery’ and ‘Meanwhile We Dig’ both find their speakers in the realm of the dead and quietly, triumphantly, finding a way through.

‘Words chip into silence’ where the gravestones are – but we are told, ‘It doesn’t give’. In the end, it is love that won’t give – ‘Budge? No.’ But still there is a desire to find a way forward: ‘…dig, dig, dig / And never stop’, Prince writes, of tunnelling into the ground before returning again.

These are poems that often contemplate despair but are nevertheless full of determination, matters unfolding, communication persisting (for now) through frustrating glitches – this is also conveyed in use of enjambment: tension and potential are embraced.

Prince admits she pinched a title from the film The Great Escape, then shows a morbid glee in describing putrefaction as a type of consolation (‘at least, / communal rot’) – but there is a deeply moving quality to these poems to savour.

Just as there are no recipes for great poetry, there are no algorithms either. The contemporary poet is, like all of us, faced with technologies that attempt to steer our attention, to limit our taste, to narrow the repertoire. As Prince says in her author’s note, ‘the fool and the poet cannot be data-gathered or outwitted’ this way. I can think of no better recommendation lately, for turning to poetry as a way of enhancing screen-dulled lives, than Nell Prince’s illuminating lines.

All titles published by Carcanet, available from carcanet.co.uk