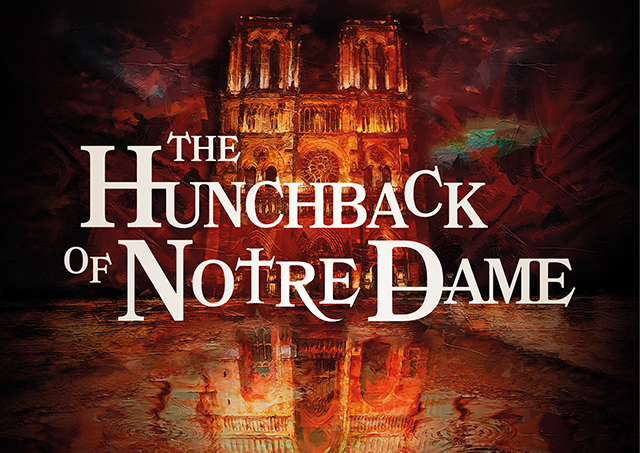 Ben and I met in the Cathedral Café, which gave me a moment to admire the Dean’s Eye rose window as I crossed the garden path to the entrance – and how fitting that one of the first things Ben mentioned was a replica stained-glass window which will be a stunning prop for some of the most dramatic scenes in the production.

The show will not need much in the way of scenery as the assets and architecture of the Cathedral are naturally hugely impressive. The Cathedral organ willl form a stage backdrop, the Cathedral bells will have their own starring moments and production values will be pushed with the use of projection mapping across the medieval stonework.

I suppose we all have our differing perceptions of Victor Hugo’s French gothic story, probably depending on age. The novel is an epic survey of all life which the great Paris Cathedral witnessed; parallels are easy to draw considering the thousand-year history of our own Lincoln Cathedral. The title will always bring to my mind’s eye memories of Charles Laughton playing Quasimodo in the 1939 film. For younger audiences, the 1996 Disney animated musical is memorable as one of the studio’s darkest storylines.

The theatre adaptation, a darker version still, was written in 1999 but Ben explained that it was not until 2020 that limited rights became available. “I had been writing to Disney, on and off, since 2011 and they always responded that a professional show might happen. It did, but off Broadway and Lincoln will be amongst the first few productions in the UK so far.”

Starring Lincoln Theatre Company continues to be community-based, with Ben’s drive for inclusivity and participation a key motivation behind each production.

“When we opened auditions in May 2021, the call went out once again for anyone who wanted to be part of the cast or chorus to come forward. It is important to me to prove that you can take risks and stage theatre of this quality with participants drawn from the city and county, and if you keep coming to rehearsals you will be in the shows. “

Ben has said in the past that his ultimate goal is to have a show with more participants on stage than members of the audience. That hasn’t quite happened yet but with a cast of 150 and choir of 50, this is the biggest so far. Casting for the lead roles took place in December and the working relationship the company has built with students and staff from the University of Lincoln is proving to be mutually beneficial.

André Buhagiar, a Maltese exchange student at the university will play Quasimodo. Esmeralda will be played by Indrija Kustov, who is studying film at Nottingham Trent, while Lincoln resident Ben Good will play Captain Phoebus. Ben, who works for OpenReach, came along to the initial casting call to encourage his daughter’s participation and now finds himself in a lead role. Tim Marks and Helen Evans will play King and Queen of the Gypsies and are narrators during the performance. Ben has taken the challenge of not only directing but also playing Frollo, the Archdeacon, which he described as a “wonderfully complex role”.

The challenging themes which the storyline raises and the incredible music of this production, under the direction of James Fox, promise to deliver an experience which will be moving and thought provoking for the audience.

“Disability is the stigma which isolated Quasimodo in the bell tower in the first place,” said Ben, “but we have chosen to portray this through exo-skeletal illustration on the costume. Deformity was seen as a punishment from God or the result of witchcraft, so complex prejudices are in play with the crowd and their behaviour switches quickly from celebration to aggression.

“There is also prejudice against race, the ‘otherness’ of Esmeralda, who is attacked by the mob, and her behaviour as a woman creates tensions in this sophisticatedly written version.”

Starring Lincoln Theatre Company do not get the same luxury as professional groups of rehearsing in the theatre but rather smaller groups hone their performance before they are gradually brought together for the couple of technical and dress rehearsals which will be possible in the Cathedral once the staging is in place in mid-May. The movement director is Kirsty Russell, who is also Programme Leader, Dance at the University of Lincoln; while Michael Hoyle, of the Technical Theatre and Stage Management department at the university is technical director.

“My ambition is always that the audience come away feeling that they have seen a show which could be in the West End, but instead they are experiencing it in Lincoln, for the benefit of the Cathedral and to feel proud that the city and its community can pull off this achievement. It is the quality of the building and its longevity which resonates so much with this particular story; that it, like Notre Dame, is greater than all of us and the moment.”

While Ben pours all his immediate energy into this production, we did end our chat by talking about a future project, only a passing thought at present, which might feature the city’s own epic moments being captured in a piece of theatre. It might be a case of watch this space but meanwhile be sure to secure your tickets for The Hunchback of Notre Dame.

The show runs from 23rd May to 4th June at Lincoln Cathedral. Tickets available online at www.lincolncathedral.com