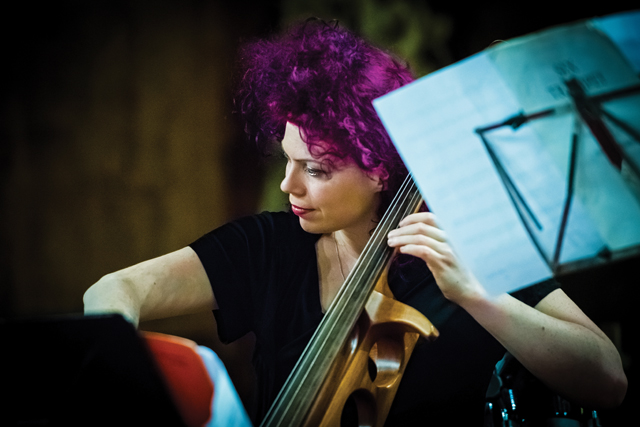 Determined to share her passion for music with the world, Gabriella Swallow is one of the most exciting and versatile cellists of her generation.

The thirty-three-year-old, who grew up in Spalding, studied at The Royal College of Music with Jérôme Pernoo, and has an impressive resume, boasting collaborations with classical and contemporary artists from Nigel Kennedy, Charlotte Church and Sade to Skunk Anansie.

Gabriella is also a passionate broadcaster and arts commentator, and a much sought after session artist. She has appeared on numerous film and television scores including Downton Abbey and Call the Midwife.

Earlier last year the eclectic performer launched her first classical club night under her own name – Gabriella Swallow and Her Urban Family – at The Forge in Camden.

“I just love all types of music, everything opera, jazz and pop. Contemporary music is just as important,” says Gabriella, who made her South Bank debut with the London Sinfonietta in the world premiere of About Water by
Mark-Anthony Turnage.

“I got opportunities very young to work with artists like Sade and Charlotte Church and I was playing music I was passionate about, which showed it was possible to have a relationship with both worlds.

“Yes, you’ve got Mozart and Bach, but what I really cared about was, ‘Was it good?’ I didn’t care who wrote it.”

Gabriella, who was born in Belfast, moved to Lincolnshire where her father’s family were from, when her parents opened a dental practice in Spalding in 1984.

Encouraged by her mother Barbara – an amateur harpsichord player – she started piano lessons when she was four, before joining a recorder club at Ayscoughfee Hall School.

“I was given a plastic recorder when I was about seven and I remember learning to play The Snowman,” she recalls.

“I’d take it everywhere – even to bed. I just wanted to get better and onto the next page of my book for my lesson. It was quite unusual, as it came from me, that I wanted to improve.

“My parents had contacts with baroque music and musicians from Holland, where a lot of kids who play the recorder start playing string instruments too.”

Inspired by legendary cellist Jacqueline du Pré, who showed the world it was feasible for women to play, Gabriella decided she would take on the biggest string instrument possible. Although, unbeknown to her, a double bass wouldn’t fit in her parents’ car, so she was given a cello instead.

After a year under the tutelage of Glenis Malkin she was offered a scholarship to Chetham’s School of Music in Manchester – the UK’s largest, specialist, independent music school.

“It was interesting, especially as a lot of the other young students, their parents were musicians – mine were interested in music, but not really musicians,” says Gabriella.

“I went off for an interview without knowing what to expect. I went as a recorder player but ended up playing the cello to show them what I could do. It was three hours away but I loved it. They only give out two places a year and I found out a week later I’d got it and was delighted. So I left home at the age of nine.”

The school has recently been caught up in abuse allegations, but Gabriella, who was a pupil after this period, is grateful for the opportunities she received and says her education and upbringing have made her the person she is today.

“Looking back I was under a huge amount of pressure, I didn’t get to see my sister or my parents but you just have to get on with it.

“With what’s happened, it does change your attitude – but all my adult decisions come from my upbringing in that school. I have mixed feelings, but I’ve had opportunities I never would have had otherwise, had I stayed in Lincolnshire.”

After nine years at Chetham’s, Gabriella joined the Royal College of Music, specialising in cello and composition, where she collaborated with many of today’s leading composers. However, things didn’t go to plan when her teacher insisted she return to basics and banned her from playing in the orchestra.

“It was very difficult being told to start all over again and it was at that point I started answering band requests on sites like the musical equivalent of Gumtree,” she explains.

“I was getting in touch with indie, pop and jazz artists who all like to have a string player. It turned out to be quite an exciting time as I worked with many musicians who couldn’t even read music – I had to sing it to them. The process also taught me how studios work.”

Gabriella was ninetten when she first played at Ronnie Scott’s legendary jazz club in London’s Soho, where her love of crossing genres and blends enabled her to create a niche for herself.

Her desire to develop an individual voice was further encouraged by her new teacher Jérôme Pernoo.

“Most people either go on to play in an orchestra or become a music teacher – I wanted to create my own life and work, so it was a mixed blessing,” says Gabriella.

“Jérôme Pernoo really believed in me – he said it was okay to have an individual voice. So I went from not being allowed to play in the orchestra to winning the prestigious Tagore Gold Medal, which gave me many more opportunities.”

Gabriella’s world changed dramatically again when she met and married composer Mark-Anthony Turnage. Her career took a back seat while she supported his work and became a mother twice over. The marriage didn’t last, but after a difficult period of readjustment she began forging a career for herself once more.

In 2010 she co-founded the duo The G Project with percussionist Genevieve Wilkins and they regularly perform together in the UK and Europe, while she also continues her collaborations with Gwilym Simcock’s Quartet.

“I started off having not much work but I wanted to make something of my own life and it eventually started coming,” she says.

“In just a couple of years I could see how my life had changed and I wanted to create my own big project. That’s where Gabriella Swallow and Her Urban Family came about – it’s the people who have been around and helped me during those past couple of years. My circle is full of musicians and they have given me amazing support.

“I enjoy bringing music to a very different audience. But it’s about more than just the music – it’s very much a whole show, just as an actor puts on.

“I don’t take myself too seriously – I love getting dressed up and getting into character.”

And what of the future? Gabriella, who plays a cello by Charles Harris Senior built in 1820 and an electric version by Starfish Designs, has performed at numerous festivals in a bid to reach a wider audience and hopes to start recording more of her own work.

“I love collaborating with Judith Owen and working with others, but recording more of my own project, focusing on the Urban Family would be very nice, or maybe with artists like Laura Mvula.

“I just believe in the music being good and at the moment I’m having fun with it, working with like-minded people.”