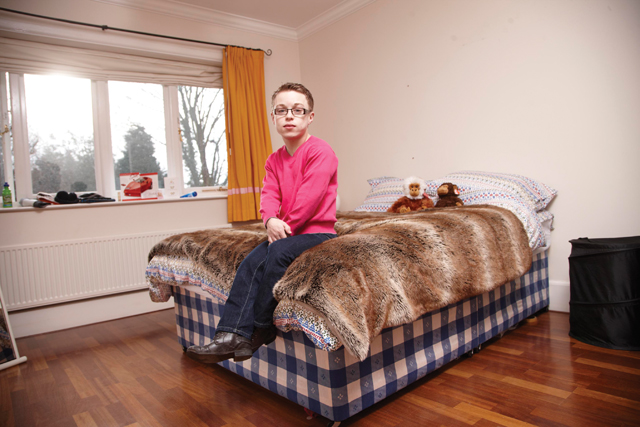 No part is too big for this ambitious actor and performer
The word ‘dwarf’ is not one that Lincoln actor Craig Garner ever refers to when mentioning his small stature. Currently a star of the Channel 4 documentary Seven Dwarves, Craig is small because he has the very rare Moore-Federmann syndrome, which affects only a handful of people in the world.

Craig was born and has lived all his life in Lincoln and it was his ambition from a very young age to be an actor and performer. St Francis School nurtured his talent in shows and school productions, while the Ovation Theatre School in Cherry Willingham gave him experience of appearing on stage, singing and dancing. Craig went on to study for a National Diploma in Performing Arts at Lincoln College and was signed by his first agent after she was in the audience of his final year musical production of ‘Hair’.

“So many people locally have helped me to build my CV,” explained Craig. “Jamie Marcus was my tutor at college and he auditioned me for the part in my first professional pantomime. Ian Marsden called me the following year to play the part of the child murderer in a touring production of Daphne Du Maurier’s ‘Don’t Look Now’.” This was the first of two tours for Craig with Ian Dickens Productions starring Peter Amory, Rula Lenska and Nicola Bryant.
Wise beyond his twenty-six years, Craig has also built a career in commercials and promotional appearances. These have included commercials for Sony Playstation, Weetabix, Daily Mail and Nissan and to date his periods of ‘resting’ have been relatively rare.

“I knew that I wanted to find more challenging parts and my first major movie was working as Harry Potter’s body double in the two Deathly Hallows films.” Craig’s small stature provided the contrast in height in scenes acted between Harry Potter and Hagrid, the giant.

While Craig can understand that some small people are happy to earn their living from the qualification of their stature alone, as a trained actor, who is always developing his skills and range, it can be very frustrating.

He moved to Willow Management, based in Peterborough, who specialise in securing work for small people. They helped him to land parts which required a much broader repertoire including singing and dancing. To date Craig has appeared in more than seven pantomimes including the role of Prof in ‘Snow White and the Seven Dwarfs’ in Woking in 2010/11, starring Gareth Gates and Claire Sweeney which is the backdrop to the television documentary.

The Garden Productions Company, who are responsible for the TV series, filmed fly-on-the-wall footage for the seven-week run of the show in the house they all shared. Subsequently they filmed each Seven Dwarves cast member to secure footage for their own individually focused episode of the series. Craig’s was shown as episode six, in the third week of September.

We asked Craig if he was happy with the finished episode. “Generally I was satisfied that it was a fair representation of my time in the house although one scene was taken out of context which proved a bit of an embarrassment. The production company also omitted scenes of me playing the piano, singing and passing my driving test, none of this made the final cut which was disappointing.”

Craig has a vocal coach and recently added horse riding and combat training to his CV. These have been invaluable in his latest film project which is currently in production at Pinewood Studios.

‘Snow White and the Huntsman’ is a contemporary and far darker reworking of the classic fairy tale which includes fight scenes, computer-enhanced effects and hours of pre-filming preparation for prosthetics, make-up, hair and costume.

“My day starts at 2.30am, followed by five-and-a-half hours in make-up to be ready and on set at 8.00am. They are long days and very tiring but I enjoy every minute.”

This fantasy adventure version is being directed by Rupert Sanders and stars members of the cast of Twilight Kristen Stewart, Chris Hemsworth and Charlize Theron and more seasoned actors such as Bob Hoskins, Ian MacShane, Eddie Marsan and Toby Jones. Craig will finish filming at the end of December ‘Snow White and the Huntsman’ is due for release in June 2012 by Universal.

Meanwhile, Craig is under new management and is working on his presentation skills which he hopes to use in a new documentary.

Asked what his ambitions are he said “I would love a part in musical theatre or to play Peter Pan. It’s a role that I have always wanted to do, particularly whilst I am still able to perform the flying scenes which are physically very demanding.

Craig may be only 4ft 1in (and a bit) tall but he is not short on wit or intelligence to pursue his career and deserves success wherever his talent and versatility takes him.

Episode six of Seven Dwarves which spotlighted Craig can now be seen on Channel 4’s on demand service, 4OD.