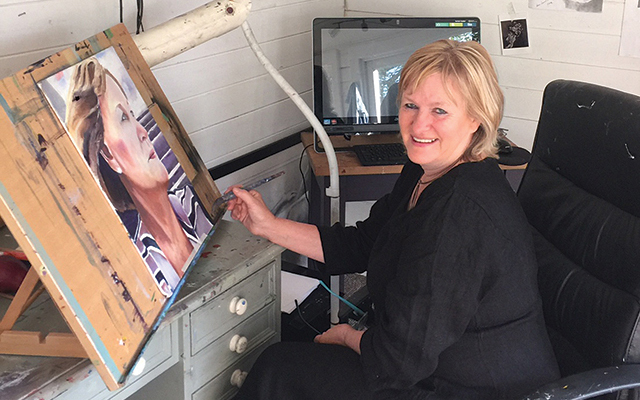 For most people retirement signals a slowing of pace and the beginning of a more relaxing lifestyle – but not for Lincolnshire woman Annie Samuel, who is using the time to launch a second career as an award-winning artist.
Annie (63) used to run her own business designing and making bespoke items of furniture but has swapped her tools for pencils and paints and is already garnering critical acclaim for her pieces, which she describes as edgy and against the grain.

This year she was pre-selected for both the Sunday Times Watercolour and the Pastel Society Competitions and was also shortlisted for the UK’s leading award in contemporary drawing – the Jerwood Drawing Prize – for her piece ‘Internal dialogue of childhood memory, Longniddry beach’.

“I’ve always enjoyed being creative,” says Annie, who lives in Woolthsorpe-by-Colsterworth, near Grantham.

“I especially loved painting and drawing when I was a child, but when it came to a career I was encouraged towards accountancy rather than anything artistic.

“Then I had my family and preferred being self-employed. I was working as a demonstrator at a show when I met a man who made his own furniture and I eventually went to work with him.

“After he died I set up my own business in 2000, designing and making bespoke pieces for clients across the country, taking into account their own individual needs. Every piece was different.

“It was on a world cruise in 2006 that I picked up the art bug again – there was art every day and I started painting and drawing,” Annie recalls.

On returning home Annie enrolled on a part-time fine art degree course at Nottingham University, spanning six years from 2007 to 2013. Although it was hard work fitting her studies around her day job, she was delighted to graduate with honours.

Sadly Annie’s husband Tony became very ill in 2013 and passed away and it was several months before she could bring herself to draw again.

“I didn’t paint or draw much in 2014 and when I did it was stuff that was very cathartic – I only really started coming out of it a year ago. I like my work to have a narrative so I tend not to do landscapes, birds or much still life.

“Other pictures are inspired by my own childhood memories or by people on the edge emotionally – they are just the tip of the story.

“I do not want my work to be passive; I want it to have an effect. I believe the function of art is to enable the viewer to access that space inside their own head,” she says.

One of her original paintings – Blackcurrant tarts – came about after she baked a batch and was taken with how they sparkled in the sun while sitting on the plate in the window. She took a photo and made her drawing from the image, which went on to win a prize. The piece was also pre-selected for the Sunday Times Watercolour Competition in 2012.

Annie, who works in a large summerhouse at the bottom of her garden overlooking Woolsthorpe Manor – once the family home of Sir Isaac Newton – works in pencil, while the majority of her colour work is done with acrylics and oils, which she has recently turned to again.

She is open to taking commissions if it suits her style and has sold some of her pieces to an interior design shop, while others have been snapped up by friends and family.

September has proved a busy month for Annie, who was not only thrilled to be showing her work in Stockport gallery EPOK, but it was also when she travelled to London to find out the outcome of the Jerwood Drawing Prize.

The award is a joint initiative led by Professor Anita Taylor at Bath Spa University, School of Art and Design, and supported by the Jerwood Charitable Foundation through its contemporary gallery programme Jerwood Visual Arts.

Now in its sixteenth year, the winner receives £8,000, with £5,000 for the second placed artist and two student awards of £2,000 each. The exhibition provides a platform to showcase the work of drawing practitioners, from student to established, and as a project helps to define a wider understanding of the role and value of drawing in creative practice.

This year sixty-one works by fifty-five artists were selected from 2,537 submissions from across the UK including Annie’s, which was inspired by her childhood memory of visiting Longniddry beach, near Edinburgh, with her grandfather. Although she did not win, she was thrilled to make it onto the shortlist.

“I was waiting for a friend in the pub when I got the email to say I’d been shortlisted for the Jerwood. I just wanted to hug myself – I didn’t expect to win, it was just wonderful to make the cut, especially when you consider there were more than 2,000 entries,” she says.

“I went to London with my sister and it was the most brilliant, amazing experience just to be able to take it all in.”

When she’s not busy in her studio, Annie also plays several instruments including the harmonica, penny whistle and piano and also sings in a couple of folk bands as well as with her three children and six grandchildren who are also quite musical. She also helps out with art at a local primary school.

“I’ve been really busy just lately focussing on the gallery showing – I did five pieces in August while everyone else was on holiday and now I’ve got lots more ideas going around in my head.

“But that’s the beauty of working at home: you don’t have to stick to traditional hours. I can go and draw whenever inspiration strikes, although the downside is that it can sometimes be lonely.

“Now I’m thinking that I might like to approach a few more galleries and see how I go. I’m hoping the Jerwood shortlisting will add a bit more interest to my work.

“If I’d been told five years ago this would all be happening, I never would have believed it. Sitting in the taxi on the way back from the Jerwood it all felt just so surreal – but I’m really enjoying it.”

To find out more about Annie and her work visit www.anniesamuelartist.co.uk