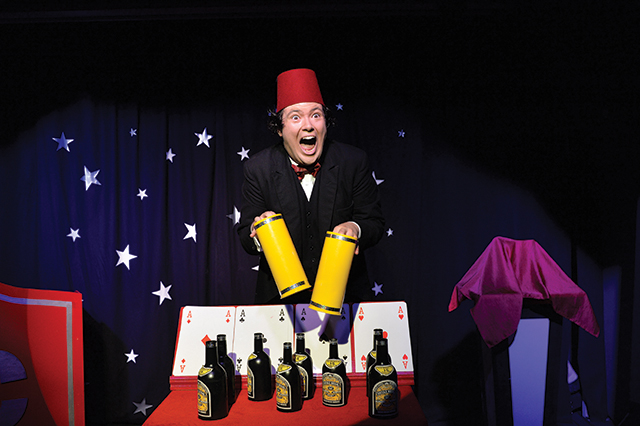 Hambledon Productions has been bringing live theatre to local communities for 10 years. John Hewer, co-founder of the Lincolnshire based company, tells Lincolnshire Life why he has stuck to his roots.
I first got a taste for theatre when I accompanied my mother to rehearsals at the Louth Playgoers’, at that time based on Newmarket. The production was that all-time classic Charley’s Aunt and it was Mum’s first step into the world of amateur dramatics. She was the curtain operator; a role which, traditionally, doesn’t require a designated person, but at this particular theatre, the winch used to operate the ‘front tabs’ was nowhere near anything else. I, at the age of nine, would sit next to her, on this lofty perch quite isolated from the stage, and became completely mesmerised by the acrobatics unfolding onstage. Before I knew it, I was soon packed away as an evacuee in Blitz – the musical production of the year and I knew that I wanted more than anything to be an actor. However, I chose to ignore the ‘traditional route’ of drama school and the like, instead embarking on a course in Drama and Scriptwriting at Northumbria University, thus nurturing my second hobby.

The ‘Scriptwriting’ side was inspiring. The ‘Drama’ side was, well, lacking. As luck would have it, though, a lot of my friends were having a ‘gap year’. So I put it to them: if I were to write a play, would they fancy doing it at Louth Playgoers’ new theatre, The Riverhead? They said ‘yes’ – amazingly, the theatre also said ‘yes’ to this bunch of nineteen year-olds, and my sister, Rachael, who’d completed a stage management course at the Bristol Old Vic Theatre School (another lucky strike), also agreed to direct us.

STOP!… You’re Killing Me, a film noir spoof, was Hambledon Productions’ first official venture, and so proud we are of it that we brought it back to mark our inaugural production in London’s West End at the Soho Theatre in 2012. Since then, we’ve produced several new-writing plays from local, Lincolnshire artists, including An Apple A Day, A Hard Act to Follow, Miscreation and Shakespeare in Debt. We’ve also toured popular classics like The Collector and Charley’s Aunt. In 2012, we were again extremely lucky to secure the first-ever performance rights for two ‘lost’ original episodes of Hancock’s Half Hour and in 2013 we were given exclusive permission to put on Educating Rita, which toured to twenty-five venues; both shows, again, started on Lincolnshire soil.

In 2014, I ‘took a punt’ and contacted the Tommy Cooper Estate and spoke to a man called John Miles. A conversation struck up about the possibility of staging a bona fide Tommy Cooper tribute show, to mark thirty years since the great comedian’s untimely passing. John was intrigued and asked to see an outline of the script. What followed was potentially the most deliriously happy six months of my life, spent researching vintage clips, meeting Tommy’s family and colleagues, getting hold of neglected scripts and compressing it all into a healthy mix of ‘lost’ material and well-worn classics.

John was so impressed with the result that, with the blessing of Vicky Cooper (Tommy’s daughter), he was given permission to go ahead with the project.

It was a big undertaking. To begin with, I hadn’t even been born when Tommy died. Nevertheless, we shared the same passion to want to make people laugh, I’m of a similar stature, with similar features and I’d developed a love of mimicry. The very first time I donned the fez was at a preview in my local village hall – North Cotes – in 2013. We might not have set the hall alight, but it was a starting point. In January 2014, we attempted the same again, but it didn’t really take off until we did our first ‘complete show’ at Alvingham Village Hall. The social club there is fantastic; very active, very supportive, and we’ve since paid them a visit with two more preview shows. I’m very grateful to the committee there, a great group of ‘yeller bellies’!

Since then the Tommy Cooper show has reached the dizzying heights of the West End, in a brand new bespoke venue at the Museum of Comedy. The show ran for an impressive sixteen weeks in 2014 and returned again in 2015.

Lincolnshire is such a big and diverse county, with a range of sparsely populated communities and larger towns. Our shows have been performed in the biggest spaces and the smallest spaces; in fact, wherever there’s an audience, we’re interested to pay them a visit! We go to great efforts to include rural venues in all of our tours and we’ve an ever-growing database of places we revisit on a yearly basis. The Tommy Cooper show is now touring the UK for the third time; this time we kicked off in Goxhill and Bourne.

We owe all our success to two things; firstly: the support and commitment from our family; secondly the support from our local countywide audiences and creatives. Our production A Fistful of Spaghetti has recently enjoyed a week at the Leicester Square Theatre in the heart of London’s West End – it first saw life in a pub off the A16!

No matter where our shows may go, we’ll always premiere our new work in Lincolnshire, that’s where our theatre work began, and where we owe a debt of gratitude for a decade of audience support.

You can find out more at: www.hambledonproductions.com