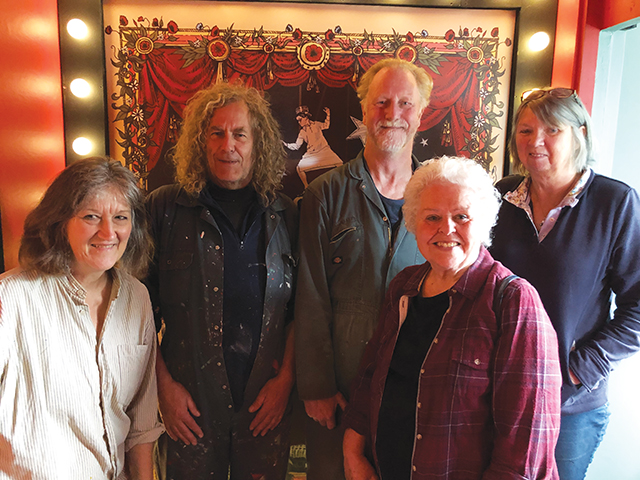 Wickenby is home to a venue which has a remarkable history and following. Caroline Bingham visited the Broadbent Theatre to hear how it is coming out of the pandemic rejuvenated in structure and style.

The members, volunteers and trustees of the theatre faced the same dilemma as many in the arts and culture sector when Covid struck. What do we do now? I met just five of them on the day of my visit but they represented the larger group of individuals who grasped the downtime to undertake some profound improvements and remodelling of the theatre as well as a rebranding for all of their marketing and signage.

I was welcomed by Dianne Bancroft, treasurer; Ted Brewer, chair of trustees and committee member Peter Thornalley. The building on Snarford Road is a former Methodist Chapel which was acquired in the late 1960s. If the name Broadbent rings lots of bells, readers can be assured they are making the right connection. One of the founding members of the Holton Players was Roy Broadbent, father of the now internationally acclaimed actor Jim Broadbent. Jim is president of the Broadbent Theatre and appeared there in his youth and in more recent years too.

One of the pictures on the staircase of the theatre shows Jim standing in the ashes of the hut, which burnt down in the mid 1960s. The purchase of the Methodist church was to create the next home to the Holton Players and later Lindsey Rural Players (who now own and run the Broadbent Theatre). Roy Broadbent was the architect of the internal space of the theatre, which seats an audience of 100. 2020 was its 50th anniversary but as with the Olympics, marking the occasion had to be delayed until 2021.

“After 50 years a fair amount of repair was needed to the fabric of the building,” said Dianne. “All of which costs money, so we were very grateful for a grant from Lincolnshire County Council and a crowdfunding campaign which has meant our volunteers could re-plaster, re-insulate, re-decorate, improve the heating, and lighting, renovate and clean all the seating and lay new carpets. We have created a new foyer and stairway entrance to give a real sense of the heritage of the theatre.”

The work has been far from superficial with extensive carpentry work undertaken by Kevin Warwick, another member and volunteer. For long established members such as Charlotte and David Broughton, who ran the theatre for many years, seeing the renovations take place has added reassurance that the theatre has been brought up to contemporary standards and will be fit for purpose for many more years to come.

We were joined by Janis Bowley, secretary, who told me about the re-branding and illustrative work which has been created by Dr Rowan Gatfield, a senior lecturer at the University of Lincoln. “Rowan is one of our members and he has taken inspiration from the theatre’s heritage as well as the nature and wildlife of our rural Lincolnshire location to weave into the illustrations for our namestyle, bar signage, foyer and brightly lit Selfie Wall,” Janis explained.

The foyer wall features a large mural of WWII land workers ploughing and harvesting as Spitfires fly overhead. The audience will now get their drinks from the Bent Broad bar whose signage features a Victorian lady contortionist, a hare, an owl and a fox in a night time setting. The namestyle itself is especially personal to the theatre, woven with red and white poppies referencing the bright field poppies of remembrance and the white symbols of peace, and appears on bright new signage on the gable end of the exterior.

Ruth Andrews was the final member to join us. Ruth has acted, directed and been a supporter of the theatre for many years. “The Lindsey Rural Players has about 82 members at present but not all perform. We hold auditions and amateur dramatists from other local groups such as Scothern Players will audition too. We are primarily a community theatre but we host touring professional groups as well. They are always impressed that we have a green room as opposed to their usual ‘cupboard’ facilities in smaller venues.”

The curtain has now gone up on a new season which opened with Rope by Patrick Hamilton, directed by Gail Dennis, who has been involved in the theatre for many years, and is one of the previous chair persons. Donald Sutherland, one of the original conscious objectors, who is now 102, recently attended the opening night.

“This is a quirky hidden gem of an asset to Lincolnshire,” said Ted Brewer. “We want to encourage as many people as possible to come along to enjoy the Broadbent Theatre, whether that is coming to a play, a film night or other entertainment. The Selfie Wall was suggested by one of our younger members and it is fantastic fun, which we hope will be appearing all over social media. We have great opportunities for young people interested in performing or working backstage to become involved.”

The Broadbent Theatre would also like input from the public as to what type of entertainment and shows they would like to see in the future.