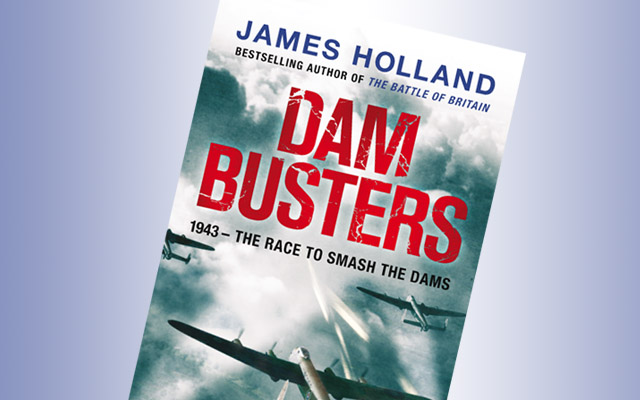 Dam Busters by James Holland
Published by Bantam Press, £20
As James Holland suggests in the introductory note in his latest book, common knowledge would have it that the Dam Busters raid was just as Hollywood has portrayed it. The much-loved 1955 film ‘The Dam Busters’ has played a huge role in shaping the public’s imagination with reference to the historic bombing campaigns against the Möhne, Eder and Sorpe dams in May 1943.

And what’s more, there’s another film in the pipeline. Yet rather than rely upon the movies, readers interested in learning about the Dam Busters would do well to read Holland’s comprehensively researched account. Drawing upon a wealth of declassified information relating to raid, Holland provides a fresh perspective. Although it may not be revelatory to those already well-versed in this aspect of history, Holland tells the story in rich detail, involving all of the figures who contributed to the raid – rather than simply boiling it down to the well-known trio of Barnes Wallis, Guy Gibson and his dog. Beautifully illustrated with photographs, maps and illustrations, the book is strong in carefully contextualising the raid, describing the military and engineering aspects involved, and the human courage.

Despite being a significant episode in the Allied campaign against the Third Reich, and one of Lincolnshire’s greatest claims to fame, there has previously been only two respected books concerning the Dam Busters. The story certainly deserves retelling and this book is highly recommended above others for newcomers to the subject matter. YS

GONDARIAN BY RAE ANDREW
PUBLISHED BY HERSTORY, PRICE £7.99
Rae Andrew is the pen name of Cleethorpes born author Helen Cox, who begins her historical fantasy saga ‘The Lay of Angor’ with an action-packed narrative about the clash of two cultures. Telling the story of King Thorund’s search for a suitor for his daughter Elinor and the arrival of stranger Jehan Sol-Lios in Gondarlan, the author packs plenty of energy into her writing from the first page, with colourful turns of phrase and lively description bringing this ambitious literary creation to life. Andrew adds bawdy and brutish elements to her story, and there is some strong language, perhaps not suited to some readers. Recommended for readers who delight in being whisked away to mythical kingdoms. ‘Gondarlan’ is available now from
the Lincolnshire Shop. www.lincolnshireshop.co.uk

LINCOLNSHIRE AIRFIELDS IN THE SECOND WORLD WAR BY PATRICK OTTER
PUBLISHED BY COUNTRYSIDE BOOKS, £12.95
Reprinted ahead of the Queen’s unveiling of the new Bomber Command Memorial at Buckingham Palace, this informative book can now reach new, interested readers. The build up of the RAF air offensive after 1940 and the arrival of squadrons from America, Australia, Canada and Poland, meant that by early in 1945 in Lincolnshire alone, there were several thousand aircraft and 80,000 personnel. Their stories are told here.

‘Lincolnshire Airfields in the Second World War’ is available now from the Lincolnshire Shop. www.lincolnshireshop.co.uk