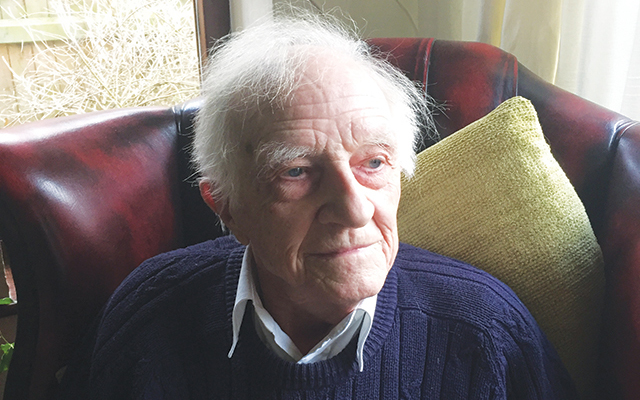 In February this year The Times reported on a manuscript that had been received unexpectedly by the publishing firm Hodder and Stoughton. The sender of the brown paper package was ninety-year-old Frank White, a Marshchapel based writer whose previous novel for the Hodder imprint had appeared fifty-three years previously.
The new book he had submitted for consideration was There Was A Time, which centres around the lives of Lincolnshire villagers at the outset of the Battle of Britain, and was intended to capture the mood and the incidents that characterised life during that time – the first hand experience of which, White realised, is shared by few today.

Born and raised in Manchester, White developed an awareness of the drama of wartime as it is lived from an early age. His father had been one of the Old Contemptibles of the First World War and it was while tending to his allotment with him that the thirteen-year-old Frank witnessed an attack on Manchester by a low-flying Heinkel as part of a Luftwaffe raid.

As soon as he was old enough, White himself volunteered for the British Pacific Fleet with whom he served for the rest of the Second World War. This was a life in which writing was integral.

“All men of course spent a lot of time writing letters home and that applied to me,” he said. “I enjoyed writing so I tried my hand at fiction and I sold a piece to the Sydney Sun, out in Australia. I got a guinea for that. Then when I came home I carried on doing the same thing. I went on to write two novels, A Morse Code Set and A Feast of Cannibals.”

Other projects over the years have included plays for BBC radio and for civic theatres, focusing on local history, but writing was not White’s main source of living. After working for many years as a journalist and editor, and as a publicity manager in Yorkshire, White suffered two heart attacks aged forty-two. Desiring a change of lifestyle and a livelihood for his family of five children, he took over the tenancy of a pub in Oxspring, South Yorkshire with his wife June.

But the writing continued and White was later offered a job as writer in residence at Lincoln Theatre Royal, where he worked in the 1970s and 1980s.

“I was commuting to Lincoln and discovered Lincolnshire. We lived at Fotherby and then Grasby before coming to Marshchapel,” he explained

White retired in 1986 and the east coast surroundings would provide plenty of inspiration when he came to write There Was A Time.

He said: “The village in the novel does not exist, there are a lot of names like Fotherby for verisimilitude but there was no village I could think of on the coast that had a manor house, a big house, no village that I could think of that had all the features I needed – so I invented one.”

White’s knowledge and interest in the First World War had led him to research and write a non-fiction publication, The British in the First World War, in 2013. But for There Was A Time, which he worked on throughout one summer three years ago, White wanted to convey the mood of the Second World War. Rather than drawing upon specific people he knew, he created characters that would bring across all the various sorts of lives connected by war, and the sense of community that pulled them through.

“I was thirteen in 1940 and I lived in Manchester,” he recalled. “I remember the atmosphere, the way people spoke, general attitudes to life in those days. And the overall mood of those six months. All the stories are characteristic of the things that happened then, incidents and things. I can’t say I had anybody in mind.”

The novel threads together the lives of many of the residents, from an ex-Navy Commodore, to a paperboy trying tirelessly but cheerfully to support his struggling family. The reader enters the homes of lovers left behind by soldiers and shares in the conflicts faced by clergymen torn by loyalty to the country and to their families. The moral difficulties and the material hardships felt during six months of 1940 are conveyed confidently through the interweaving threads that White follows.

“When I start something like that I do it intensively, I write more or less all day and all evening. It took just over three months to write,” White says.

Rather than portraying the village as an idyll of warm beer, cricket and church services disrupted by the demands of wartime, White reveals the hardships, the betrayals and the secrecy of everyday lives as well as the sense of togetherness on which those lives rely – both during and after wartime. Through the references to nightly radio broadcasts and popular songs played, White also gives us the sound of the period – the language, music and noise of wartime.

He said: “I was hoping to get a sense of the village and the things that were happening at the time. I went chronologically through those six months and tried to fit in what was happening in the background of the village. And then the characters appear at intervals, as and when things happen to them really. So it’s episodic in that sense. I tried to keep them all alive, reappearing from time to time.”

This is not about the horrors of the front. White shows how the uncertainties and fears of wartime serve to aggravate the tensions and difficulties that characterise ordinary lives. Still, there is warmth and humour.

“It’s easy to romanticise it, I’ve done my very best not to,” he said. “But I tried to make the work amusing here and there. I think all novels should be entertaining. They were grim times, but this is the whole point: there were high spirits, a tremendous sense of ‘We will survive, we’ll win’. And people did relate so closely to together. Life was quite lively at the time.

“This is a very warm-hearted and compassionate country and if people could only realise and acknowledge that and behave accordingly this country could again be as great as it was in 1940. I believe it.”

Taking the story up to New Year 1941, the uncertainty of wartime is explored within a neat narrative arc, linking the many characters together in a circle. Throughout the story, a third person narrator reminds us of returning characters, but this is unnecessary. White depicts unique, worried, caring individuals who it is not difficult to warm to and who are memorable. It is the very generosity of people and the spirit that endures amid bleak prospects that White manages to express while not averting his gaze from the difficulties that we face.

“Life is a hell of problem, but you see it through as best you can, relying very often – practically all the time – on other people.”

There Was A Time by Frank White is published by Hodder and Stoughton and is available now.