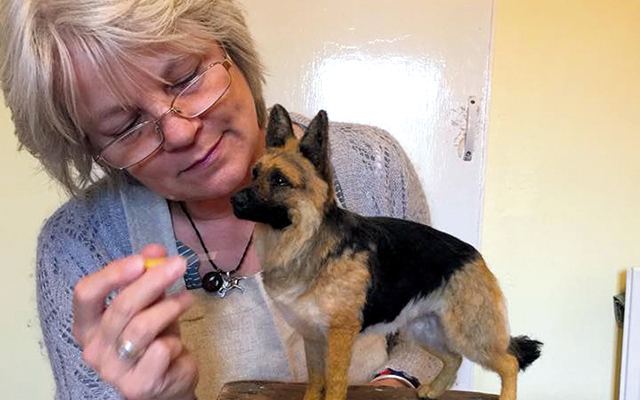 When Cindy-Lou Thompson taught herself to needle felt she had no idea her creations would prove so popular with dog owners seeking a lasting memorial. Kate Chapman discovers how a pastime has turned into a business.
Cindy_lou uses her talents to make miniature 3D sculptures of breeds including German Shepherds, Poodles, Terriers and many more, which are so lifelike some people believe they are real dogs.

What’s even more surprising is that she only started learning to needle felt – where objects are made with wool fibres – towards the end of 2013 when she began looking for a creative outlet while recovering from serious illness.

“I’ve always been quite arty, but I was looking for something that I could do while I was recovering. I saw this Japanese lady on YouTube who was needle felting cats and I just remember thinking that looks amazing,” recalls Cindy-Lou, of East Kirkby, near Boston.

“At that time no-one here in the UK was really doing it, although it was popular in America, Russia and Japan.

“There was nothing really on the internet to tell you how to do it either, unless you paid and I didn’t have the money to do that, so I found out where to get some wool, learnt to wash it and card it and bought some needles from America and started doing it myself.

“I’m completely self-taught. It’s taken me around four years to get to this level.

“Wool is such a versatile fun medium to work with, and I am constantly amazed with the possibilities of this fibre, from clothing, furnishing and insulating our homes to beautiful works of art to admire.”

Before Cindy-Lou launched Chicktin Creations, she and husband Alan spent many years travelling the world in a self-converted truck, taking in the sites of far flung destinations including Asia, the Chinese border and north Africa.

It was shortly after they decided to settle down in Lincolnshire that Cindy, who has a long-standing kidney condition, fell ill.

“I started getting a lot of kidney infections, and after a particular run of several Alan found me unconscious on the floor in the small hours of the morning after I’d gotten up to go to the bathroom.

“I had sepsis. I was rushed to hospital; and it was that close, had Alan not found me I would have been gone,” says Cindy-Lou.

The infections continued for several months, Cindy-Lou was in and out of hospital, in a lot of pain and could not really move around much.

“Instead of popping pills and feeling sorry for myself I decided I would start crafting again to give me something to focus on and that’s when I decided to try needle felting,” she said.

“I got some wool from a local sheep shearer, swapping him a couple of jars of homemade marmalade and some eggs from our chickens in return for three or four fleeces.

“I then had to learn how the felting needles worked. That proved much more time-consuming and required some patience, but with time on my hands I was able to perfect their use.

“Each sculpture teaches me something new, which might be a differently shaped nose, or coat colour and texture, or unique eyes, resulting in pushing my boundaries of knowledge and experimenting with different mediums to enhance features,” she adds.

Standing around 14cm high to the shoulder, Cindy-Lou’s pieces are based on a simple wire frame, covered with core wool before the top wool, which is fluffed and stretched to give it the appearance of fur, is applied.

She decided to focus on man’s best friend because her own family has always had a close association with them, breeding them as well as running kennels, although she does make other creatures too including lions, cheetahs and warthogs.

The requests began to come in after a friend saw her work and asked her to make her a sculpture. From there she progressed to selling one a week on eBay before the commissions started taking over.

Cindy now sells her pieces – which cost in the region of £300 each – online through Etsy and social media platforms including Facebook, Instagram and Pinterest, sending them all over the world to countries including America, Taiwan, Canada, China and Australia.

“It’s taken off in a far bigger way than I ever expected it would,” says Cindy-Lou, who has also won awards for her work.

“It’s a really good hobby for me as it’s really creative and does not take up a lot of space at home.

“The majority of commissions come from pet owners who are seeking a lasting memorial of their beloved dog. I work from photos they send me and I just love the challenge – I make all the accessories myself too, like the collars and leads, I’ve even done a string of sausages.

“I think my favourite one to make is the German shepherd – they are a real challenge because of the gradient of the colours, but I think they are a beautiful, noble breed.

“I’ve had a number of strange requests, with people asking if the father is for sale, do I export to the USA because they need one of my dogs for their bloodline, and asking when the next litter is due. I’ve even been asked what I’m doing to the dog to breed it so small – people really think they are real, it’s quite funny!”

As for the future Cindy-Lou intends to keep her venture part-time, but hopes to continue expanding her skill set. She’s recently started using polymer clay to help make the dogs’ mouths and would also like to introduce glass cases to cover her sculptures and give them the look and feel of taxidermy.