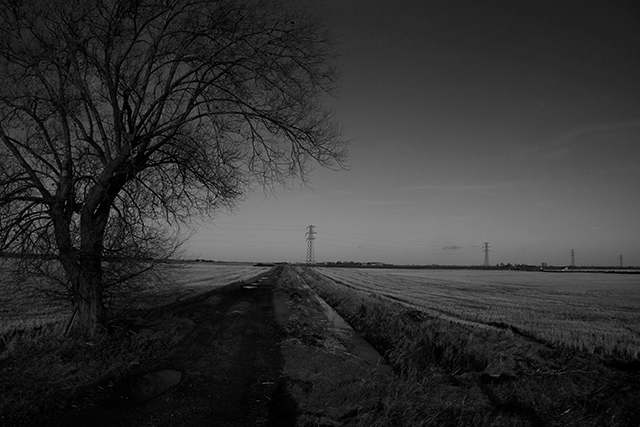 Chasing Hares is published by Salt Publishing. To order, visit www.saltpublishing.com/products/chasing-hares-9781784631895. If you would like to follow Christina’s blog, visit www.christinajamesblog.com.

Novelist Christina James explains how the distinctive landscape of South Lincolnshire has shaped her popular DI Yates series.
When I began to write the DI Yates series, I was inspired by my knowledge of the South Lincolnshire Fenlands and determined to set them there. I think it is important for a crime writer to convey a sense of place and I know this area better than any other. I also wanted to set the novels somewhere that hadn’t been recently over-exposed by other novelists – although, historically, certain distinguished writers have explored the county through their work, including Charles Dickens (in Bleak House) and Dorothy L Sayers.

The land is the quintessential feature of the Fens. From time immemorial, it has determined how the towns and villages have developed – or stayed the same. Because the rich, fertile soil must be kept drained, the fields have been serviced by the pumping stations that criss-cross the landscape; they’re bounded by the massive dykes that were first introduced in the 17th century. Deeper than some rivers, these dykes can be treacherous to the unwary: more than one motorist has vanished during the snowy winter months and been discovered, trapped and long dead, in their car the following spring.

The dykes, however, are no match for the majesty of the River Welland, as it snakes its way through my home town of Spalding. Over the ages, the Welland has gouged a deep course in this part of its journey, a sort of ravine dividing the town in two. The Welland features in several of the DI Yates novels. The conference that is taking place during the opening scenes of Almost Love is at Welland Manor, which I based on Ayscoughfee Hall, the 14th-century manor house that stands opposite the river in Churchgate, Spalding.

I was the last person in my family to work on the land. From the ages of 11 to 21, I topped up pocket money and student grants as a ‘seasonal casual’, picking strawberries, beans and peas and cleaning bulbs. The other agricultural jobs were dirtier and more back-breaking; and could be dangerous. Local women and children out to make a little cash were often intimidated by gang-women and other organised seasonal workers.

My family had long been close to the soil. My Great Uncles Bob and Dick both farmed smallholdings and my father and godfather had an ‘allotment’ (it consisted of about four acres) on the site where Springfields stands now. Uncle Bob was also a railwayman; the railwayman’s house which is destroyed by a derailed train at the beginning of The Crossing is closely based on his tied cottage. The train accident really happened at this house, in the winter of 1970. I went to see the ruined building afterwards and found the official police account of the incident when I was researching for the novel.

The De Vries family, who live in the titular Sausage Hall, own a number of agricultural businesses and employ many of the land workers in South Lincolnshire, not all of whom are fine, upstanding citizens. The De Vries are composites of members of several of the wealthy farming families I encountered as a child, either through school or my father’s work at the British Sugar Corporation. Both Sausage Hall and the novel I am currently working on feature fights and disputes between land gangs.

Although I didn’t appreciate it at the time, there was still a timeless quality to land-work. Because the soil was often too heavy for the sort of tractors then available, some farmers had continued to use giant carthorses to pull the plough. Women protected their heads with home-made bonnets – frequently made of gingham – that could have been borrowed from a set of Tess of the d’Urbervilles.

There are two wonders of nature that visitors to Lincolnshire always notice: the magnificent sunsets and the all-enveloping fogs. Chasing Hares, the latest novel in the DI Yates series, is set mainly on a small island on the River Welland. When the story begins, the island is shrouded in fog. The novel is in part a modern take on a 1930s country-house crime mystery. It tells the story of Gordon Bemrose, a catchpenny charlatan who decides he can make easy money by organising a crime mystery weekend at his house on the island. He attracts a motley collection of people, none of whom, it transpires, is there because they’re interested in his crime event. Gordon, his guests and the people he’s drafted in to entertain them are trapped on the island as the fog grows worse outside. Inside the house, they suffer fear from the mental fog caused by their own lack of understanding and failure to control what is happening: they’re menaced by unidentifiable dangers.

The sub-plot of Chasing Hares was suggested to me by some real Lincolnshire policemen who are DI Yates fans. It’s about hare coursing. Hare coursers often come into the county from other parts of the country. They arrive at a pre-arranged spot in remote farmland, practise their cruel ‘sport’ and leave again, making them hard to catch: the Fens cover more than 1,500 square miles and some of the farms are very large, while the population is sparse and scattered. It was not difficult to imagine the hare coursers taking temporary command of the flat, bare fields that I know so well, especially during the winter months when they’re stripped of crops, allowing ‘sight’ hounds to see their quarry.

Like all places, South Lincolnshire doesn’t stand still in time, though some things may change slowly there. The population of present day Spalding is twice that of the town of my girlhood. Superficially, things are very different, but the land still lies at the heart of it all, eternal, unyielding, sometimes harsh and still mysterious. Perfect for a novelist.