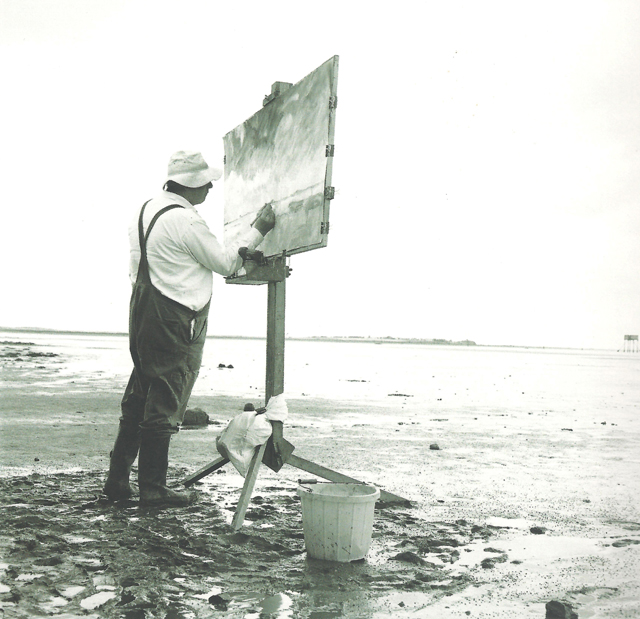 Life along two great rivers is the subject of a new exhibition at Grimsby’s Fishing Heritage Centre called ‘The Humber and the Tees’.

Artist Len Tabner is showcasing dramatic paintings of his native River Tees alongside images and objects about the River Humber taken from the North East Lincolnshire Museum collection.

The River Humber and Tees have a lot in common yet there are ways in which they differ. This exhibition will show the complex and varied history of these two great rivers together with the work that is being done to balance the delicate ecologies with the industrial trade that travels along them.

The exhibition is now on and runs on until Sunday, 8th January and is free to view. It is curated by staff from North Lincolnshire Museums Service, as part of the shared service arrangement with North East Lincolnshire Council.

Councillor Mick Burnett, portfolio holder for health, wellbeing, tourism and leisure, said: “We are honoured to be able to showcase the magnificent work of Len Tabner at the attraction. His contemporary paintings of the River Tees show the power of the river and its dramatic landscapes.

“To exhibit his work alongside objects that explore how local people’s lives have been changed by their proximity to the River Humber and Tees is a great way to celebrate the importance and beauty of these estuaries.”

Len Tabner is an award-winning artist who was born in 1946 near Middlesborough. Tabner has long had a close connection with the Tees and the sea. His father worked on the Tees and Tabner grew up near the busy estuary. He now lives on a high cliff overlooking the North Sea. A sailor all his life, Tabner spent some time as a fish packer on the Ross Anson.

Since his first one-man exhibition at Middlesborough in 1973, Tabner has exhibited widely. His paintings can be found in the British Museum, the Laing Art Gallery and Japan’s Gifu Memorial Museum among many others.

Items being exhibited from the North East Lincolnshire Museum collection include early maps and charts of the Humber, a model of Lincoln Castle and images including the Bronze Age boat found at Brigg in 1886 and paddle steamers that once serviced the county.

Being tidal estuary rivers, the Humber and the Tees rivers both have problems of erosion and hazards to shipping, and both have become industrial centres. The decline of traditional industries like fishing and the steel industry on Teesside has been offset by the growth of the petrochemical industry. Resorts like Cleethorpes and Redcar show the use of the rivers for leisure and relaxation. The Humber is a more important trading centre than the Tees, with 35,000 vessel movements in 2007. Much work is being done today to balance this with the rivers’ delicate ecologies.